When it is cold and gloomy, one of the best things you can do is to go to a bathhouse – as I did yesterday, while the cold spell is back to the US Northeast. New York City has several options. The biggest one is probably the Spa Castle with Korean saunas in Queens, but if you prefer a more central location, Russian & Turkish Baths in the East Village is a good choice. Some friends of mine don’t like its dated look, but I actually find that low key style appealing; the room of Russian sauna (banya) looks as if it has not been renovated since the opening of the bathhouse in 1892.

Although the bathhouse is called Russian & Turkish Baths, it has also two Finnish saunas (dry and hot), in addition to two hammams (Turkish steam room, relatively mild temperature), and a bigger banya (Russian sauna, very hot but with humid air, sort of a mix between Turkish and Finnish ones). There are also massage rooms with treatments (e.g. mud scrub). But my favorite treatment there is actually performed right in the Russian sauna room. It’s a traditional Russian banya massage (aka platza, a yiddish term). It is a whole body massage that includes soap wash and whipping with oak branches. It may look a little rough, but in fact it feels very relaxing. As they claim, “the oak leaves contain a natural astringent, which will open your pours, remove toxins, and actually take off layers of dead skin”. And it does feel so. Platza is finished with a dip in the cold water pool, which is supposed to train your vascular system. Yesterday, I used the birch broom which I brought from the Ivanovskie Bani in Kiev. I first massaged two Brazilian friends of mine, and then one of them massaged me. But if you don’t have such a broom and don’t know how to do platza, you can ask local masseurs – they are really good!

On a side note, coming to the US after Germany, I have to mention that saunas here are clothing-optional only in single-sex setting. (This is also increasingly common in Ukraine and Russia.) So unfortunately for heterosexual couples or mixed-gender groups, they will have to walk around in shorts soaked in sweat… If you want to hang out naked, Russian & Turkish Baths offer one women-only and two men-only time slots.

BTW, they regularly offer special deals and discounts through Groupon, kgbdeals.com and savelocal.com, so keep your eyes open.

On the recent visit to my homeland, I spent a few days in Kiev; pretty much the only option for a naturist experience in winter was to go to a sauna. My friend Sergey found a public sauna online that sounded particularly appealing, and we ventured there with two more mates.

Ivanovskie Bani indeed fulfilled our desire for a traditional Russian sauna (banya) experience. It is located literally on the  Dnieper River, in a modified boat. It has a traditional ambience, and already in the locker you can smell “venik”, a special sauna broom, typically made of birch or oak branches, which is used for massaging. After the lockers, there is a room with showers and a massage table, and then a steam room. You can hire a local masseur to do the banya ritual for you, but we just bought “veniki” and did it ourselves. Though one of the fellow visitors thought that our massage technique was too rough and showed a milder, calmer version with softer and slower moves (but it felt like the heat penetrated even deeper).

Regardless of the kind of massage you prefer in the steam room, after absorbing all that heat, you are supposed to cool down, and this is where Ivanovkie Bani truly stand out: you can splash in the waters of the Dnieper River right outside its doors, and if you are not too shocked you can meanwhile enjoy the views of the river banks with such landmarks as Kiev Pechersk Lavra (Kiev Monastery of the Caves) and the Motherland monument.

Well, it could only get more striking in much colder weather, when the river would be frozen, as it happened when we went to a banya in Moscow a couple of years ago.

After repeating the ritual a couple of times, we felt both relaxed and energized. We had some tea before leaving in the cafe (they don’t serve any meals there, but you can bring food with you or order something more exotic, like crayfish, in advance).

Even though the location is central, it’s not easy to get there without a car (and if you call a taxi, it may take a while for them to arrive), but it’s totally worth it, especially if you want a relaxing break from the busy city life without leaving the city!

PS Keep in mind that most banyas are gender-segregated, and in this one the only women day is Wednesday.

Saunas provide an easy opportunity to have a naturist experience to laypeople and are among favorite pastimes for hardcore naturists as well, but there is a hidden and unique (please let me know, if it isn’t!) place on the Hawaii island that brings it to the next level: a combination of geothermal steam vents, small caves and lush greenery creates the most natural and idyllic steam room imaginable!

Again, I found out about this natural wonder thanks to the guidebook ‘Hawaii, the Big Island Revealed‘ – and it would be hard to know about it otherwise, as it is on private land whose owner by no means seems to want to advertise it. Luckily, he doesn’t seem to mind the visitors much either, and the place is accessible for those in the know 😉 The guidebook also noted that locals enjoy the natural steam in their altogethers, as nature intended.

So, these natural “steam rooms” are located in the otherwise not very notable forest north of intersection of Kamaili Rd and Pahoa Kalapena Rd. 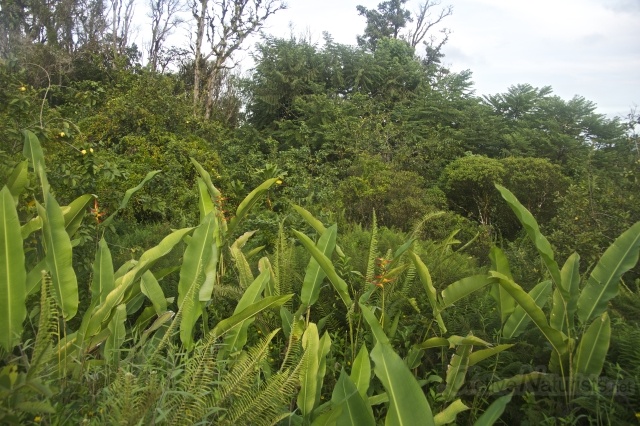 You’ll have to guess where the trails are, as they are not very distinguishable in the beginning but get better by the steam rooms.  Some of those are hard to notice behind the plants, 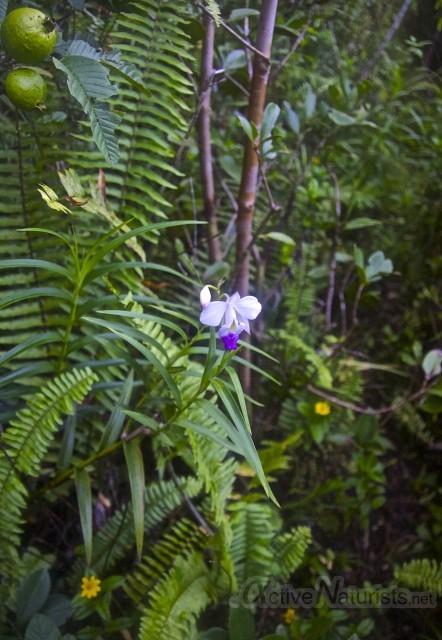 but you’ll sense the heat and see the steam. Now, how is this for a steam room? 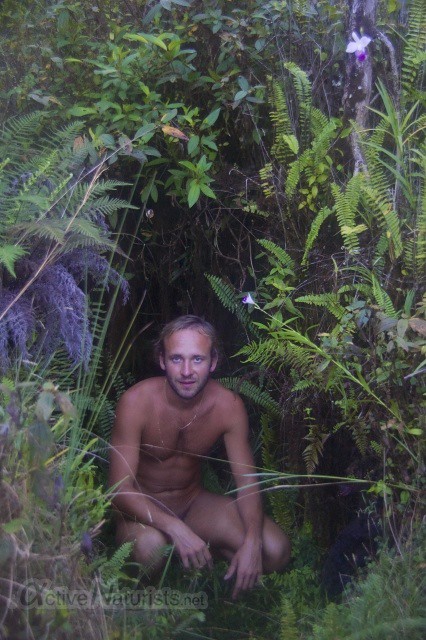 An individual cabin adorned with ferns and orchids!

If you’re with a bigger group AND have a ladder, you may go for this steaming hole in the ground!

Next to it, there was a small cave with a ladder installed already. Then, I noticed steam coming above a meadow below. 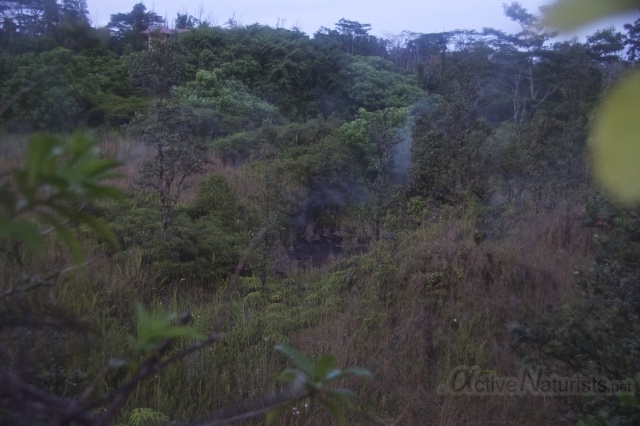 I went down there and took a chance for using the space for my personal hot nude yoga session (based on Bikram yoga sequences I used to do 2 years ago). This was a unique opportunity to do hot yoga in an open-air space, and it felt amazing. 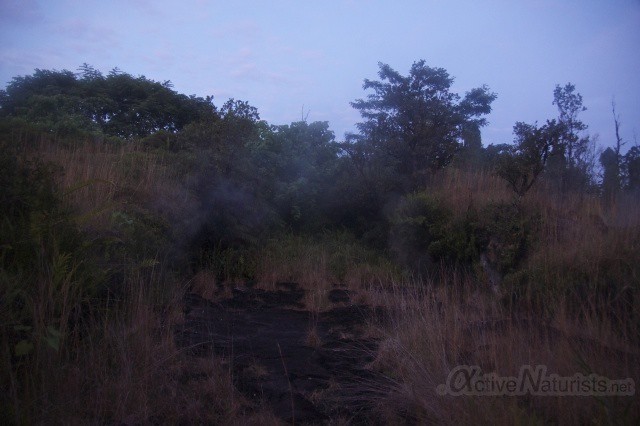 As darkness fell, I was staring at the first stars, and, getting warmed up by the heat from the depth of our planet, I couldn’t help thinking of being one with our vast universe, and my nakedness only facilitated the feeling. The lush vegetation around and the chorus of crickets and coquí frogs also reminded me that we were lucky to be in the part of the universe suitable for life; and I personally felt very lucky to be in that particular part of the universe that made me feel life was amazing!