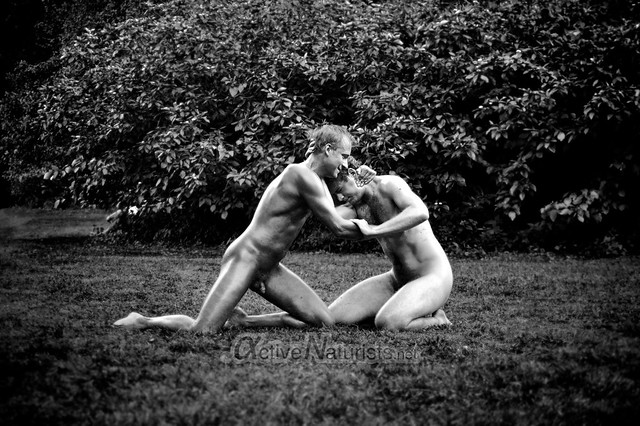 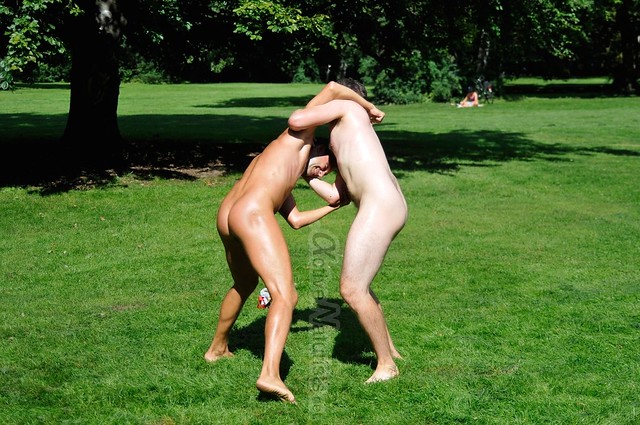 My friend Alexander Kargaltsev has recently made headlines with this image above that was taken as a protest against Russia’s ‘racism and homophobia’.

I wrote about him and his exhibition about Russian gay asylum seekers in the US more than a year ago, and now he’s staging a new exhibition – “The Last Polaroids: Friends and Lovers” set to open at the Leslie-Lohman Museum of Gay and Lesbian Art in New York on February 28.

Be sure to expect some friendly and lovely nudity, of course.

Alexander is also set for a new play, Crematorium:

Putin builds a Crematory in Russia to burn gays. Four couples are picked to test a new machine to turn them straight.

Brenton is a prolific blogger and an excellent photographer from Sydney. He contributed to our website a video and a story about his favourite nature retreat in New South Wales, River Island. Naturism and nudity in art are among his recurring themes, and now he has an exhibition of his photo works that combine both aspects, evoking the sensation of comfort in your own body and harmony with nature. He called his exhibition “Freedom” and that is exactly what it feels like.

Here are just a few samples from the Tumblr page of Brenton’s exhibition.

A short exhibition about Russian gay men who fled to the US is now on display in a small gallery in Manhattan, 287 Spring. Sorry for the late alert, but this Sunday is the last day and I just visited it today. I had a chance to speak with the photographer, Alexander Kargaltsev, and he told me the idea to show those men naked, besides the aesthetic value, had a symbolic meaning. They fled from Russia, because they were confronted with aggression and misunderstanding, and new laws in many regions, including seemingly progressive Saint Petersburg, make it practically impossible even to mention such issues in public (the so-called bans on gay propaganda). Although US is still lagging behind in terms of equality in some basic right to its homosexual citizens, these asylum seekers at least can now live openly in such cities as New York, which is symbolised by their nudity – open and free – next to some well-known sights of the city or simply on the roofs. The story made it to Huffingtonpost, and even with uncensored photos. Also, the exhibition is free and the photographs are easily visible from the street. This publicity, however, made some of the models decide to withdraw their photographs, as they didn’t want to risk security of their family members who stayed in Russia.

Its worth noticing though, that they, as any other people in New York, don’t actually have the freedom to be unclothed in public, so their nudity is really not more than a symbol. San Francisco’s legislature seems to be much more liberal in this respect, but this harmless freedom is at risk even there. Sign a petition against proposed ban on nudity in San Francisco!

Vienna hosts even two exhibitions with naked men on display in different art forms, from sculptures to paintings and photographs, and not in a small gallery, but in two major museums: Leopold and Lentos. But surprisingly, Viennese dwellers turned out to be not ready to see [male] nudity on posters in the city.

Go figure what’s wrong with it… or better go check it out and show some support. You could actually even visit it naked! Here is a link to the video from the naked day at Leopold Museum: http://www.stern.de/kultur/kuriose-ausstellung-nackt-im-museum-1973612.html