Then, tomorrow I would like to go to some naturist beach in the area, which would be either Gunnison Bay or on Fire Island, but such a trip costs 40 bucks at least! It’s certainly not something I’d do every weekend if I lived here! Nothing like going to an FKK place after work in Berlin, or a single bus ride to a nude beach in Athens…
PS By the way I’ll make a post summarizing naturist places around Athens soon, keep in touch!
The area of north-western Greece to the south of Igoumenitsa (Ηγουμενίτσα) provides many secluded beaches and flat rocks for a quiet relaxation au naturel…

We went from Ioannina, passing through picturesque mountainous landscapes,

and camped at a small beach close to Syvota (Σύβοτα).

Like at most of the Greek beaches, you won’t see any signs for nudists there and when we arrived there in the late afternoon none was clothes-free. At night, however, when others left and the temperature was still very warm, there was no reason to remain clad. When I went for a night swim, something truly special happened: as I always swim in goggles (the only thing I like to wear while swimming ;-)), I could see that my body left thousands of tiny sparkling traces in the water – it looked like golden ‘stardust’ that fairies leave when they fly around, so I called myself an underwater fay. In Sweden there is an annual competition for water fairies who play different music instruments standing in the river. Then I think in Greece there should be the next stage of the competition: for water fairies dancing in the sea at night! Then spectators will have to submerge as well, but it is not a problem, since in August the average night temperature in Greece is warmer than the average day temperature in Sweden and the sea stays warm… Biological explanation for this phenomenon is that bioluminescent plankton, which is abundant in the Mediterranean in the late summer, responds to mechanical disturbance with glowing.

When we woke up in the morning I already felt confident enough to stay naked but when I got out of the tent I saw that there was a straight couple and the man was also sans clothes. Then we swam to the rocks and jumped from them (see the video above). That man also came there and showed us a better dive. He was a friendly French guy and suggested us to show how to dive. Well, I tried just from less than half of the height of those rocks and wasn’t very successful 😦 Hope I’ll learn to dive from such height next year!

When we returned there was another couple, Greeks, who looked at us; probably they didn’t expect to see naked people there, and I thought it might be uncomfortable for them, but in fact soon they disrobed completely as well. So until a yacht with a big italian family arrived, the beach had become mostly naturist =)

which I bought in Ioannina (it is sold there as a souvenir for some reason).

Don’t worry, I wouldn’t use it against this beautiful Scarce Swallowtail

but rather to protect from the aggressive textile invaders 😀

Almost all beaches in south-west Crete are clothing-optional, except perhaps only central town beaches. Many of them are connected with famous E4 hiking trail, so you can walk between them… or maybe swim?

Well, I’m joking, Anidri and GLyko Nero beaches are quite far from each other. Glyko Nero Beach (Sweet Water Beach), as its name suggests, has some underground freshwater springs. Thus this place is ideal for camping. Just dig a half-meter hole in the send, if there are not any already, and you’ll get fresh cold water. Regardless, you won’t die from hunger or thirst there anyway, as there is also a tavern. As the beach is turned to the south and surrounded by high walls of steep rocks, 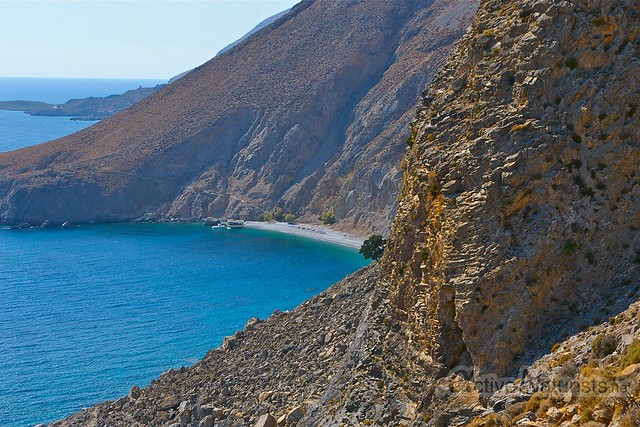 it can get very hot there unless there’s a strong breeze from the sea. But there are some trees providing good shade, 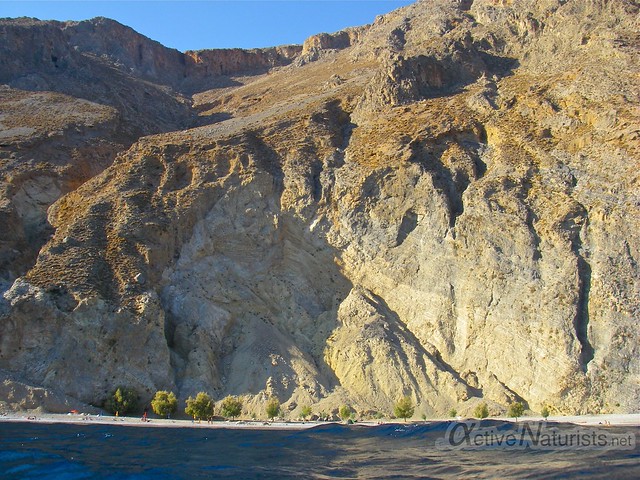 and also a plenty of umbrellas from the tavern.

We spent most of the time swimming. 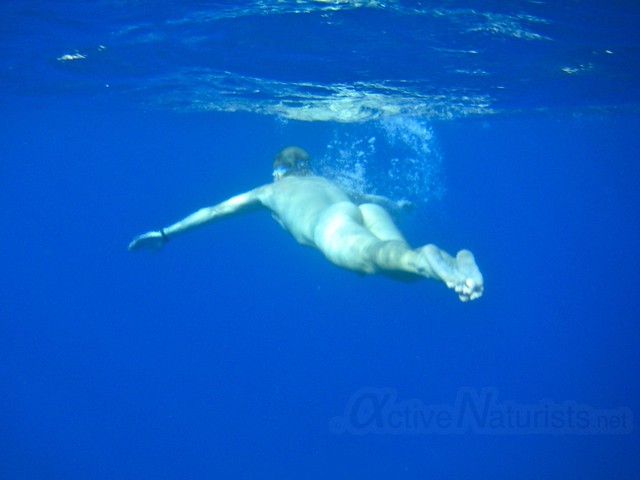 The sea water is very clean and has intense dark-blue color. 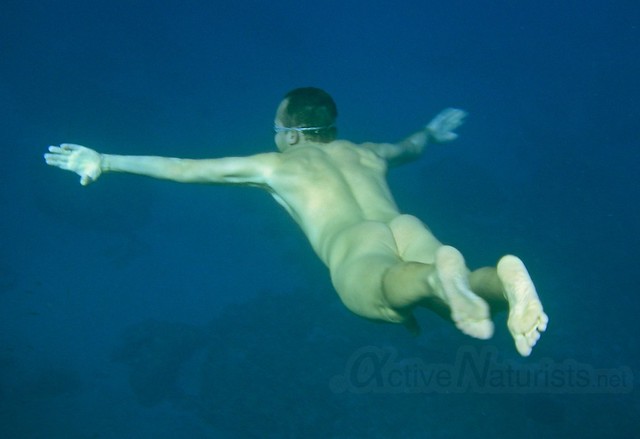 Unless you hit the freshwater spring at the water edge, it is also very warm; and certainly, this beach has one of the clearest waters I’ve seen. 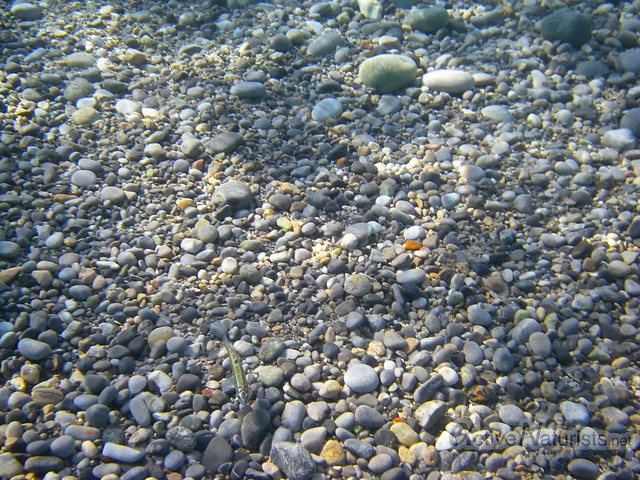 Even late in the evening it was so warm, we couldn’t help laughing about advice that we received on the previous day that we should take warm clothes and gloves for the night. 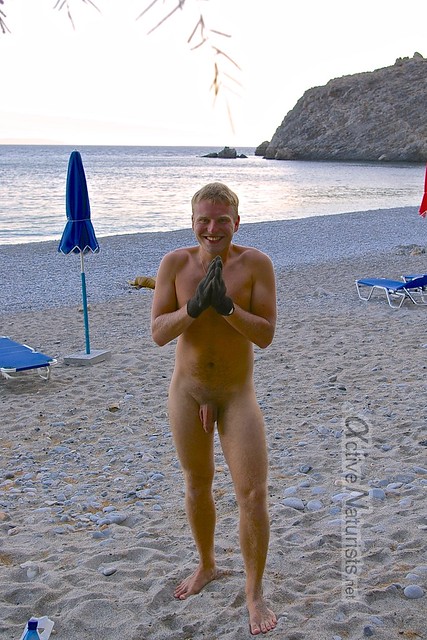 At night, thanks to the cliffs surrounding the beach, it is very quiet and dark there, because no light comes from neighbouring town. Perfect to watch stars! As there was no moon, they were so bright that Milky Way even reflected in the water! And when we looked in the water, we saw that it was full of flashing “stars” itself. Bioluminescent plankton was so abundant (at least in the end of September, when we were there), that anytime I moved my hand in the water there were flashes around, as these organisms respond to mechanical disturbance with glowing. This is why they also flash a lot, when waves break onto the shore. I would highly recommend to swim at night (with goggles) to see how the water glows around you and your swimming buddy.
However, be careful with the above mentioned cliffs – don’t build you camp to close to them, because once in while some rocks were falling down, sometimes because of the goats jumping. They like coming to this beach to drink fresh water in those man-made holes, and you can see their incredible ability to walk on nearly vertical cliffs. 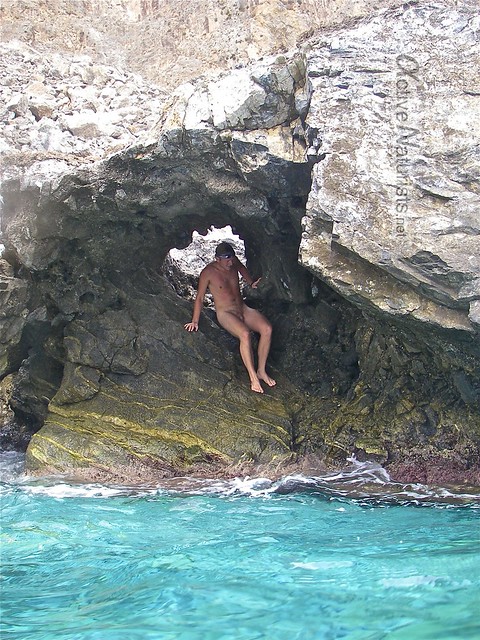 But we had fun climbing those rocks ourselves too 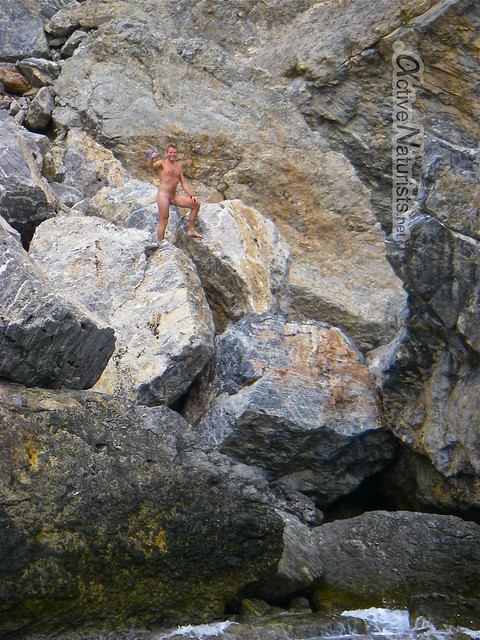 and then were diving from them. 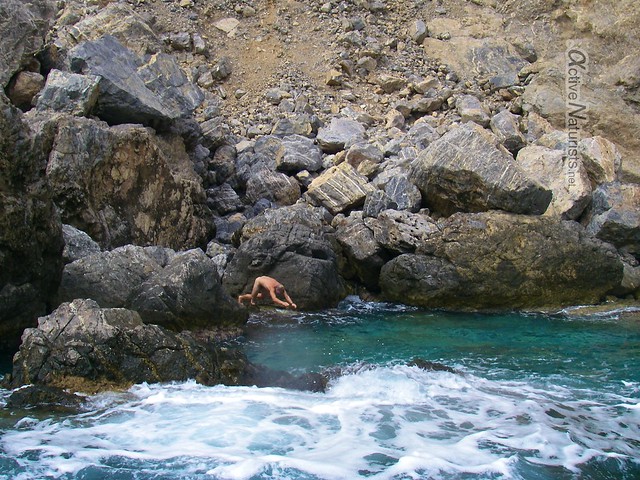 To get to Glyko Nero beach you may use a small former fishing boat which comes from Hora Sfakion directly to the tavern twice per day at about 10:00 and 17:00, or like we and many hikers, come by E4 hiking trail. From Hora Sfakion, you can also first go by car in the direction of Loutro till the sign E4 Glyko Nero/Sweet Water Beach. However you get there, you’ll surely love this beach! 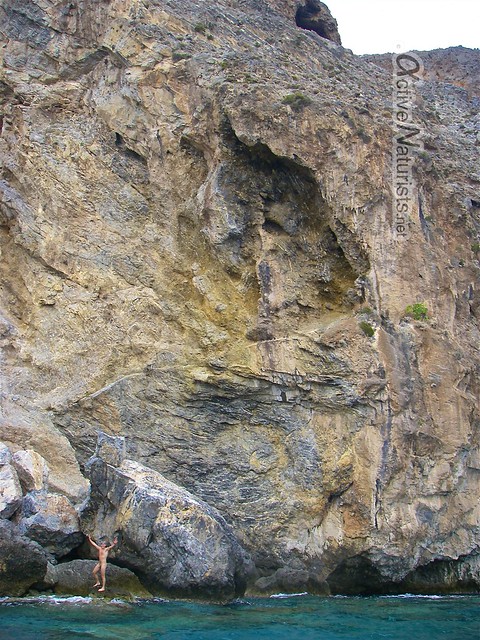 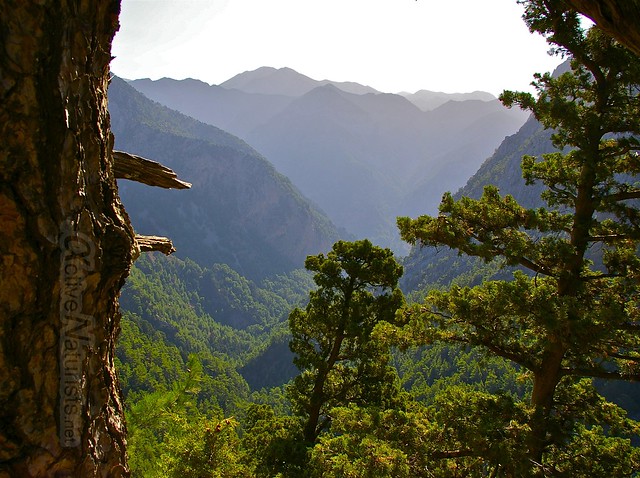 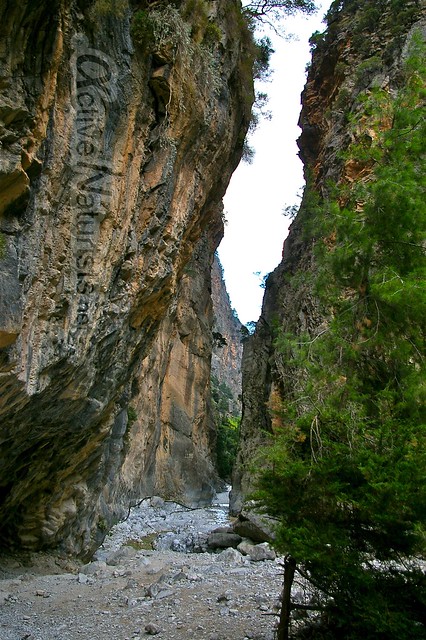 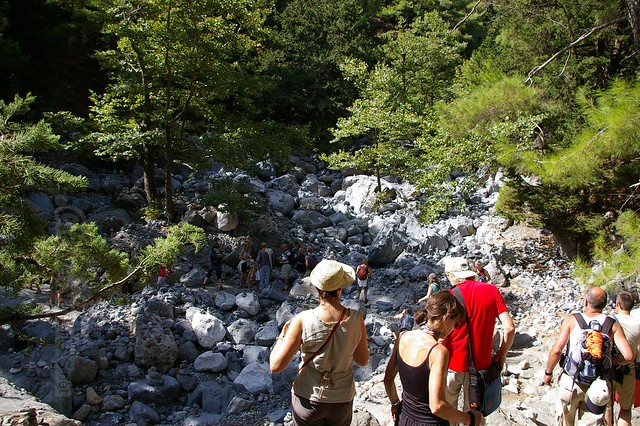 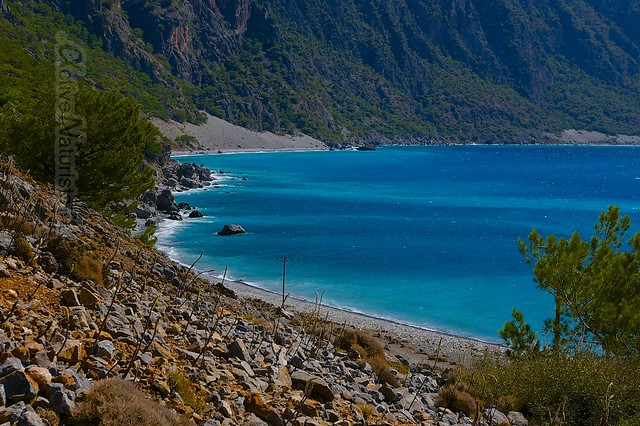 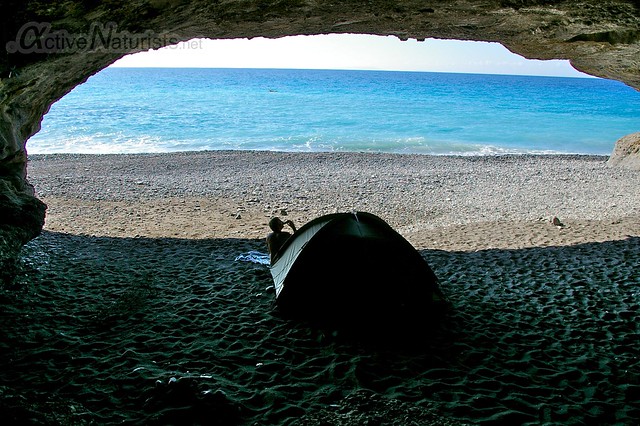 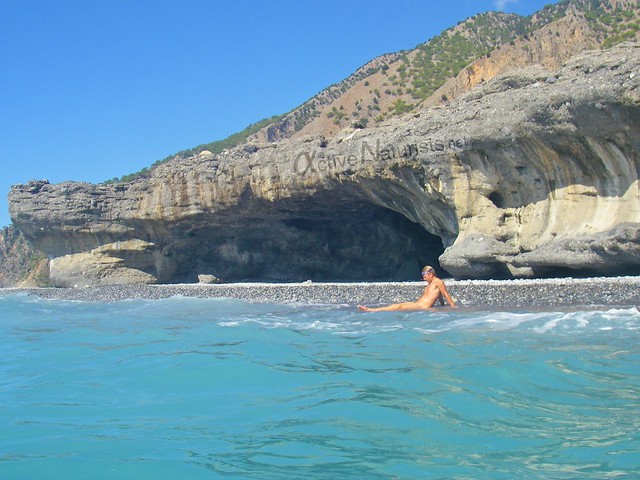 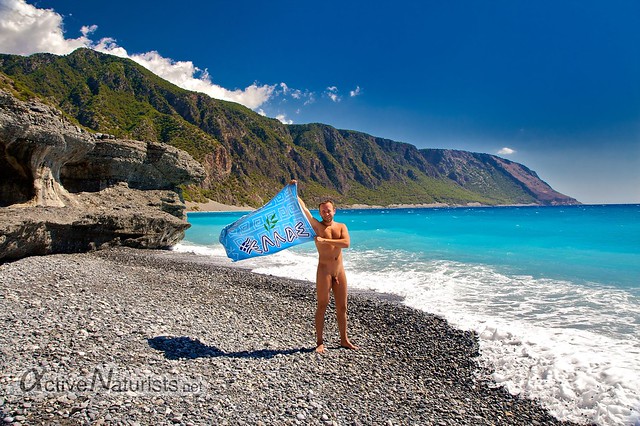 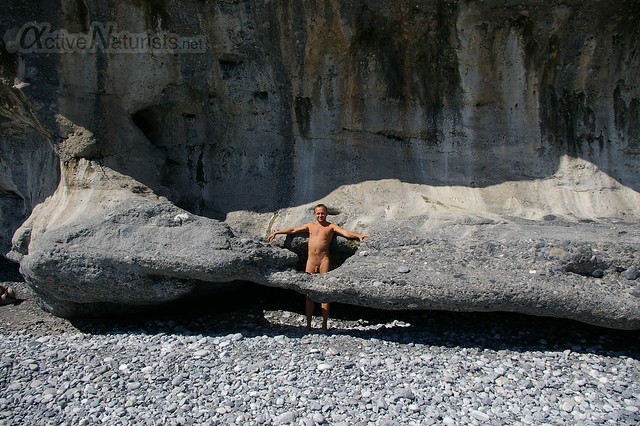 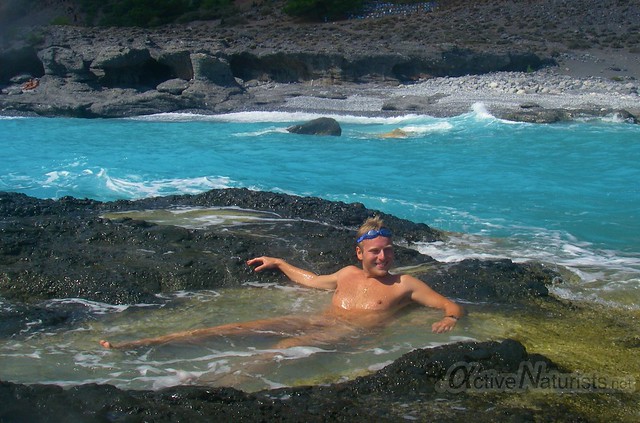 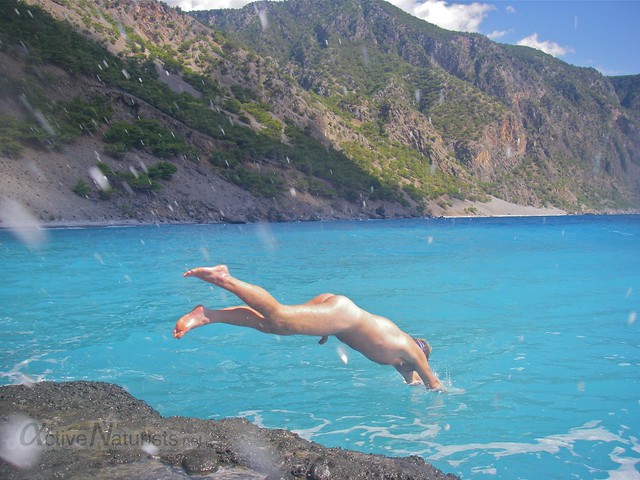 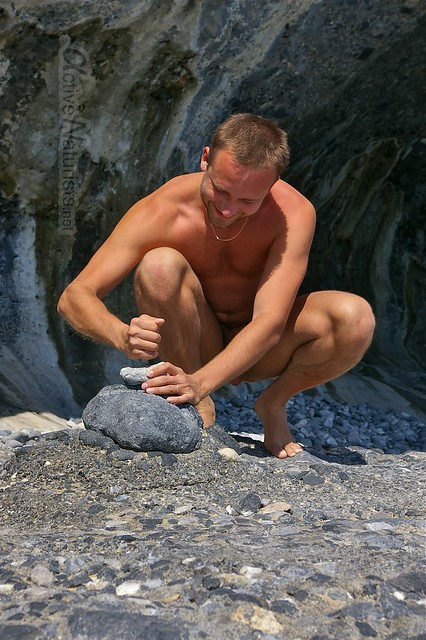 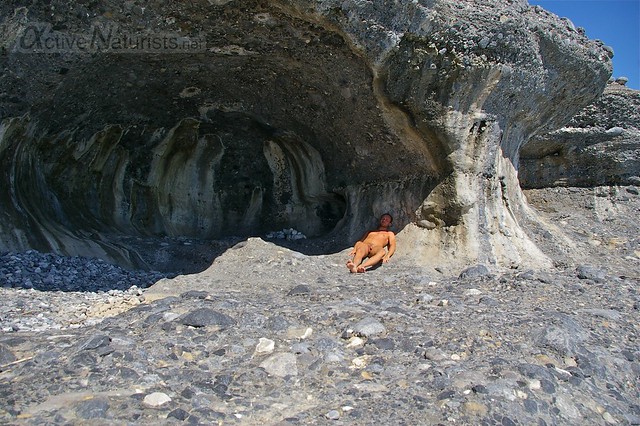 A pretty long stretch of the seashore east of Paleochora has three pebbly beaches known as Anidri or Giliaskari.

Pebbles of the third, easternmost, beach are very small, which make it very convenient to walk on in contrast to big pebbles on other two beaches. In any case, probably thanks to the pebble floor, the water there is incredibly transparent. 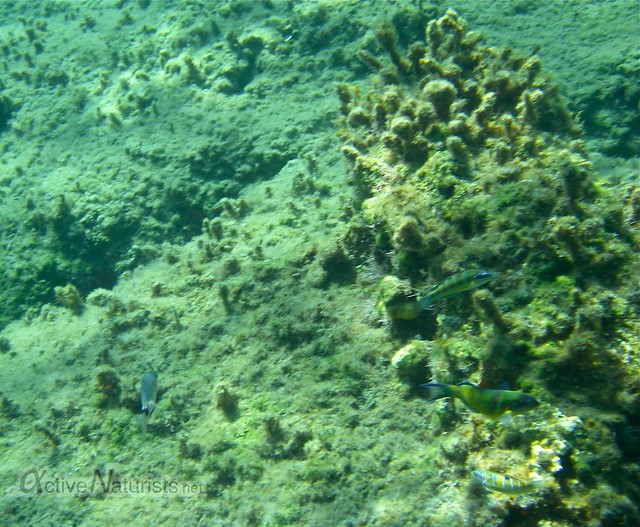 We were there on a very quiet day with almost no wind, so we also played frisbee (there was enough space to not bother anyone with that).

Then we had a few pleasant swims without any waves, so we could easily practice different styles, mostly breaststroke 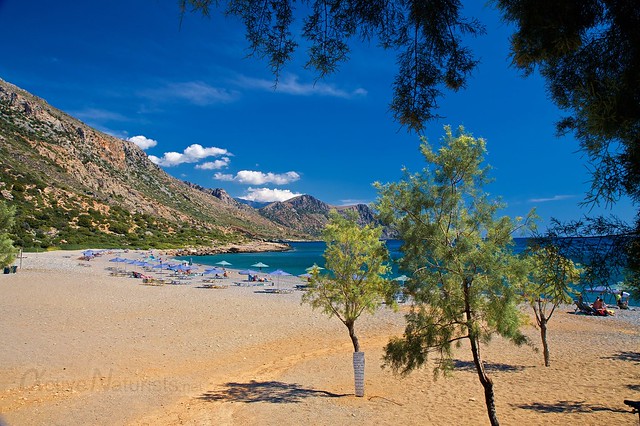 And we really enjoyed those outdoor showers in the sun 😎 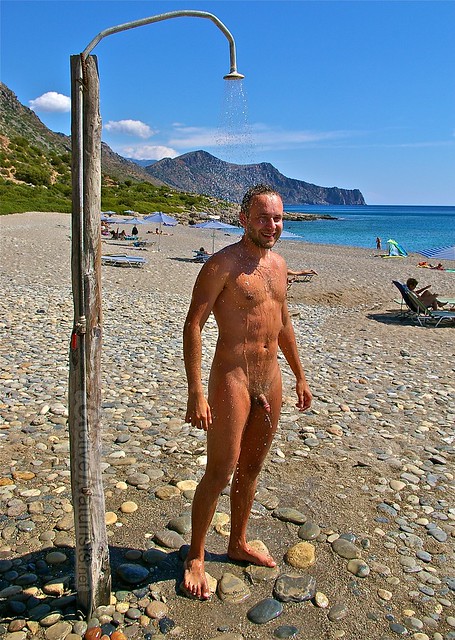 As it’s a pretty long walk back to the town of Paleochora, it’s not a bad idea to wash the salt off you skin.

By the way, this is one of few naturist places in Greece where we’ve seen an “official” warning board about nudism. 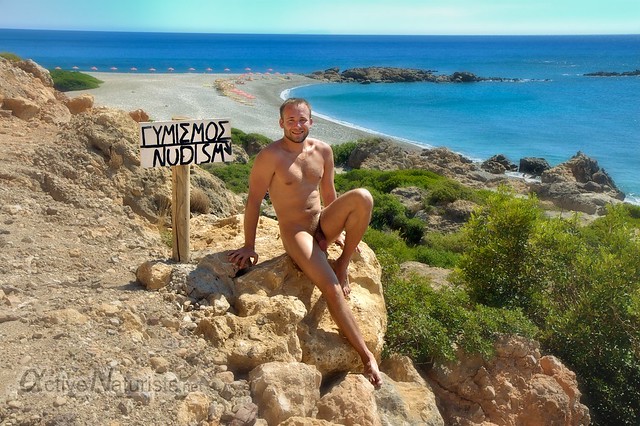 As if you couldn’t guess without it 🙂