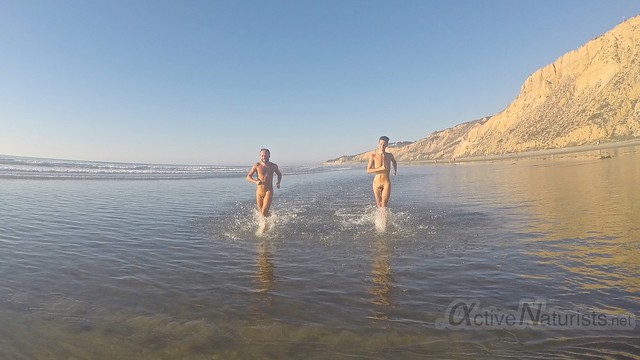 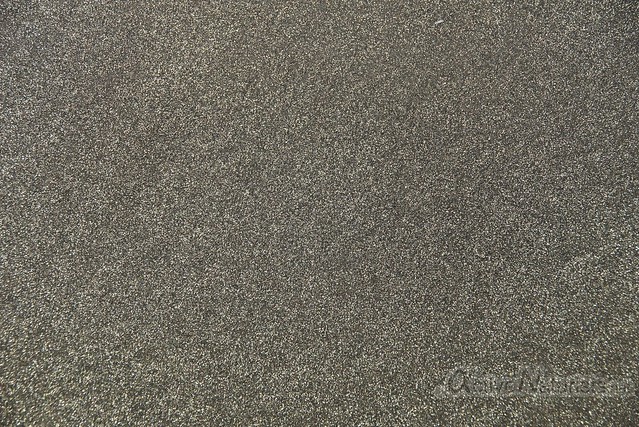 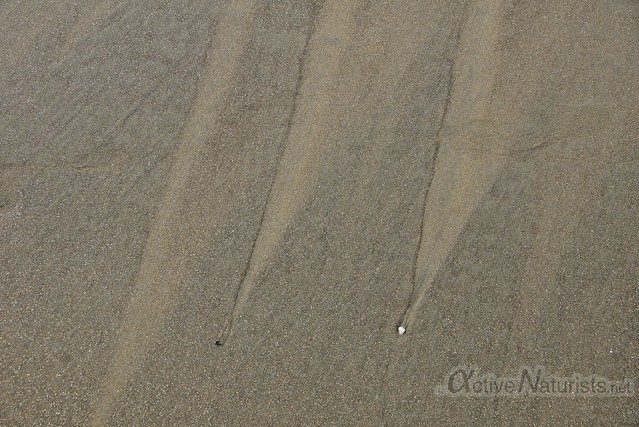 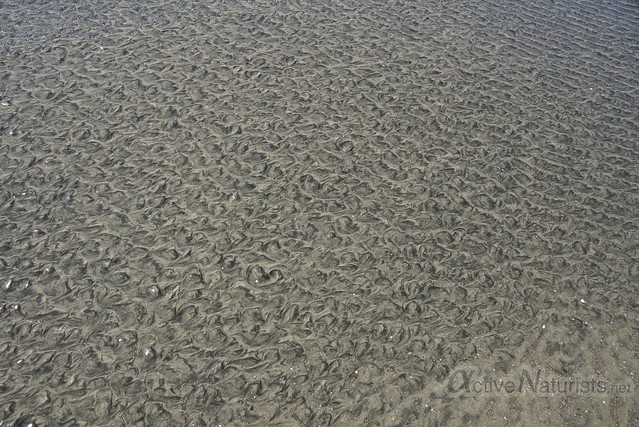 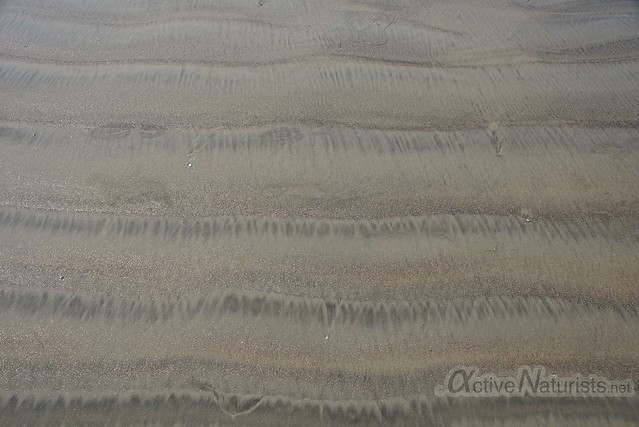 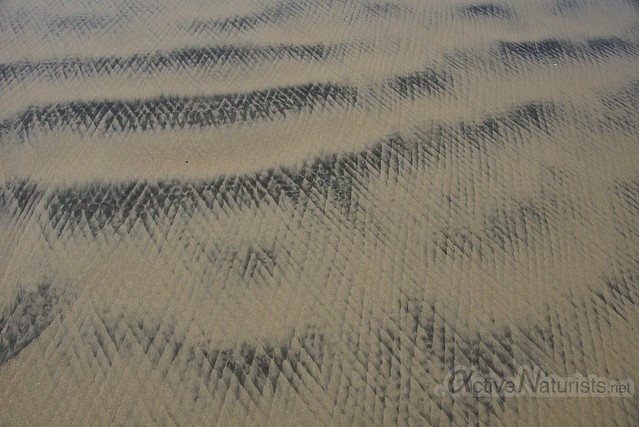 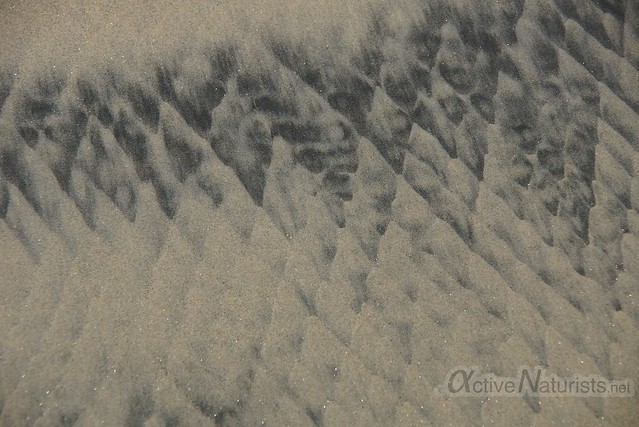 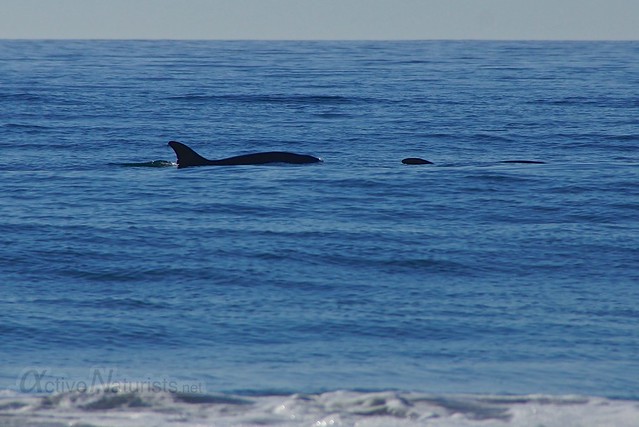 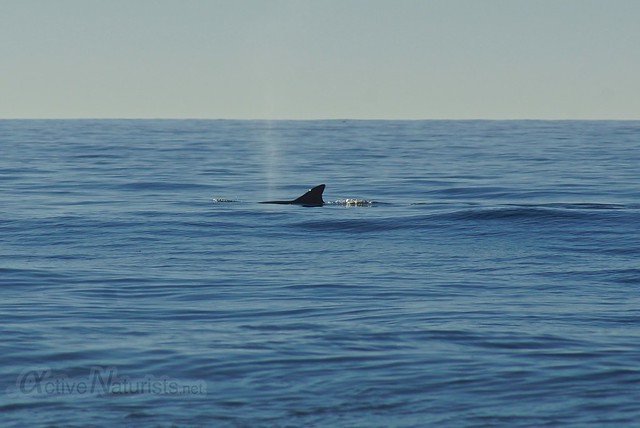 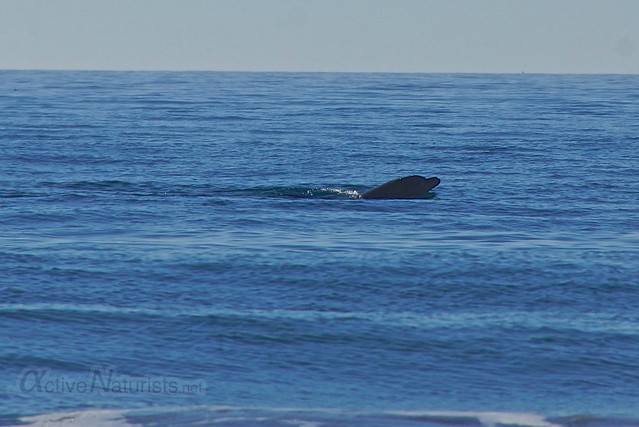 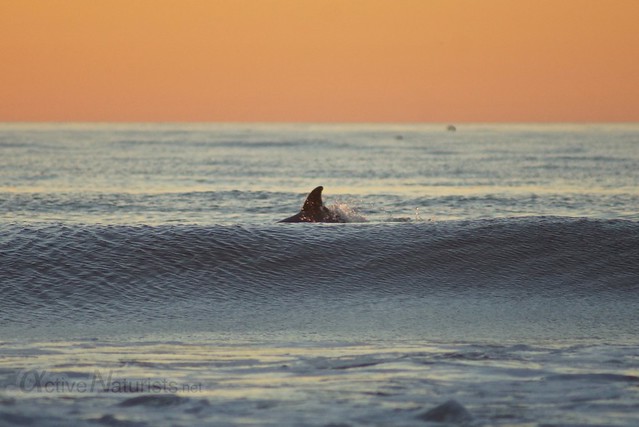 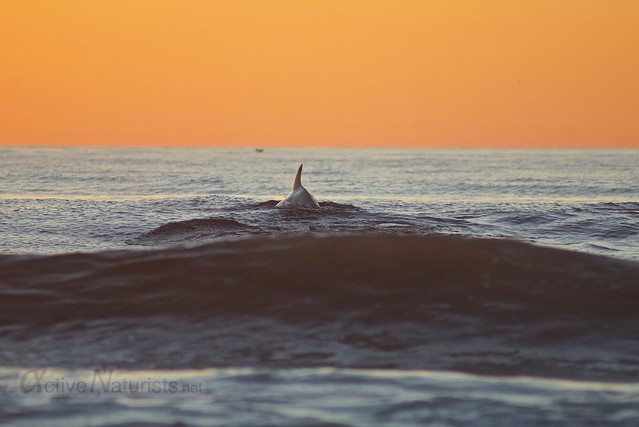 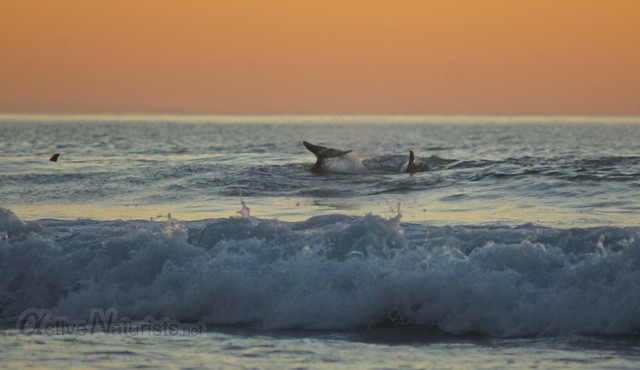 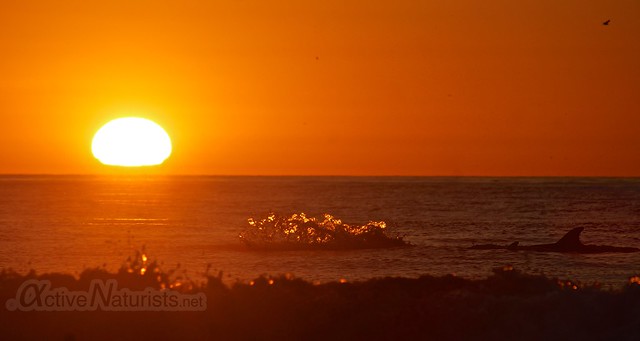 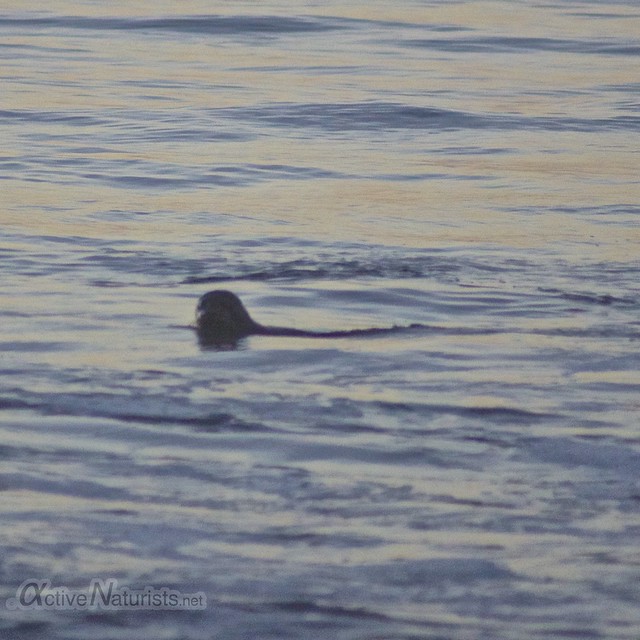 Neither our trip, nor our summer were endless, unfortunately, but what a splendid end we had! (If you haven’t guessed, I’m referring to the surfer movie classics, ‘the Endless Summer.’) So, after biking and hiking through Big Sur, we took the Pacific Surfliner train to San Diego in search of our perfect wave. Our Cali experience wouldn’t have been complete without surfing, and of course, we didn’t want to spoil our naked adventures by having to wear a wetsuit. Luckily, I knew from my previous visit to San Diego that Black’s Beach offered warm water and pretty good waves for surfing. I also read about Naked Surfing Event held at Black’s Beach in 2010, and I contacted ‘Things to Do Nude’ team who organized it. One of them, Dan, got back to me and sounded happy to offer a couple of surfing lessons to fellow naturist enthusiasts. He arranged surfboards for all three of us, and there we were, walking with them down the steep trail to the beach.

That alone was a good warm up exercise, and after we waxed the surfboards and stretched a bit we were ready to go in water.

After chilly waters of northern and central California, this felt really warm; the day was calm and with good waves for the beginner level surfing.

One of my favorite things about surfing is that it teaches you to feel the ocean, to feel which wave is worth a wait and which is good to take.

It was mostly white water surfing for me,

but it was still a lot of fun!

Despite Tam grew up in Australia and Niko had lived in California and Sydney for a few years, I was the only one with surfing experience. However, as Dan promised, Niko managed to ride the wave on the first day.

During the low tide, he was more interested in something else though… as water retreated, it left a some kelp on otherwise perfectly flat sand surface.

Niko got a taste of playing with kelp in the beginning of our trip at Año Nuevo beach, so now he knew what to do and seemed like a pro kelp-poi boy 🙂

On our last day at Black’s Beach, we had the perfect sunset.

It inspired us to take a picture in the aforementioned ‘Endless Summer’ movie poster style,

as well as other photographs.

Jumping over the sun is a beach photo classics, and we had the perfect moment for that.

Jumping out of water above the sun? Even better!

Our efforts weren’t left unnoticed, and a passer-by offered to take a photo of all of us, united, X-shaped against the beautiful sunset background, and it turned out great! Then we found out that creative gentleman worked as an improvisation coach. Obviously, he must be good at it!

That was about it… it was sad that our adventure was coming to an end, but we were all inspired to do something of this kind again!

Here is a special bonus treat from our trip, a time-lapse video with our beach fun memories.

In the mid-November, I was lucky to go with my new colleagues for the biggest conference in my field, the annual meeting of the Society for Neuroscience, and that time it was held in the sunny San Diego. Of course, it wouldn’t have been me, if I hadn’t planned to visit a nudist beach there, especially such a famous one as Black’s Beach. And I was double lucky that on the warmest day during my stay, when it was over 25ºC, the program seemed the least interesting so I skipped most of the day and headed to the beach (see the map for exact location).

As soon as I reached, it was pretty clear why this beach is so famous: it is, obviously, one of the biggest clothing-optional beaches and the view from the cliffs is stunning! It reminded me of the beaches of Meco in Portugal and Ga’ash in Israel.

I was surprised that on such an unusually warm day for November it was relatively empty, although it was Sunday, but I noticed some naked sunbathers immediately.

There are several trails leading down, and apparently I chose not the easiest one, but it was fun.

And I saw some lizards on the way down, apparently the enjoyed the sun too.

Soon I was walking on the soft beach sand, and look how the waves create a beautiful ornament of black and gold.

Then I saw that besides sunbathers there were surfers too!
But not naked

Well, the water wasn’t too warm… But actually, first time I heard of Black’s Beach was because of the Nude Surfing Event. (check this link for more info)
Here is a video of one of the surfers.
Now, I’ve found that they actually arrange naked surfing lessons from July till September! I want to do that!!!
… but coming back to my calm day at the Black’s Beach, I was looking for a nice spot to lie down. I stayed near bushes and soon found that I had some neighbors: a rabbit (could not manage to take a photo of it) and a California ground squirrel that was quite tame and obviously was attracted to my nuts. (I mean I had some almonds with me 🙂

But then I got to know a bit more communicative neighbor, local visitor Alex. We chatted for a while, and it was him who disillusioned me by saying that such a hot day was not common that time of the year even in Southern California… But I still thought to myself that I might have made a mistake not applying for job at Salk Institute which is located practically on top of Black’s Beach, hehe. The idea that one can walk to such a beautiful beach for a lunch break sounds tantalizing! I did go to a lake for lunch breaks in my first year in Berlin until our lab moved, but even then my work was not that close to a naturist retreat like here.

Later in the afternoon I went jogging all along the beach and this gave me the real impression of how huge the beach is! But, apparently not all beach is officially a clothing optional area. When I ran in the northern direction one elderly man waived to me and told that I was way beyond the nude-friendly area and might get fined! If I understood correctly, the clothing optional part ends to the north of these rocks. But there was no sign. In any case, I didn’t feel bad, as only 2 or 3 people saw me in that section of the beach and there were either coming from or heading to the clothing-optional part, so I doubt they would be shocked by seeing a naked jogger.
Other people that I met gave me much more pleasant news. I saw one guy practicing some capoeira moves, but unfortunately he had to leave soon. I still haven’t mentioned that I did swim there too. The water was a little chilly, but I could stand it for 20-30min, amongst few others. And then, the only neighbor of mine, who went for long swims too, was coming from the sea almost crying. Don’t worry, he wasn’t bitten by a shark, those were tears of happiness as he saw a school of dolphins right next to him! He said it was one the most beautiful moments in his life, and I was very disappointed at myself that I left the ocean just about 10min earlier… I have swum with dolphins once, but that was in murky waters of Rio Negro in the Amazon basin so I couldn’t really see them underwater…
And when I was going back at sunset I saw a group of people playing volleyball, in the buff of course. This beach certainly seems to be perfect for many kinds of naturist activities 🙂

Before I was going to wear my clothes, I saw a threatening warning ‘Unstable Cliffs. Stay Back’ 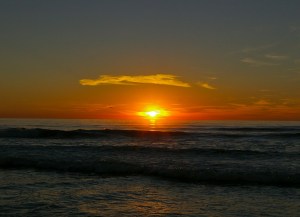 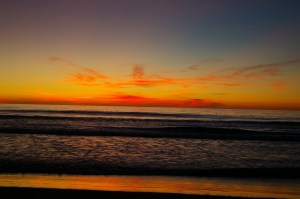 One of the next (colder) days, I went there again with my colleagues for a short hike in Torrey Pines Park. When we went down to the beach I took some more photos, like this one with giant algae brought by waves on the shore.

And these are sandpipers; the smaller ones always run somewhat clumsily trying to escape the waves, while the bigger one stay calm.

And once in a while there were flocks of (probably) pelicans…

So overall, Black’s Beach seems to be perfect for nature lovers and active beach-goers. I hope to go there again, perhaps for a class of naked surfing!