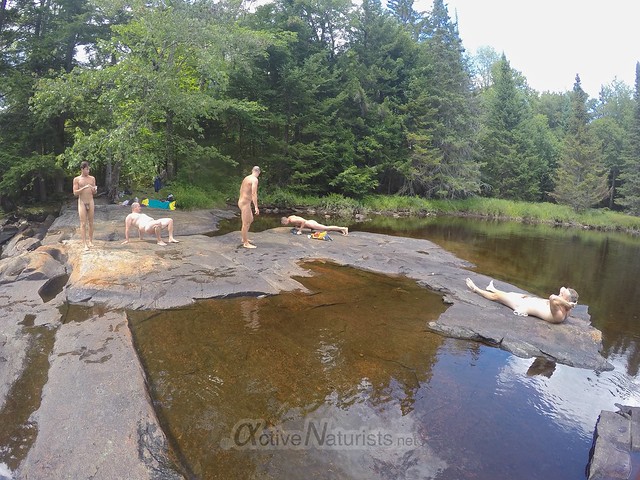 The Adirondacks are great for hiking and kayaking, but even relaxing by a creek may turn out very special there, as it happened to us at the so-called Potholers on the East Canada Creek. One of the reasons was that it was secluded enough to have the spot to ourselves most of the time, so we stayed comfortably naked. 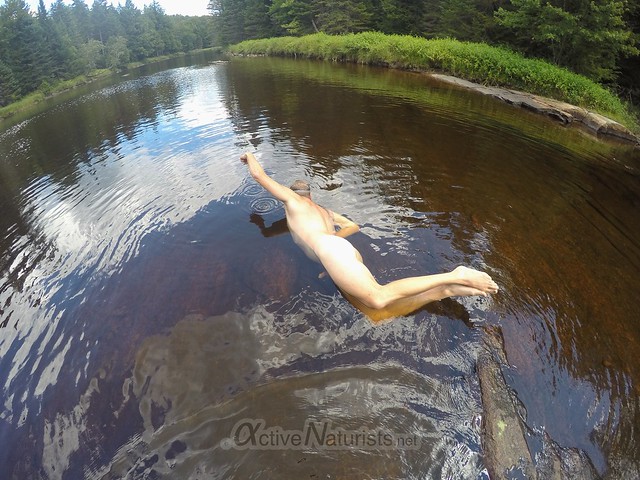 Upstream from where we stayed, the creek was deep enough for swimming. 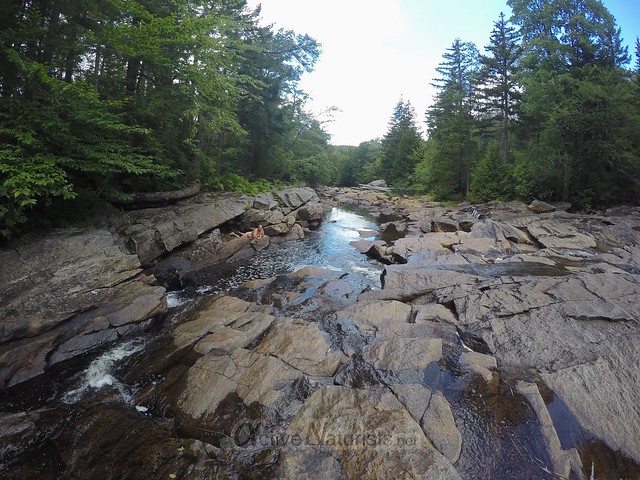 Downstream were the rocks, flat and comfortable – you can’t ask for a better way of relaxation than chilling outdoors with the sound of running water. 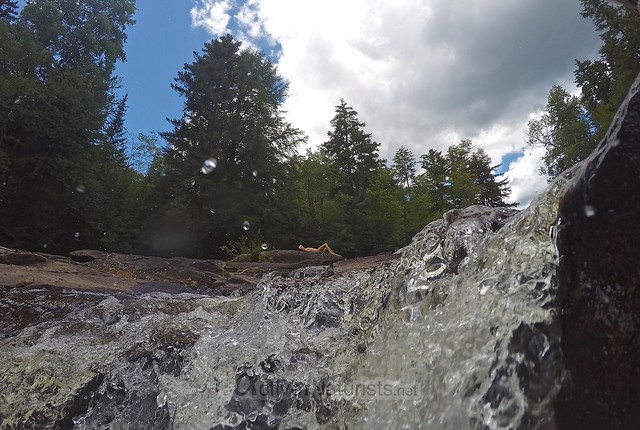 Well, maybe if you get in that running water for a shoulder massage! 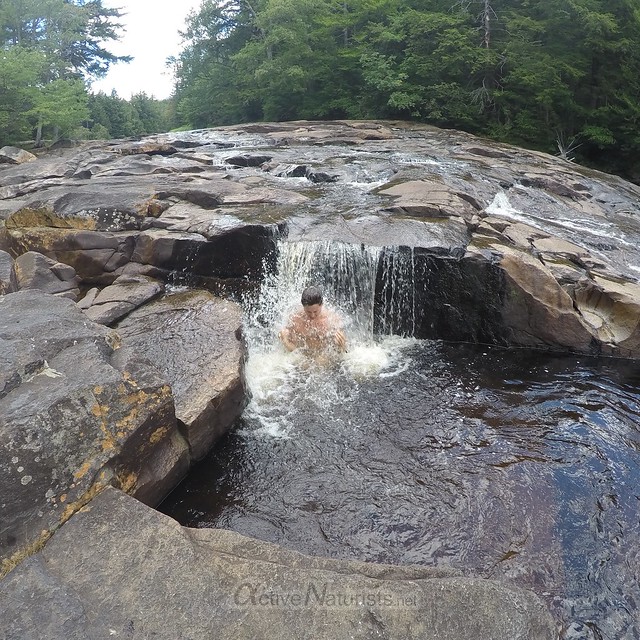 Some of the “potholes” create perfect natural bathtubs, where you could sit with the water flowing over your shoulders and massaging you! And the temperature of the water was (in July) just perfect – refreshing but not chilling. 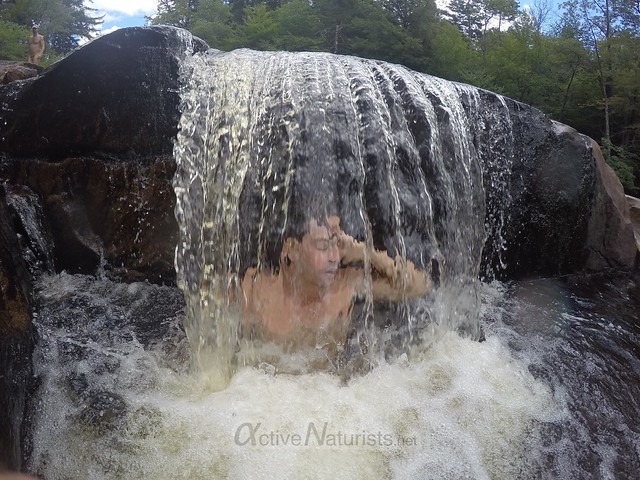 It was also nice to go behind that water wall and close yourself from the outer world for a moment. 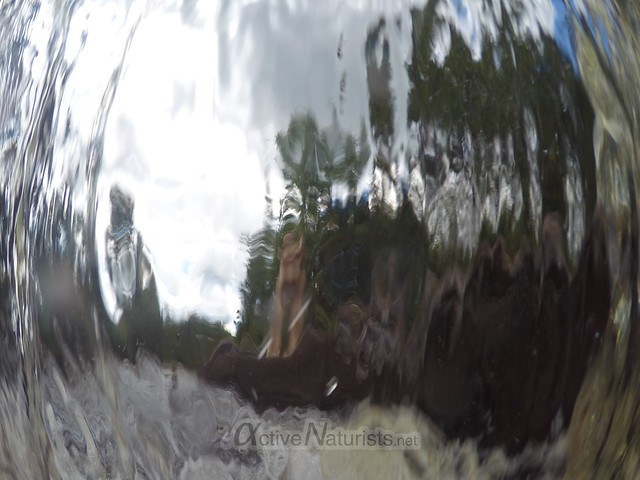 Of course you could still see through, even though quite distorted. But there were some very peculiar things to observe indeed!

Check out this video:

We are pretty sure this behavior has never been seen (or at least recorded) before, and we still don’t know its meaning. What is it?

On that trip, we also visited the G-lake. It was great for swimming, but while bushwalking around it, one of us got stung by wild bees! 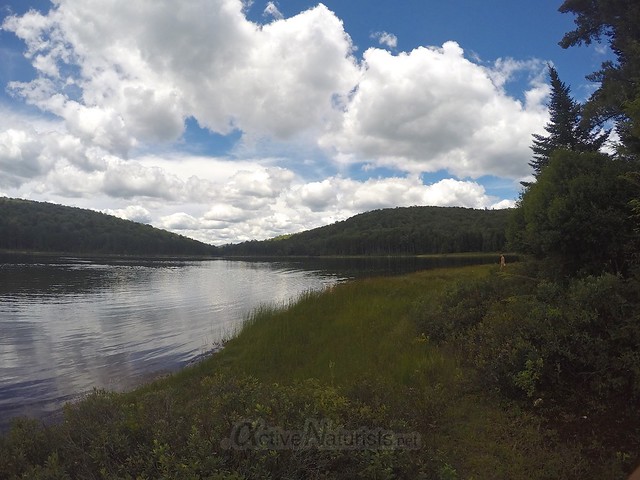 And not to make you completely against the idea of visiting this lake, we also saw a leech there. But it was actually a pretty sight, because it swam gracefully at the surface and was brightly colored – green with orange spots; so I actually regretted I didn’t have my camera at that moment. Well, but at least we were lucky to record the elusive Homo tritonii at the Potholers!

Besides hiking, Adirondack Park offers great kayaking too. Teddy, like many locals, has his own kayaks so we went to explore the West Branch of Sacandaga River and Good Luck Lake – with that name, you needn’t think twice about checking it out, and it turned out beautiful too! The banks of the canal that lead to Good Luck lake were full of blooming aquatic plants.

The views from the Good Luck lake made us feel lucky!

And we were indeed lucky to see a family of elusive loons. Their calls echoed because of the hills surrounding the lake, it sounded quite spooky.

We stayed at the lake till sunset, and next day returned to explore the Sacandaga River more.

That part of Sacandaga River is just perfect for laid-back kayaking: the current is not too strong, and the width allows easy maneuvering and yet being close enough to the banks not to miss any wildlife, that you’re likely to see there.

However, there are some places that hard to go through because of fallen trees.

Still, we managed to get through without too much hassle.

The bottom was mostly sandy, but in some places there were algae that looked like smooth golden-green hair.

Going further up from Good Luck lake, we had more and more places that were too shallow to paddle easily,

so the best way to continue was lifting up and crawling with the arms while still seated in kayak.

But after the bridge, it became too rocky and shallow to continue in kayaks. We walked for a bit, but there was no sign it was going to improve any time soon.

I think I forgot to mention, that ironically, Teddy’s dog was the only one clothed 😀 Teddy just didn’t want him to get lost.

It was nice to make a pause from rowing and get some blackberries. After that, we headed back downstream, and stopped at a little sandy beach. There was a fellow kayaker passing by, he seemed cool with us being naked but wondered why we didn’t have any ladies with us. We suggested him to work on that next time 😀

Down another bridge, the flow was even calmer. We tried to go through a small channel, but it was blocked by a beaver dam.

Well, it turned out that main branch was dammed by beavers too, just a few feet up!

But it wasn’t too difficult to get over it and was actually fun!

We heard some big animals running through the bushes – could be deer or bears – but the only wildlife we were lucky to see that time was a blue heron.

It seemed to be pretty busy fishing and didn’t pay much attention to us.

Given that Adirondack Park is ‘the largest state-level protected area in the contiguous United States’, there is obviously more to explore. Looking forward to the next trip to Adirondacks!

Sorry for having been quiet for the entire month of November, but hopefully we’ll be more active at blogging this month. Luckily, there’s never a shortage of what to post, just the lack of time. After writing about the hike in Mohonk Preserve in New York, I thought I should add a couple more stories from Upstate this summer. My friend Miguel, an avid naturist himself, connected me with his buddy Teddy, who seemed to know the southern portion of the Adirondack Park well. So, after a couple of weeks planning, I was on the train from [former] New Amsterdam to Amsterdam, NY.

Teddy brought me to his favorite hiking trail along the Tenant Creek.

There are three waterfalls, but most people don’t go beyond the first one. We had the third waterfall all to ourselves!

The hike took us about an hour, but as we started pretty late, we had just an hour of sunlight left to set up a camp and go skinny-dipping.

It was easy to find a spot for out tent, but the place is certainly not mean for a lot of campers, so we were lucky to not have any neighbors. The sound of the waterfall was a perfect accompaniment for otherwise quiet night!

Next day, we went to explore the forest around, and it was so worth it. Butterflies and flowers greeted us, and we had some hand-picked blackberries for breakfast :p

… and then I saw a coyote! He definitely saw me too, and even let me to take a picture of him,

though by the time I focused well, he was scared by Teddy getting out of blackberry bushes and ran away.

But even so, it was a big luck to have seen a coyote in New York state!

After walking in the sun, it was nice to come back to our camp and enjoy skinny-dipping.

In the waterfall, there was even a deepening that looked like a perfect bathtub, but the water was too cold to really sit there for a while.

We could swim in the pond below, however.

On the way back, we saw these amazing colorful mushrooms.

Near the first waterfall, Teddy knew a tree that grew right on top of the rock with its roots twisting down. It was almost the point to put our clothes on, because there might be more people coming, but we couldn’t resist snapping a couple of photos.

What a great place to enjoy the beauty of the forest and meditate.

This toad seemed to do the same, and lucky him, nobody would make a fuss for him being naked!