Continuation of Nudity as a social norm – part I

Sport activities have been commonly done naked in many cultures. One of the first depictions of an athletic competition is the famous Minoan fresco of a bull leaping, which was done by both men (usually depicted tanned) and women (pale). This must have been a very dangerous tradition, and although it was typical on Crete in Minoan culture, where the Greek, and thus Western, civilization began, it was not preserved in its descendants.

However, there is a similar tradition in an Ethiopian tribe called Hamer. There, boys run over the backs of several bulls in order to prove their manliness. Sports in Ancient Greece became a necessary part of education, as gymnasiums incorporated athletic training with studies in philosophy and arts; and as we’ve mentioned a few times on this website, the term ‘gymnasium’ comes from a Greek word meaning ‘to exercise nude’

Here is the link to an excellent site about ancient Greek sport. Sport was one of the essential traditions that united those otherwise politically very different city-states and colonies, as the representatives from all parts of the Hellenic world gathered for four Panhellenic athletic competitions (taken from Wikipedia):

The Games took place in a four-year cycle known as the Olympiad, which was one of the ways the Greeks measured time. The main events at each of the games were chariot racing, 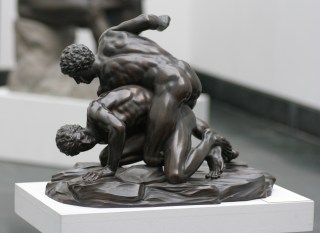 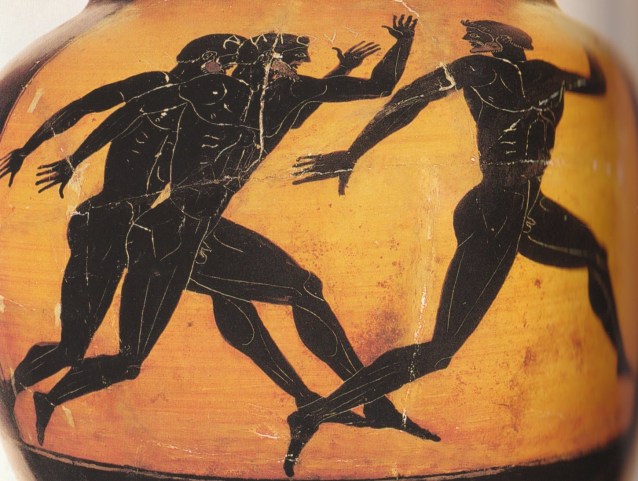 and various other foot races,

including race in armor (but still nude) 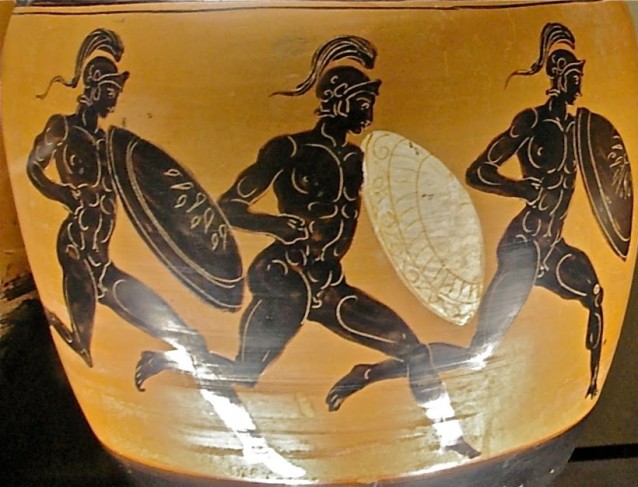 and the pentathlon (made up of wrestling, stadion, long jump,

Except for the chariot race, all the events were performed in the nude. Though, there are some depictions of nude chariot racers as well.

The athletes competed naked, not only as the weather was appropriate, but also as the festival was meant to celebrate, in part, the achievements of the human body. Olive oil was occasionally used by the competitors, not only to keep skin smooth, but also to provide an appealing look for the participants. 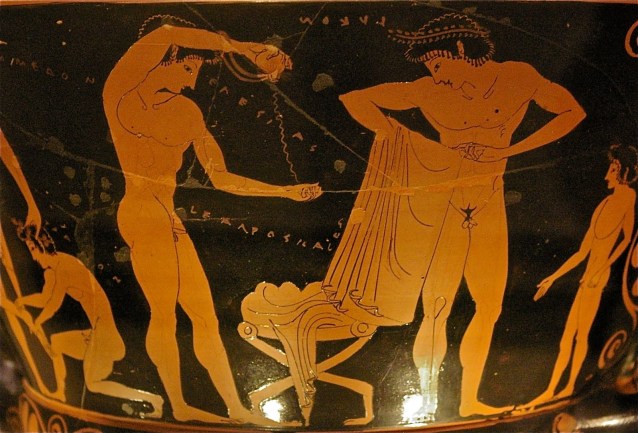 For combat sports, some kind of powder was also applied to allow better grabbing.

Also, you can see that often sportsmen training various disciplines are depicted together, maybe to enhance communication between different professionals – like for these athletes shown during a chitchat between trainings.

And is it just fooling around, or the winner is carried by the defeated in a wrestling match? (like in some Nuba wrestling traditions, see below)

Although most of the figures show perfectly athletic men, on the vase painting below in the middle we can see a chubby lad who is going to train boxing while two others, jumping and javelin-throw.

and boxing movements (or simply to cheer up, like in modern gyms?)

And overall, ancient greeks saw music, athletics and science as interrelated and necessary compounds for a complete education in gymnasium (the word itself coming from gymnos (γυμνός), meaning “naked”).

There is a funny video on the official Olympic Games web site, explaining that nudity became a norm on ancient Olympics, because one of the athletes lost his garments during the race and won it. There are many convoluted theories, but I have never seen the most obvious: isn’t it just more convenient? 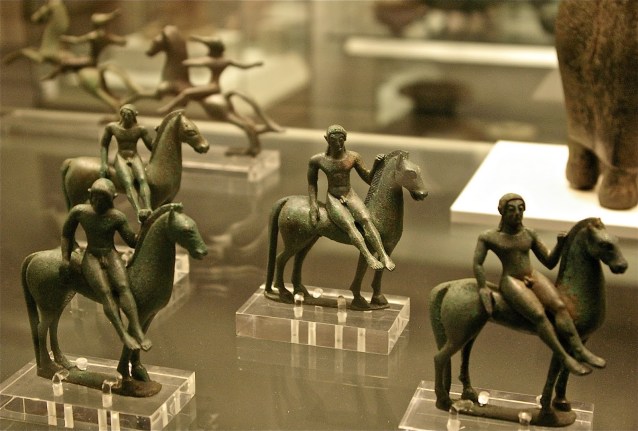 But often horse riders had a mantle.

(for an esthetic effect?)

And some coins and sculptures suggest that even dolphin riding was not foreign to ancient Greeks.

Or is it just an echo of the myth Arion? He was an unparalleled musician and poet praised by Apollo himself. Once Arion was kidnapped by pirates but escaped from their ship with help of dolphins (they were also enchanted by his music).

There were also some ball games, but the rules are mostly lost. Some are described here. Surprisingly, depictions of swimming are relatively rare in ancient Greek art, although now it is probably the first sport you would think of to suggest for a naturist competition. But already ancient egyptians developed a style similar to the modern crawl.

Diving could be another water sport done by Greeks.

This is an image of a woman probably performing a front crawl (while others are dancing?), 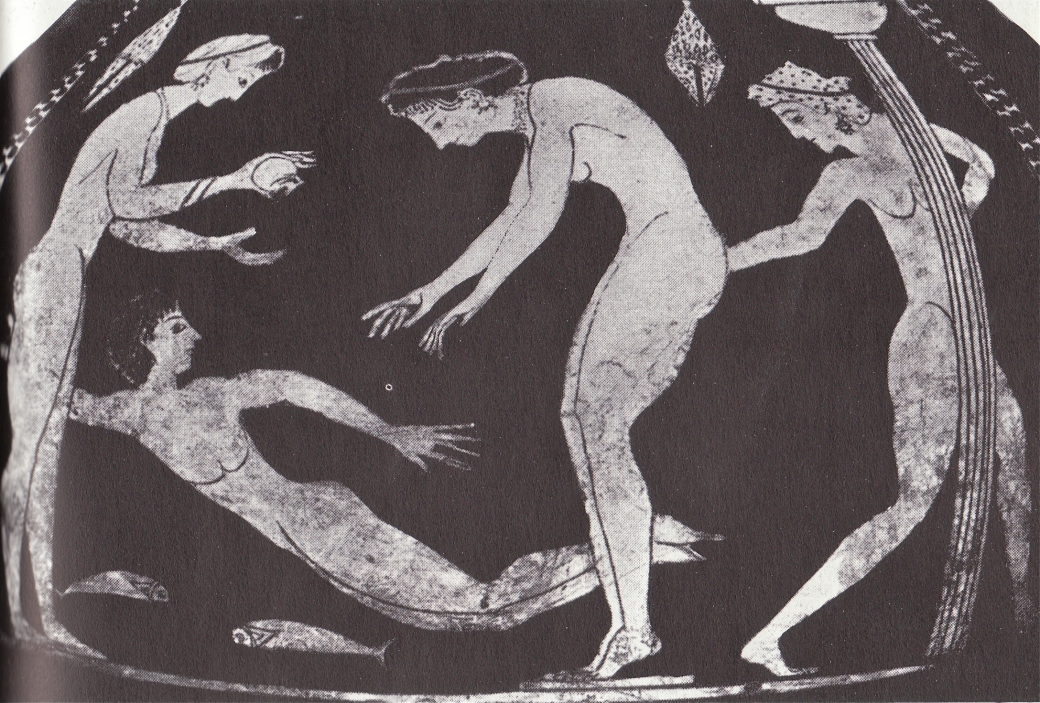 but otherwise depictions of ancient Greek women in sports are relatively scarce.

Apparently, there were female acrobats.

Besides athletic sports, there were other games, like this one resembling marbles.

With the establishment of Christianity as a state religion on the the territory of Roman Empire, the Ancient Olympics were considered pagan and the last games were held in 393AD, marking the end of the ancient history.

The tradition of naked sports persists till now in some African and Amazon tribes, however.

Massai, for example, make competitions for the highest jump. This photo above looks more like a warm up, but here is a good jump: The natives Hawaiian who were one of the first nations to practice waive-surfing in modern history did it naked. (some sources say that surfing was probably invented in Peru about 3000 years ago!) When Mark Twain visited Hawaii in 1866 he wrote: “In one place we came upon a large company of naked natives, of both sexes and all ages, amusing themselves with the national pastime of surfbathing.” 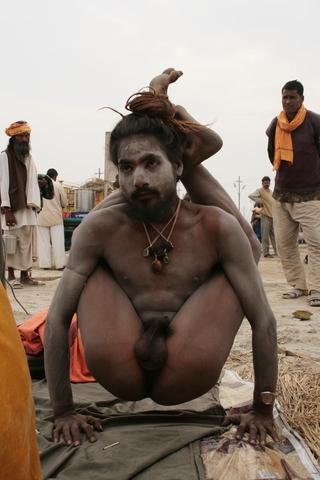 Martial arts seem to be the most widespread and common sport in many cultures, and they are usually performed naked, like this fight competition held by xingu tribe in Amazon. 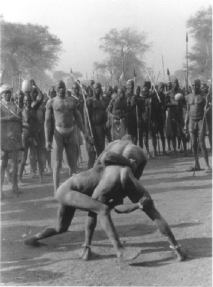 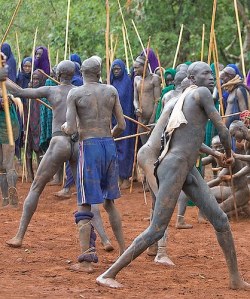 Different villages have different rules, some are very cautious and never end up cruelly, while others have practically no restrictions and may be easily fatal (like the ancient Greek pankration). 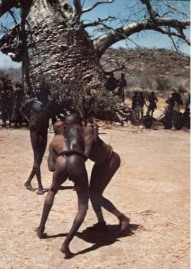 Sometimes, similar to the ancient Greeks, East African fighters cover their bodies with oils or ashes.

According to traditions in some tribes, the defeated carries the winner on his shoulders after the competition.

And then it all ends in peace 🙂 … and traditions are passed to the next generation.

Of the modern widely popular sports, capoeira seem to have inherited many features of the Nuba wrestling and also, just like for ancient Greeks, musical accompaniment is essential for capoeiristas. It is good to see that on some Brazilian beaches capoeira is practiced naked too.

Hopefully, our modern society will eventually accept the healthy attitude towards body that the primary European culture once had and some tropical societies have maintained till now.