Our blog has seen a slow start this year, but at least I’ve decided to kick off 2013 with a long and colourful post… about Harriman State Park again! When I wrote about it last time, you’d think we wouldn’t collect so many new stories and photos for the new post. I find this place really amazing in terms of rich wildlife, especially given proximity to the megapolis of New York. So, here is the summary of the past summer, so needed a recollection of nice warm memories on these cold days (in this part of the world)…

While winding on the hills of Harriman park, make sure to get a chance to stop by points of view, as you’re likely to see Manhattan skyline,

which, depending on how you look at it, may comfort you or may make you feel somewhat confused as to how these two worlds can coexist so close to each other.

Otherwise, it’s going to be a pretty impressive sea of green around you.

But don’t forget to look down either, for there may be… something tasty.

Last summer, we had a very fruitful (quite literally) blueberry season. Sometimes we couldn’t help but stopped to get a mouthful of blueberries, which hindered hikes quite a bit. 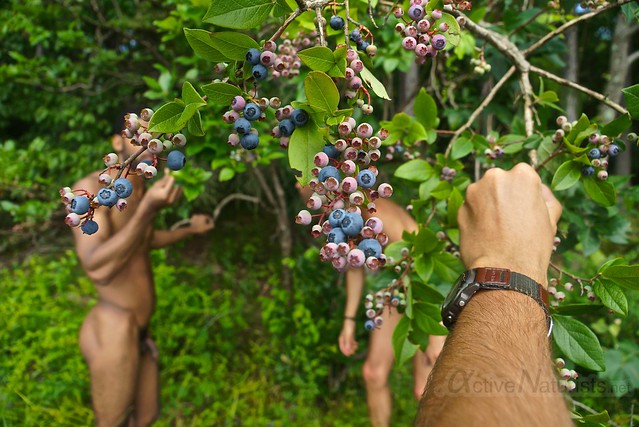 Again, this is a very pleasant memory at the time of the year when blueberries sold in New York come from Chile… There are different species of blueberries in the area, with the most notable being the northern highbush blueberry, which mostly grows by the lakes.

Lowbush varieties grow throughout the forest. One of them was tastes quite differently from those you get on the market: it is sweeter but also much dryer and its seeds are more noticeable; the berries are almost black.

But the best way to pick blueberries that I can think of is probably when you stand in shallow water and have a row of highbush blueberries in front of you (like here at the Pine Meadow Lake).

You might need to share the most fertile bushes though 🙂 Having known only European varieties of blueberries, I was really impressed that here they can grow so tall.

Well, but not as tall so that you could climb them. But some trees looked quite inviting…

to climb and pose on them.

Well, I was able to climb this giant with a smooth and straight trunk and stand on it in a triumphant pose, only because it had fallen.

But this one had some curves that was too easy to grab and rest on.

Despite constant stopping for enjoying the views, picking blueberries and climbing trees, we covered quite large distances on our walks. We really took it seriously to explore hiking routes of Harriman Park. Unlike in the previous 2 summers, when we usually came with MTA trains to Peekskill or Garrison and then travelled within the park by bikes, last summer we came to the borders of the park by car or NJ transit trains (e.g., to Suffern or Tuxedo), and then explored the park by foot.

It was a good idea to get maps from NY-NJ Trail Conference. The trail system is extensive, but most of the trails are clearly marked and it is pretty easy to follow the map. It’s worth noting that there is no cell service throughout most of the park, don’t rely on mobile maps.

So, after staring at the map for a couple of minutes, most of the time, we knew where we were heading to. There is a colour scheme for the trails, so look for colour signs on trees and rocks. I think there might be another, more natural way of labelling the trails – by planting mushrooms of different colours. This silly thought appeared in my head when I saw a yellow mushroom growing on yellow trail.

Last summer was also a good season for mushrooms and they came in all shades.

Not all of them were that bright, of course, but overall, we wished we knew about local mushrooms. I bet we missed some tasty ones.

As to the trails themselves, they are pretty diverse too. You can have some nice flat grassy trails,

and flat rocks – usually along the springs

– have I mentioned the views?

Some trails are pretty wide and could even fit a car, because they are actually descendants  of roads that served the mines in this area decades ago.

In some places. the trail appears almost man-made, as it goes on a smooth flat rock surrounded by grass. I appreciated those parts especially when I was walking barefoot, which I’ve been practicing actively for 2 summers now.

And speaking of rocks, there are some quite spectacular ones. This one looks as if fallen from out of space with such force that it was split in half.

This one reminded me a fish head.

Others might not be that eye-catching but were nice to rest on.

If it’s too small to lie on it, it may be good enough for planking. I never considered the trend of planking (even naked one) particularly entertaining, but somehow I got inspired for it seeing all those flat rocks.

Later on, we the sky turned into a bright palette of red colours.

But if there is no lake nearby, you’re like to stumble upon one of numerous springs.

Many of them are deep enough for a [skinny] dip.

By the way, our affection of swimming didn’t go unnoticed. Once, when my friend Sasha and I were about to leave the Pine Meadow Lake, two guys from India approached us and started a conversation. You might think that they were curious to see two naked guys in the woods – and indeed they were 🙂 – but one of them didn’t know how to swim and he asked us to teach him.

Maybe I look professional in my goggles, or maybe they just saw that I was away in water for half an hour. In any case, I am glad he got inspired and I guess we’ll continue his lessons next summer.

Another highlight was discover of a shelter.

Later, we found on the map that there were a few of them in the park, which is good to know in case of unexpected bad weather.

Besides aforementioned blueberry bushes, it attracted us with its beautiful views, as well as with minuscule islets where one could pose like a stork,

or imagine yourself a Gulliver.

And of course we had many opportunities to observe and photograph wildlife again.

However, last summer, it wasn’t the mammals that caught my attention most of the time.

Dragonflies seemed to queue up to get photographed,

sometimes even two at once.

This is some kind of blue wasp.

And this is a parasitic wasp that was looking for insects in the bark to lay her eggs – I noticed it while climbing that curvy tree that I mentioned above.

Butterflies were abundant too. It was interesting to see tiger swallowtail

next to its relative spicebush swallowtail with almost inverted colours.

Although butterflies are the easiest to spot among insects, it’s not that easy to take a decent photo of them due to their unpredictable movement pattern. This grasshopper turned out to be a much better model!

It jumped on my shoulder and waited patiently while we were photographing. Too bad the light was low.

Another great poser was this northern water snake.

Once it went in water, it revealed its bright skin.

It was circling in the same spot and seemed to be looking for something without paying too much attention to us.

Soon we saw what it was up for.

There was a pretty big American bull frog hiding quietly under grass.

Then slowly it moved away. On another hike, we witnessed a less lucky situation (for the frog). I heard a squeaking sound from under a rock and saw a snake swallowing a frog (well, lucky snake then).

OK, enough of this wildlife drama for the start of new year! I just wanted to say again that  were happy to explore outdoors next to New York City, happy to see that the park seem to be in a healthy condition (except for some spots where people leave their trash, as I mentioned in the previous post). Lichens covering rocks and trees are a good indicator or clean air.

I’m so looking forward to the summer and exploring Harriman park further!