So, two weeks ago it happened after all! I was really worried about how the NYC edition of the World Naked Bike Ride would go, as last year, more-than-necessary police presence scared the participants, so no one even dared to get naked. This year was quite an improvement in this respect, even though only several tens of people of showed up. For whatever reason, there was no intervention whatsoever, and the ride went totally smooth.

It started with some speeches from the organizers with the iconic Manhattan skyline on the background.

I couldn’t believe it, but right after we took off, one guy disrobed totally. Obviously, I couldn’t help doing the same. He turned out to be from Portland, where WNBR attracts thousands and most of participants are naked, so he rightfully pointed out that was actually why it was called ‘naked bike ride’.

Well, yeah, maybe in Portland and most of the Western world, but I had to explain that NYC was somewhat difficult. But there I was, riding naked through the streets of New York.

and even more people followed.

After Williamsburg, we headed to East Village,

and Lower East Side. We weren’t as many as we’d like to, but we still filled the road for about half of the block. And we definitely attracted a lot of attention from the crowd!

When we stopped at the crossings,

or even while riding, we were asked by pedestrians and drivers alike what it was all about. I tried to explain in two words, but hopefully many did their search online afterwards so that awareness about cycling in the city would spread.

One of the important points was stopping by BP gas station, still symbolic as one of the major pollutants after the spill in Mexican Gulf.

Unfortunately, we didn’t go through main sights of New York City, like most of the naked rides do in other cities, but we did encounter some sightseeing buses, and I bet it the highlight of their tour.

Well, I hope next year we’ll cover more areas of Manhattan – to get more people involved, interested, alerted – but also for the fun of it. Isn’t it just awesome to have a group bike tour through NYC, and on tope of it in the buff?

Before heading out to the after party, we had one last naked stop in the park. I wish we could have a party in the park like it was in Madrid, but I feel that would be too risky in NYC.

PS thanks to the reporter from Village Voice for nice coverage (and yes, he was fully covered). I’ve used some of his photos.

Finally, the New York City part of the World Naked Bike Ride is set up for riding, and even in two parts!

It will take place on the 9th of June, next Saturday, together with most of the Northern Hemisphere cities participating in WNBR. As I wrote earlier, we do need this event in New York, there is a lot of room for improvement in terms of body freedom and biking, and with claims of being the capital of the world, this city should set an example in these issues.

Please take part if you can, and spread the word! Refer to the official WNBR NYC wiki page and WNBR NYC press release for details. 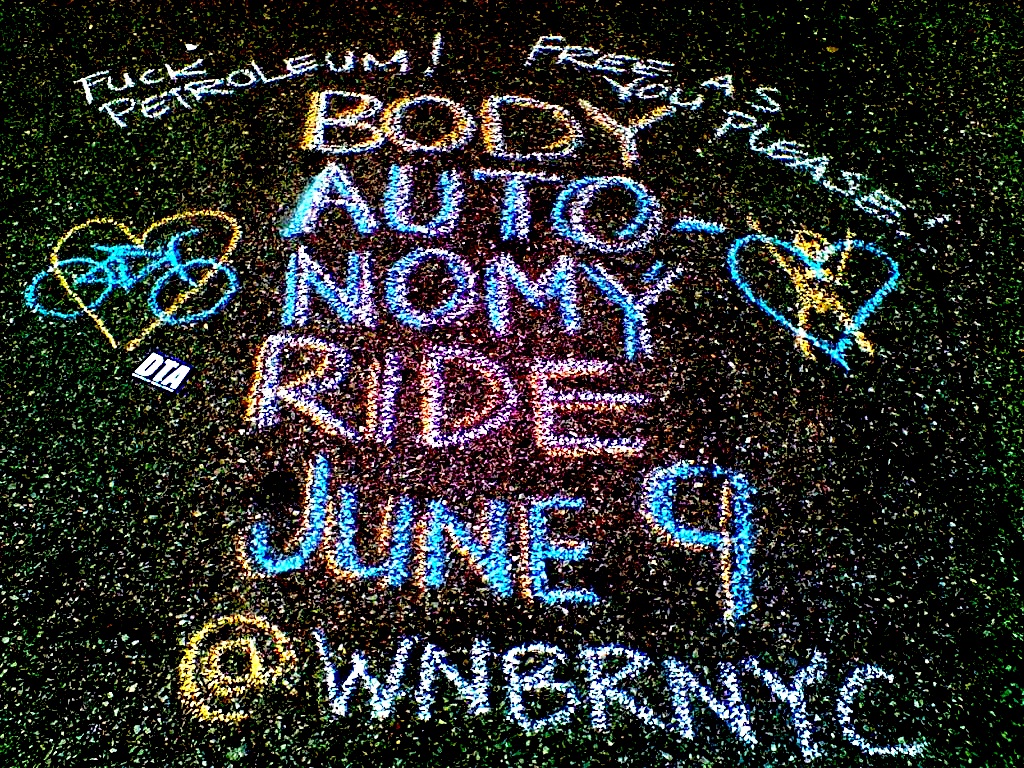 World Naked Bike Ride is a worldwide demonstration promoting cycling as an urban mode of transportation, as well as body acceptance. Riding naked is symbolic and effective way to draw attention to vulnerability of people against the traffic and pollution, and it also shows that being nude is not lewd. That is why we need WNBR so much in New York City, as well as probably any other big city, perhaps with the exception of Berlin, where you can ride your bike wherever you like, and you can be naked even in Tiergarten, Berlin’s equivalent of Central Park. There has a been a stunning improvement in making New York a bike-friendly city, but still, there is no cross-town bike lane in the entire Midtown Manhattan from the 20th to the 90th street, for example. Also, even though it is legal for women to be top-free in public in New York, Felicity from Young Naturists America was arrested for walking topless during an art performance on Wall Street!

This video that went viral a while ago, pretty much summarizes just some of the daily troubles of cyclists in New York City.

It gained more momentum as a protest against oil-dependence – it was a year of bp oil spill – and the naked demonstrators did not miss a chance to stop by a bp gas station.

But last year, we did have some issues. First, we had unusually cold and foggy weather on the day of the ride, even though during the week the weather was fine. So the ride was postponed and we only had a after-party-turned-promoparty, which was actually fun.

Then when we had the second date set, there was too much police presence and no one dared to go totally naked for most of the ride.

I opted for a minimalistic jockstrap, as well as many others, and some body paint (it said ‘Green light to bikes’ on my back). I also had a tree fixed in my bike bag, as a symbol of Green.

That cherry bike painted on the back of one of my ride mates was my creation inspired by the logo of Pacha, my favorite dance club in New York. Actually, when I go out there, I do come on my bike 😉

We rode through most of Downtown and Midtown Manhattan,

and made a brief stop at Union Square for some dancing.

Only in the end, when police stopped following us, some finally disrobed totally on Williamsburg Bridge

and arrived to the after-party in Williamsburg just like that 😎

The after-party was at a bike shop, a perfect setting! I was spinning some upbeat electronica in the backyard.

I hope this year we’ll manage to cooperate with police more thoroughly, just like it was at the WNBR in Madrid when I was there in 2009, or as it happens regularly in London, which traditionally gathers the biggest number of naked riders. By the way, I wonder how WNBR will go in London this time, in the summer of the Olympics. But in any case, we need to organize the naked ride in New York, what kind of World Naked Bike Ride will it be without New York City partaking? And so far there is no certain information about WNBR NYC even regarding the date