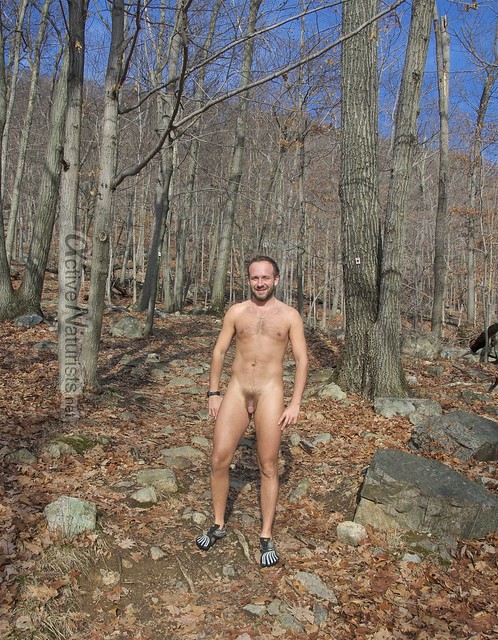 I rang in the New Year just as you’d expect me to do – in the nude! It was a fun Naked Comedy Show, and perhaps I’ll write about it in more detail later. But here’s a report from my Christmas day celebration, which came unexpected event to me – it was a naked hike in my beloved area of Pine Meadow Lake in Harriman State Park. With the current temperatures almost at their seasonal norm levels (cold!), it’s hard to imagine that we had those almost summer-warm days just a week ago. You might have heard that this December has seen record-high temperatures in NYC, so I decided to take advantage of the freak weather and get out for my first winter hike in Harriman park. I thought the previous post would be the last one about this place from 2015, but thanks to this winter adventure I can now say that it’s truly great any time of the year! 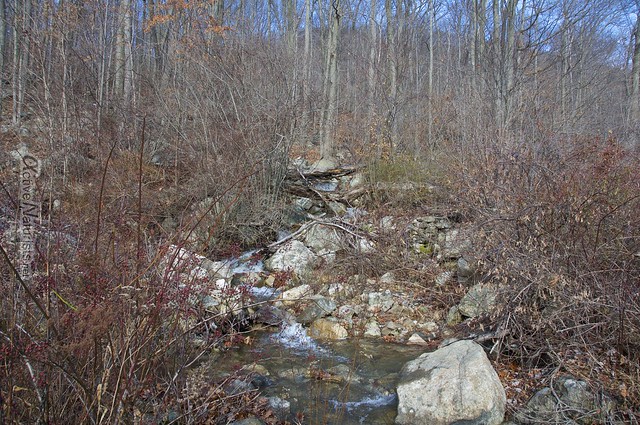 Well, there were no blueberries or raspberries, but quite a lot of other small fruits decorates the bushes. 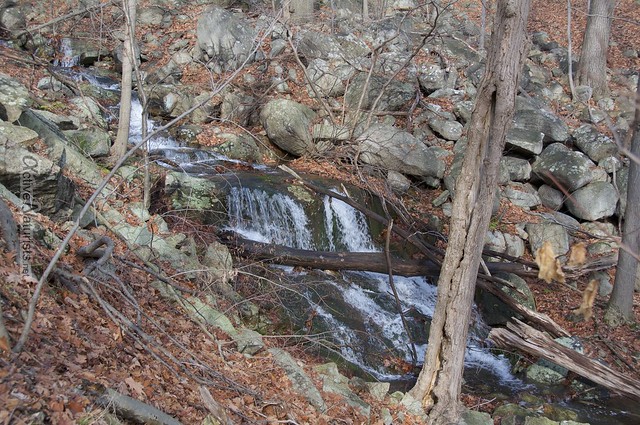 Otherwise the forest appeared pretty dead… which felt even weirder because it was as warm as in late spring. Just a few trees kept the leaves, while almost all were naked – and we followed the case 😉 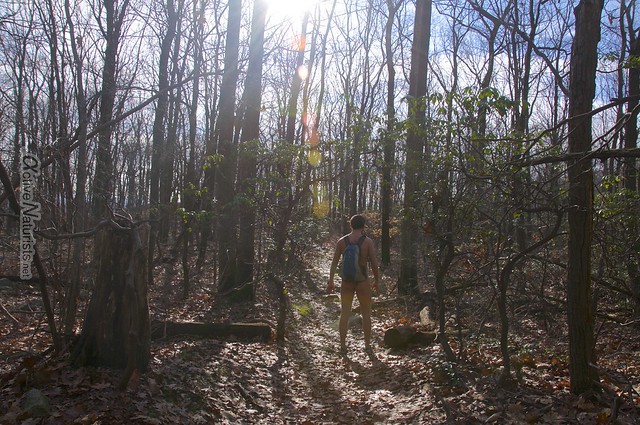 It was actually nice that the trees were leafless, because the sun could go through – in summer almost all of this hike is in shade, but this time it was good to feel sun rays throughout the hike. 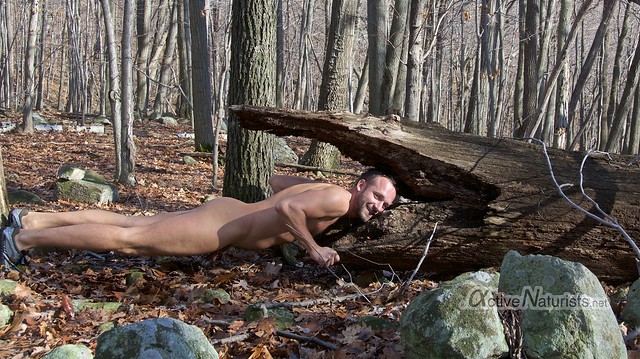 The forest was very quiet and besides this friendly prehistoric crocodile that let me pose with him, we hardly saw or heard any animals. 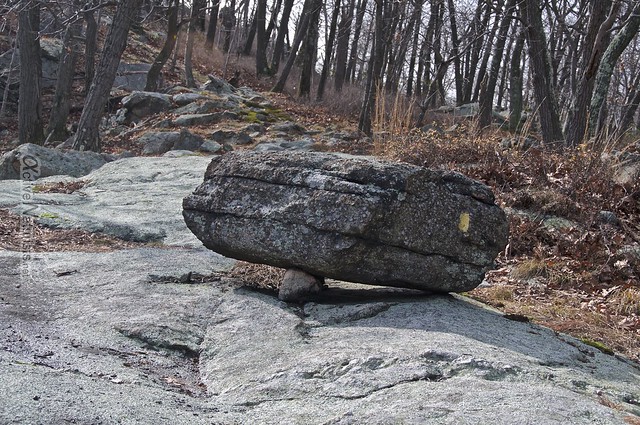 Maybe he also put this rock up like this? 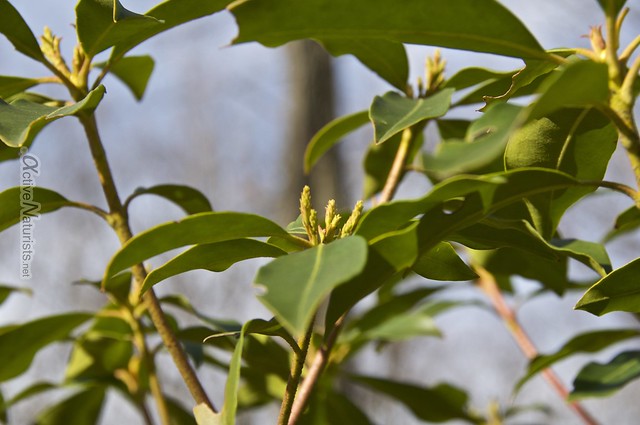 Mountain laurels were the only green bushes (besides coniferous), and they looked somewhat overoptimistic about the weather… Well, maybe they can keep their buds safe throughout the winter, but they looked like they were ready to open and grow. 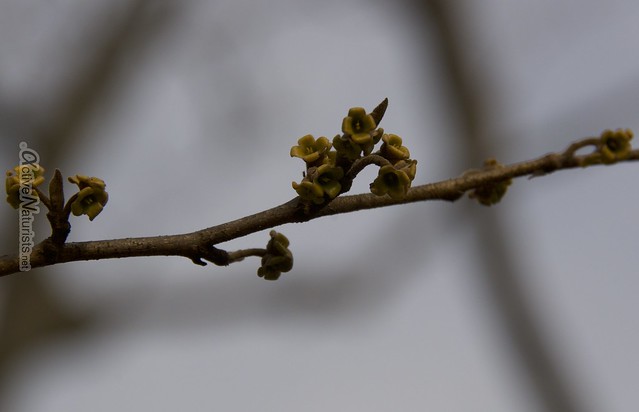 Others were decorated with fruits that seemed to be more suited for winter. 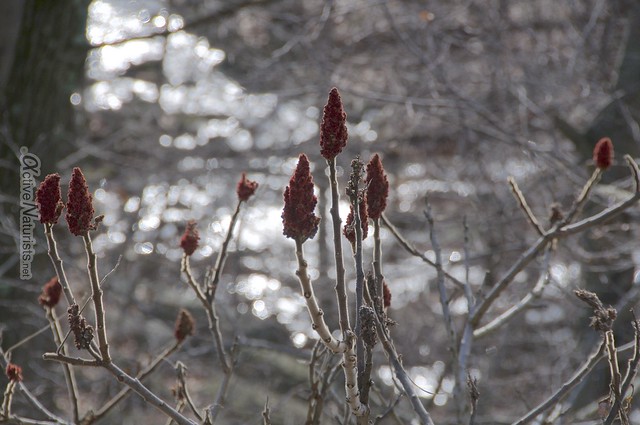 But once we got to the lake, we decided to decorate a small “Christmas tree” – with what we had: food, and berries from the plants around. 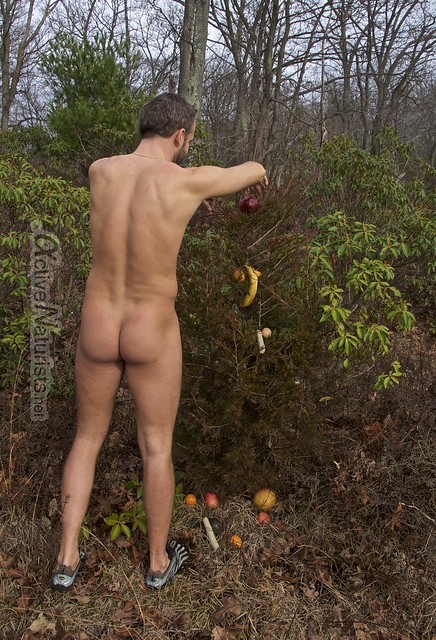 Before you call our decoration blasphemous, you should know that it was approved by Jesus. And before you think I’m crazy, that’s a true name of my friend (too bad he didn’t want to appear on photos). 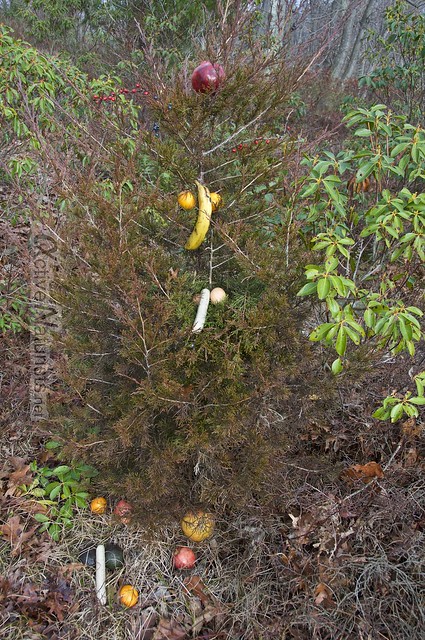 In any case, the tradition of decorating trees has pagan roots, and our phallic theme referred to fertility and revival… 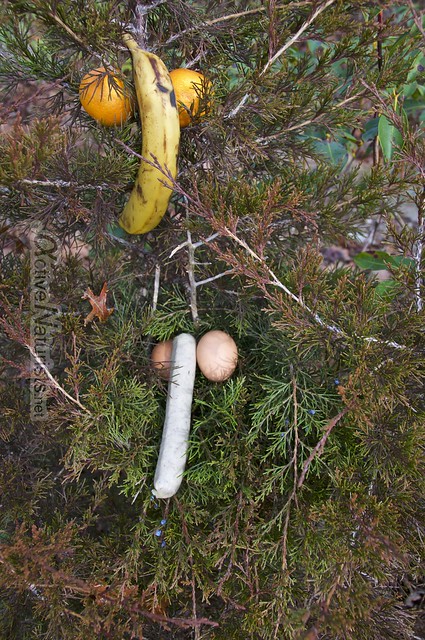 Too bad there weren’t many fellow hikers to appreciate that, and we soon ate our decorations. There was a small group of hikers though, who seemed to be genuinely interested in why we were naked. We explained a little about naturism, and how we wanted to enjoy the rare occasion of being able to be naked outdoors in December in NYC area. I have a feeling I may see them hike naked next summer! Otherwise, our company was limited to squirrels, chipmunks and a woodpecker. 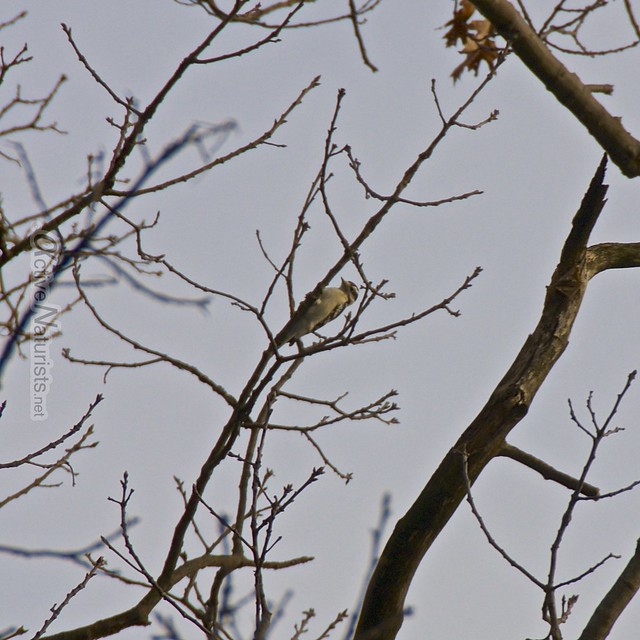 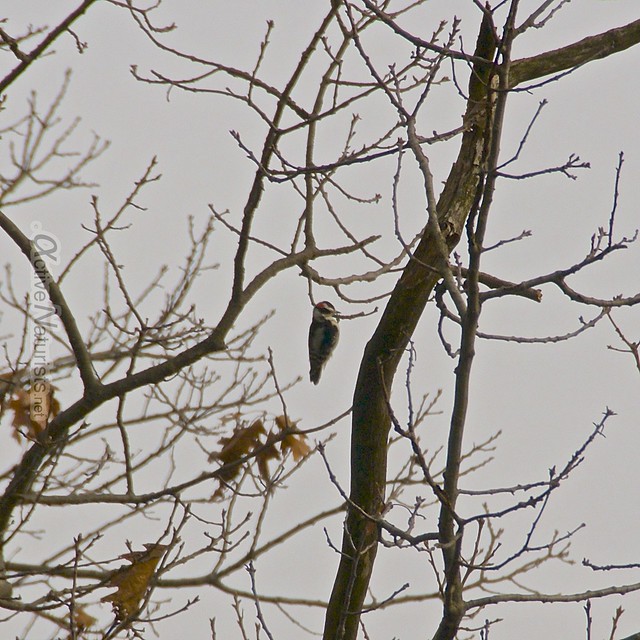 We walked around Pine Meadow Lake a little more, and discovered two interesting places. One seemed to be like a secret meeting point of a Stone Age tribe… or dwarves?) With stone chairs around a fire pit, it should be a great spot to camp out with a group! 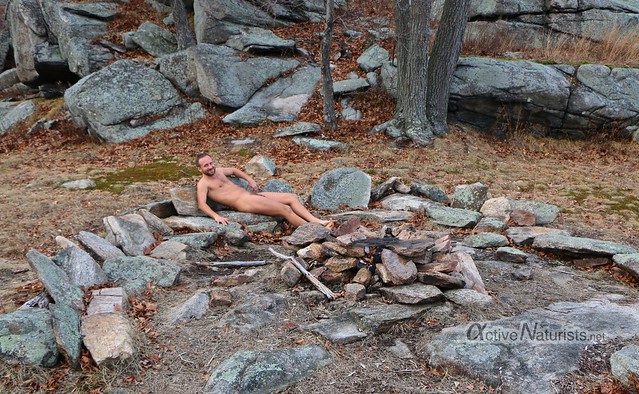 Then we saw a strange structure on the neighboring hill. This was particularly surprising, as it was in a part of Harriman State Park that I knew very well, having hiked through these woods many times. But only now, with the forest being naked, did we notice it. When we got closer, we started guessing what it could be. 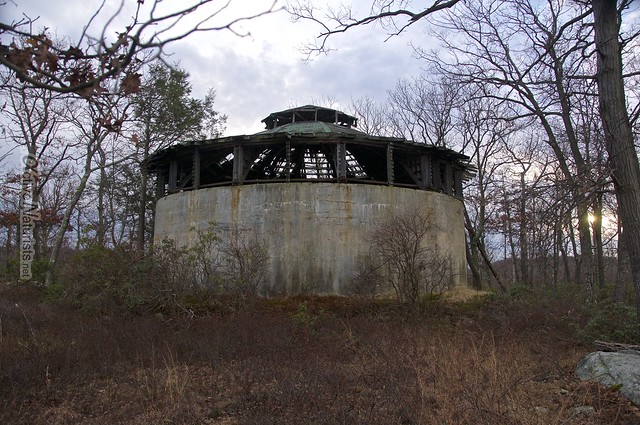 It was not an abandoned mansion, as we first thought, but rather a water tower.  Just to make sure it wasn’t some kind of giant sacrifice place, like mayan cenotes, we wanted to look inside. 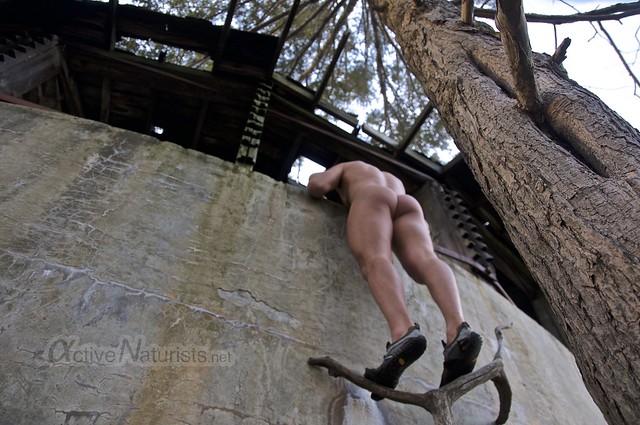 There was a fallen tree leaning against the wall, so we could actually climb it and have a look. No, it was a water tower after all… 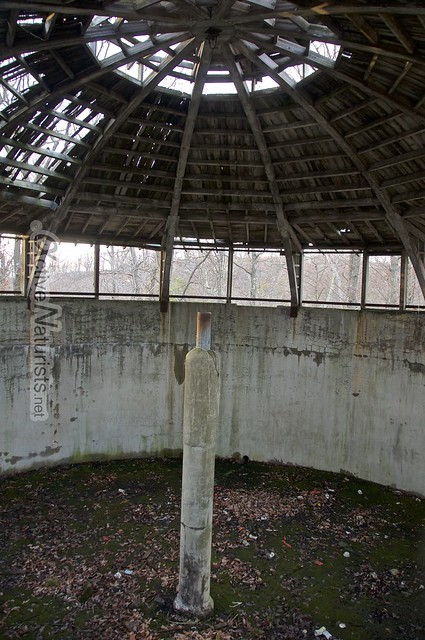 or a Phallus temple?

We soon had to leave as it was getting dark and cold, but we still hiked naked all the way back. I think it might have been my most memorable Christmas day so far! And having spent the New Year’s Eve at the naked comedy show, I am sure this year is bound to have lots of fun in the buff, which I also wish to all of you!

PS Of course we also skinny-dipped, and the water was shocking-cold, so it was literally a dip. I plan to go to Sandy Hook on Sunday for Polar Bare Plunge for a more social winter skinny-dip – is anyone else up for it?