By coincidence, as I was preparing yesterday this blogpost about an outing with the group of Nudismo Ecuador a year ago, they went to the same place; so I am starting with a few photos from their recent trip

… and continue with the story of my visit: A few years ago I got an idea to travel to either Ecuador or Peru and of course looked up options for naturism; Ecuador seemed to have a much more vibrant naturist community with a few active groups. I had to cancel and postpone my trip a couple of times, but a year ago I finally went there and indeed found a good bunch of local naturists. There is a couple of groups in Quito, with weekly gatherings at a pool with sauna and less frequent outings to thermal pools outside the city. Even though Ecuador is situated (you’ve guessed it!) at the equator, the capital and a few other major cities have pretty cool or even chilly climate being high up in the mountains (Quito is the second highest capital city in the world), so hot springs is a natural choice if you want to hang out naked. I had been in touch with one of the local naturist groups – Nudismo Ecuador – for a while, so when my plans solidified, I made sure to coordinate to meet up with them. So a dozen of us went to the thermal pools of Papallacta east of Quito.

There are no officially designated clothing-optional pools, but some admit naturist groups with prior arrangements. This one is called ‘El Tambo’. If you want to enjoy it sans clothes, coordinate with Nudismo Ecuador by e-mail. After parking, there is a short pebble walkway (quite slippery from the mist), 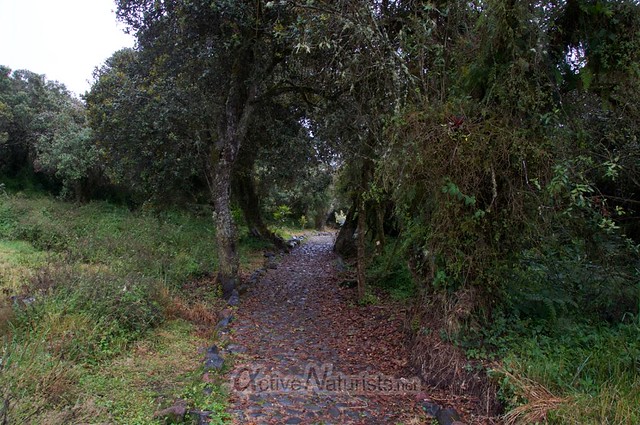 on which we stripped off right away, as from then on only sheep could see us. They seemed a bit a amused, 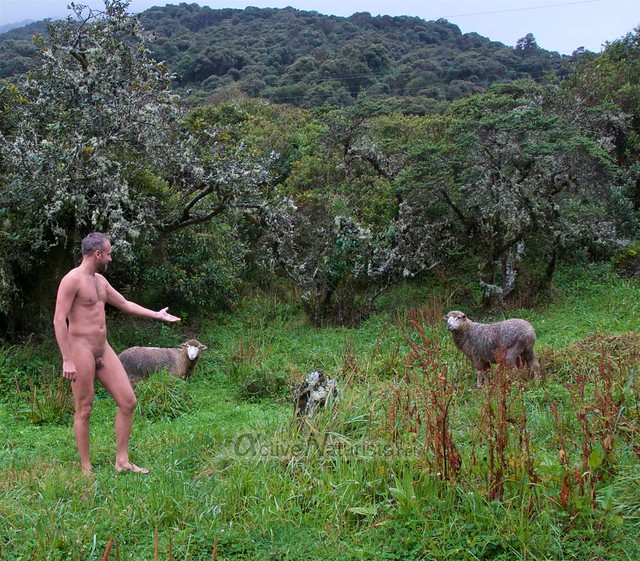 as at this altitude of 3.5km asl, even some plants prefer to have a wooly cover. 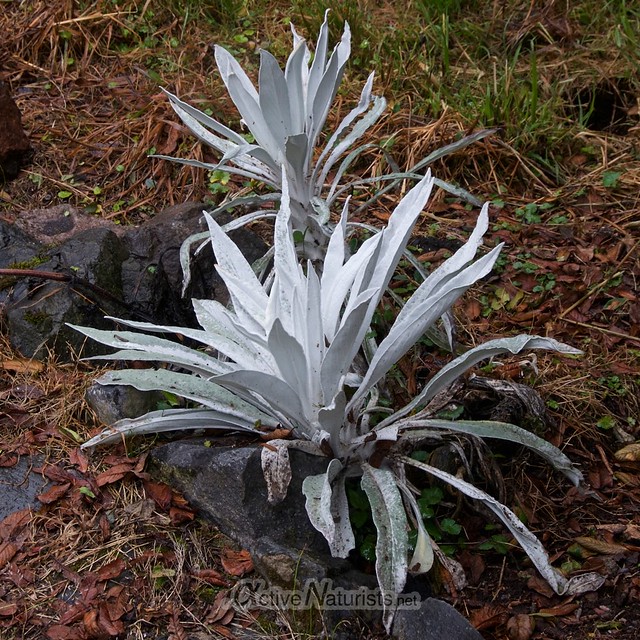 So, yes, it was quite chilly, especially in the mountain mist, so we quickly proceeded to the pool, 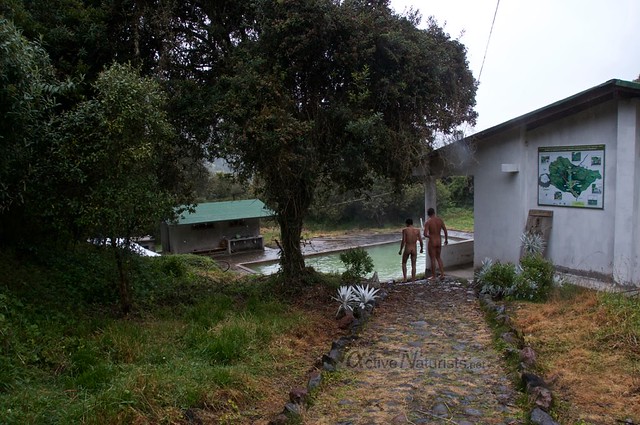 although some preferred to gain some body heat from running around the pool first. 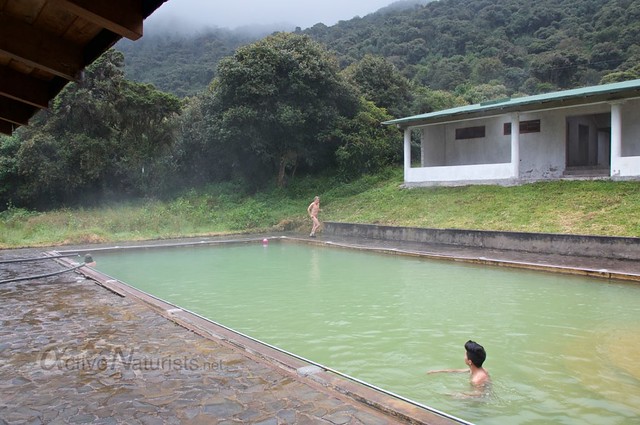 But once we were in, it was pure relaxation… until more group member arrived and we decided to play a ball game. The invented it on their own, so I was curious to try! 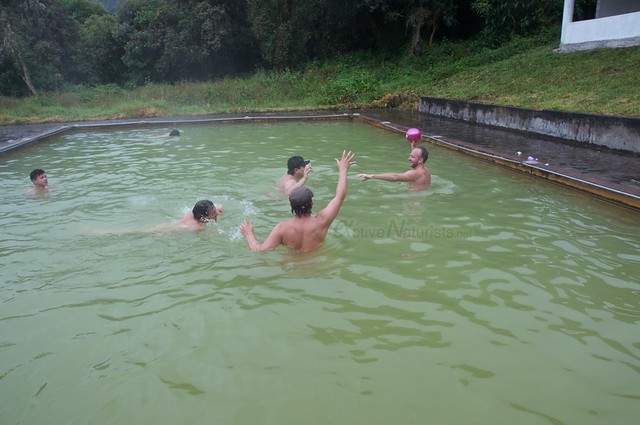 While water volleyball is common at naturist resorts, 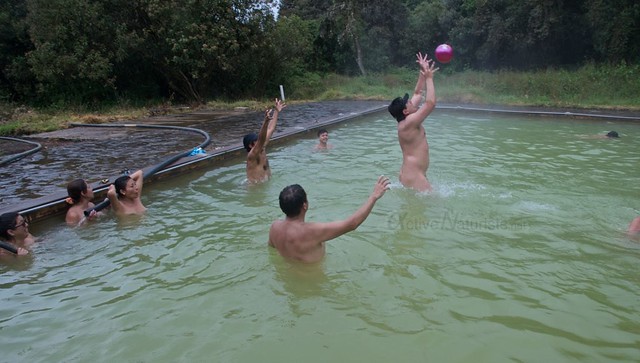 this one is more reminiscent of rugby: you score by touching the “gate” area of the opponent team. 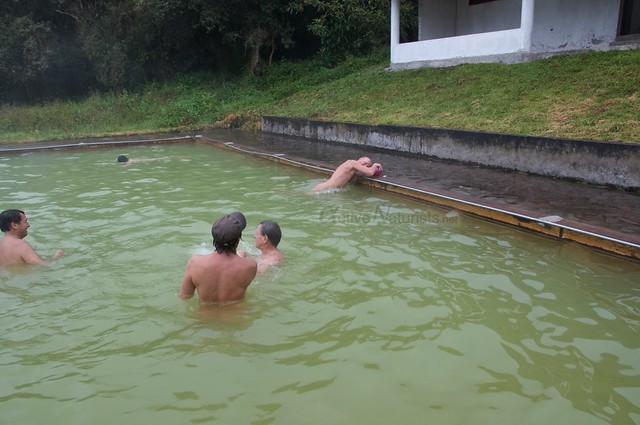 Due to having to run in water, passes are more common in this game, 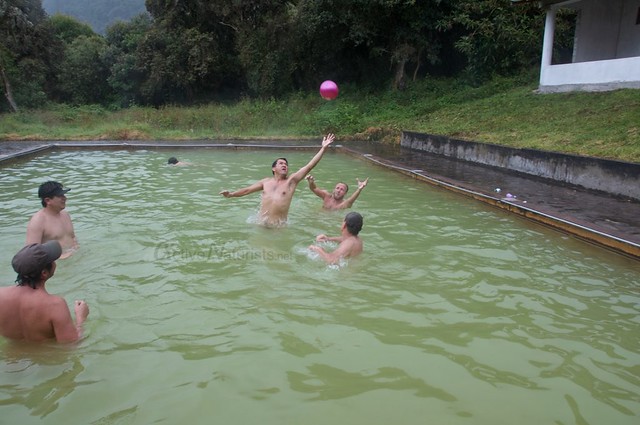 and less chance of injuries from tackling. 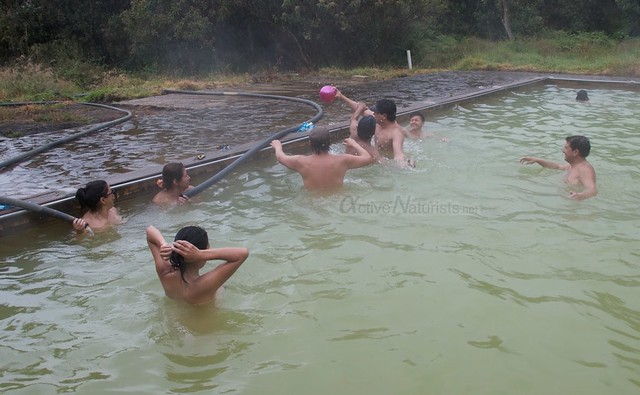 We did take it seriously, so the victory was well celebrated =) 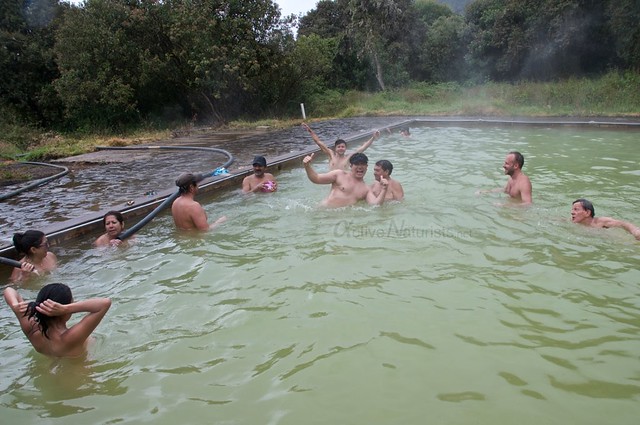 After the game, we were certainly warm enough to venture out for a brief hike, even though it was drizzling. 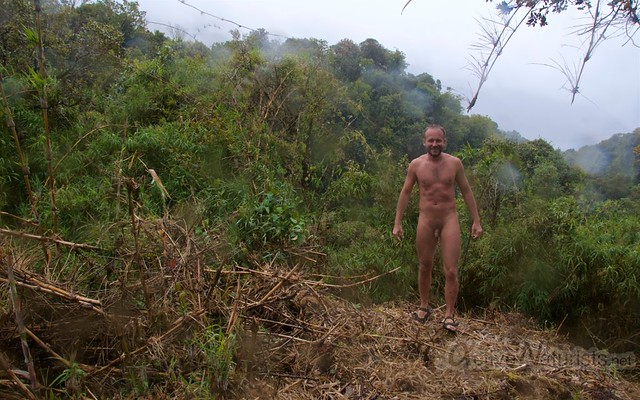 Some of the mountain peaks around are covered in snow – it would have been even more amazing to see them while hiking naked or enjoying the pool, but there was a thick cloud blocking the view (typical for the area). 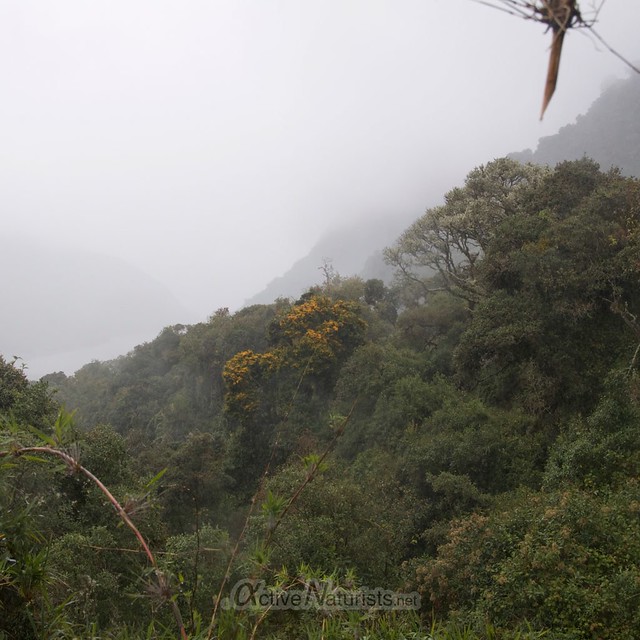 We went down to a small river, 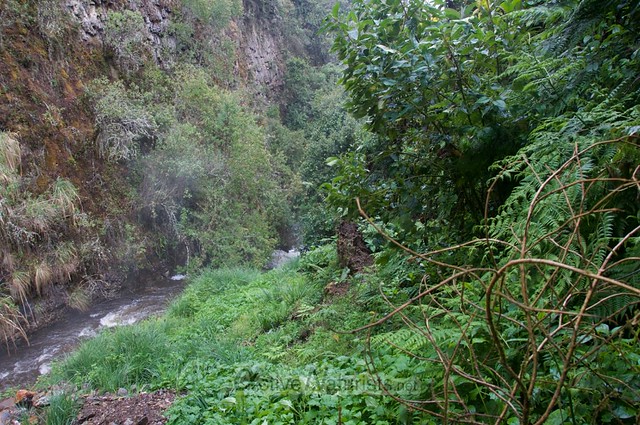 and on its bank there was a natural thermal spring 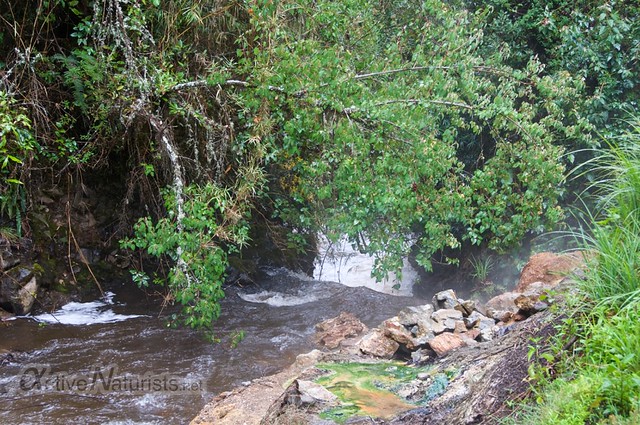 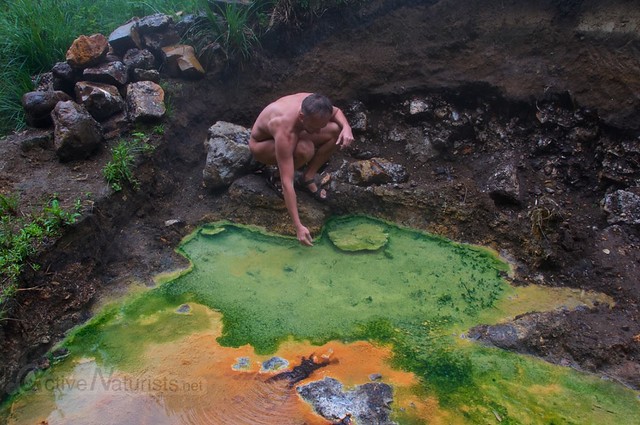 All that moist results in dense vegetation. 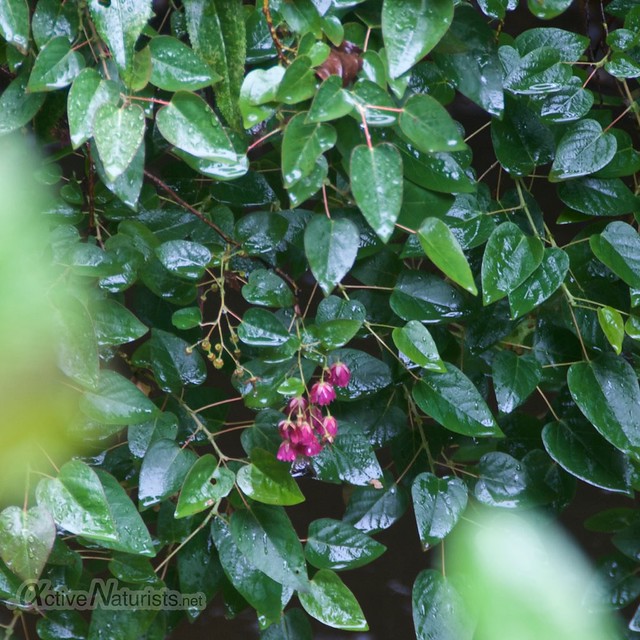 Some plants were blooming, 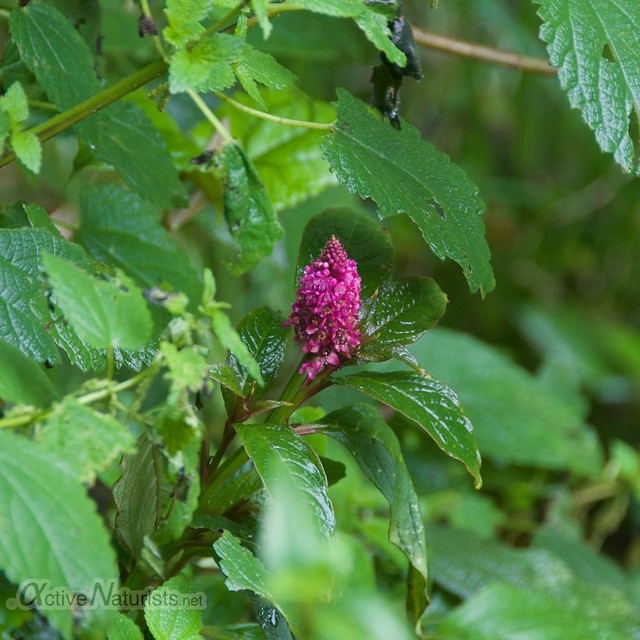 and tree trunks were covered in ferns, moss and lichens. 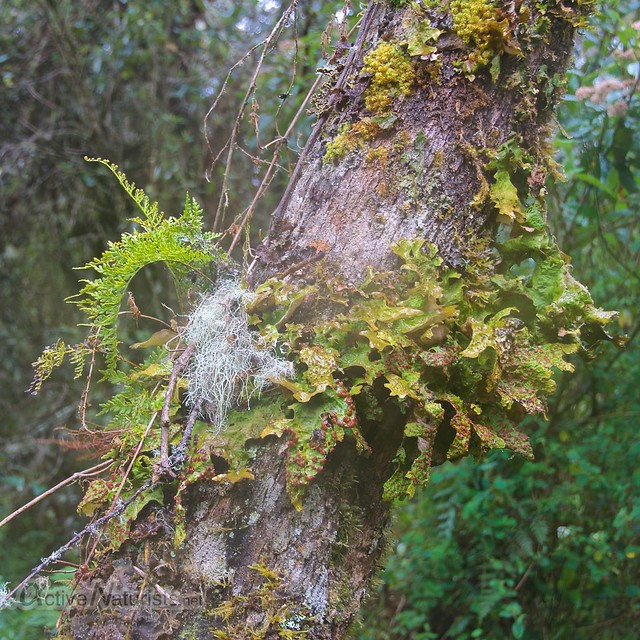 After the hike, it was already time to go back to Quito, but that hot shower felt amazing! 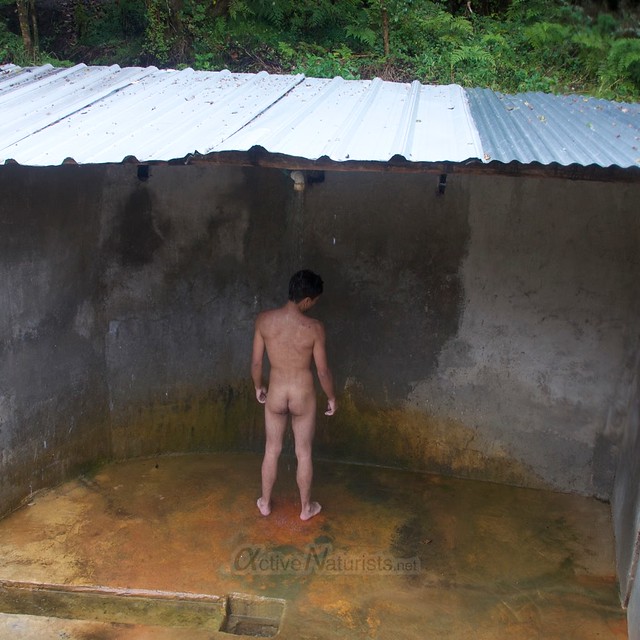 So even though there is not much official recognition of naturism in Ecuador, local naturists are certainly very active, and my further travel proved that there is plenty of opportunities for naturism!

While winter’s attempt to reinstall its reign over New York City on Monday night failed totally, with the morning rain washing down almost all snow and the afternoon sun dealing with the rest, my friends in Europe are still suffering from yet another particularly long and snowy winter. So, here is probably my last blogpost of the winter season. Well, this one is from Californian ‘winter’, so don’t expect anything like jumping in the ice hole in the Moscow River, or frolicking in the snow by the naked gym in Paris… but rather soaking in hot springs! California has lots of those, so Niko and I spent some time choosing which ones to visit on the way from Eureka to San Francisco. Orr hot springs called our attention by having a reputation of providing exquisite tranquility; it is a cute rustic resort with small cozy cabins, excellent self-service kitchen, and of course saunas and baths filled with natural thermal water.

Orr hot springs are quite easy to reach from Bay Area, but seclusion is one of their key words. There is no cell phone service, no wi-fi, and actually, not even an official webpage! I don’t think there is a lack of visitors though, thanks to the word of mouth and reviews in Yelp… and websites like this one 😉 Therefore, to make sure there is a spot for you, reservations by phone are required +1 (707) 462-6277.

We arrived quite late in the evening and had the main bath for ourselves for a while.

It was gorgeous full moon night, and mist gathering above the hot springs made the whole place look mysterious.

In the morning, the mist highlighted sun rays peeking through bamboo.

… and the mist that condensed on the grass around hot springs, provided another pretty display – hoar frost – and a proof that it did get down to freezing temperatures during the night.

Not a problem though, if you are surrounded by hot springs and saunas.

After absorbing the heat of thermal waters, it feels just great to walk around butt-naked despite the cold.

By the way, the whole resort is clothing optional except for registration desk.

We explored the territory of Orr for a bit,

and after the check out time in the cabin (noon), we decided to go for a hike.

Unfortunately, there are no trails starting at the resort, but there are some in its vicinity, in the Montgomery Woods State Natural Reserve.  The afternoon was getting quite warm, and as we turned away from the main trail, I felt comfortable to get unclad.

This trail mostly featured young redwoods, as the area was probably still recovering after logging. One of the huge redwood stumps looked like a stage.

We didn’t see much wildlife except for a few birds and a couple of these ancient-looking creatures, red-bellied newts.

It was the first time when I saw an adult newt, as previously I only saw juvenile forms (efts) of a related species in Harriman State Park, NY. Adult forms aren’t that bright, except for the belly in this species. By the way, only preparing for this blogpost did I find out that their red belly “serves as a warning to potential predators, as [they] have enough of a neurotoxin … in their skin to easily kill an adult human”.

Speaking of warnings, soon we reached a fence with a sign saying that there was private property further up the trail and no trespassing was allowed. Why wasn’t there any warning in the beginning of the trail? We turned back and went down to the main trail, which went through old growth redwoods, including some of the tallest trees around!

We didn’t have enough time to explore the whole trail, but even the trees near the beginning were impressive.

In this forest of giants, we looked somewhat Lilliputian, but it made us appreciate only more the splendour of nature.