Haulover beach in Miami is  surely one of the busiest naturist beaches in the world, with reported million visitors a year. Tourists come year round and from all over the world, but I bet that New Yorkers are particularly common, considering that NYC – Miami area is by far the busiest air route in US in a “push to make South Florida New York’s sixth borough“. So I wasn’t too surprised when I stumbled upon a couple of friends from New York on my last trip there. (And that’s besides two other groups of NY friends who I knew were coming.) 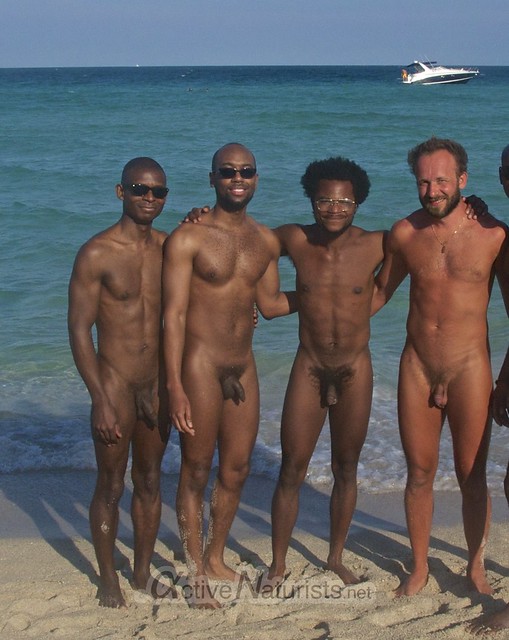 Haulover is also one of the best organized beaches thanks to supporting organizations such as the B.E.A.C.H.E.S Foundation Institute and South Florida Free Beaches. They provide free brochures where you can read about naturist movement and activities in the area (also available online). They help to preserve this beach for naturist use, which often gets threatened given that this is one of the last undeveloped beachfront lands in Miami metropolitan area that are not part of state or national parks. 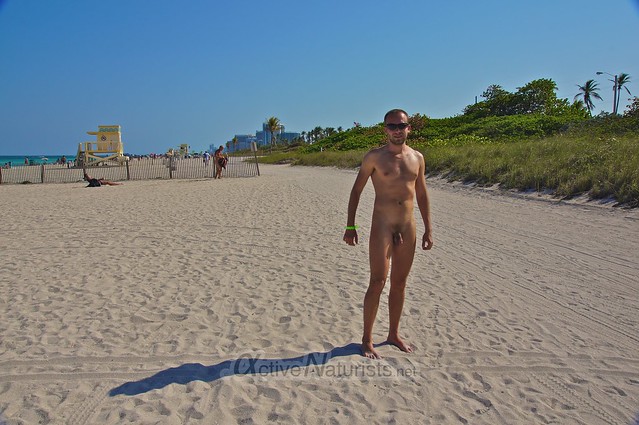 At least for now, we’re safe to enjoy this beach as nature intended 🙂

At the same time, the beach has all basic facilities that you’d expect from an urban beach – restrooms, showers, drink water fountains, volleyball courts, food trucks, and of course lifeguards. Haulover beach is accessible, but after I was run over by car on my trip to Florida last year, my favorite way of getting to/from the beach was on Tam’s shoulders. 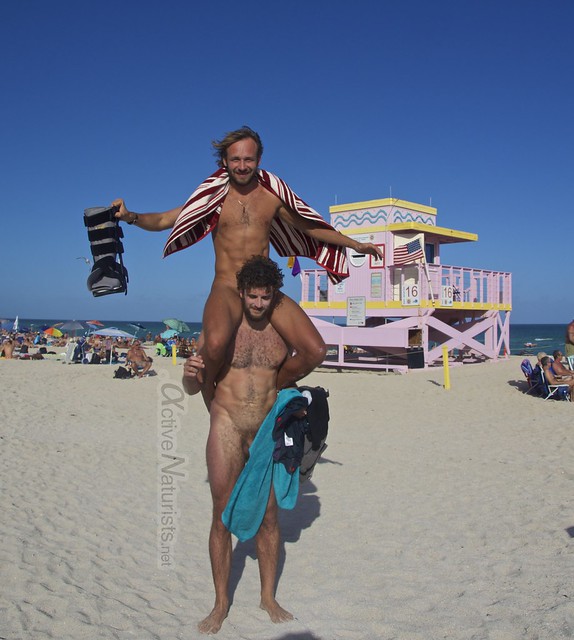 Guardhouses apparently also provide opportunity for exercising, at least according to Mat. 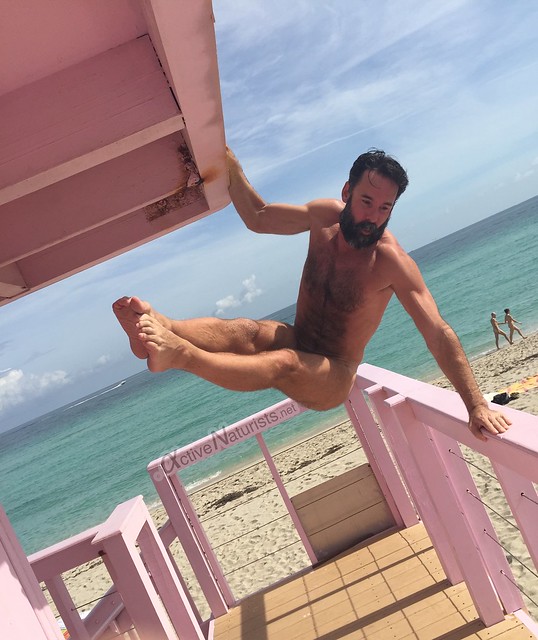 By the way, guardhouses in the clothing-optional section of the beach are painted pink, and yellow in the adjacent textile area – so, in case you go swimming along the beach it’s easy to figure out where should get off the water and return. And swimming is something you definitely should do at Haulover. The water is just perfect – clear and warm year round.

On my first visit to Haulover beach, which was with Joe and a whole bunch of people from  Florida Young Naturists event, besides having nice company at the beach, when we went for a swim we were accompanied by a school of small fish… Either they mistook us for their parents or thought we’d simply provide them shelter from sharks 🙂

In any case, they followed us for half an hour!

Sharks are sometimes spotted at Haulover too, of which you’ll be notified by the lifeguards, but it’s rarely a dangerous kind. From my experience, you should be more worried about cars in Florida…

I used to think that the only thing missing to make Haulover an all you-want-from-a-beach kind of place was surfable waves, but on my last trip I saw there a surfer too who managed to catch some waves – nothing spectacular, but he had fun. Well, I guess you can’t have it all perfect, but Haulover gets pretty to close to it when it comes to urban beaches. Altogether, it is a great place if you want to spend the day together with your friends in the altogether.