There are about two hundred and fifty thousand lakes in Ontario, and about one hundred thousand kilometres of rivers. If I could, I’d explore it all. In the southernmost part of the province, where most of the people live, the landscape has long been clear-cut, land-filled, and turned into pasture – and is now being swallowed up by suburbs and roads. But go north of the southernmost ten percent of Ontario, into the vast Canadian Shield, and small towns and cities sit like islands connected by bridges of asphalt amid an ocean of water, rock, and endless forest. 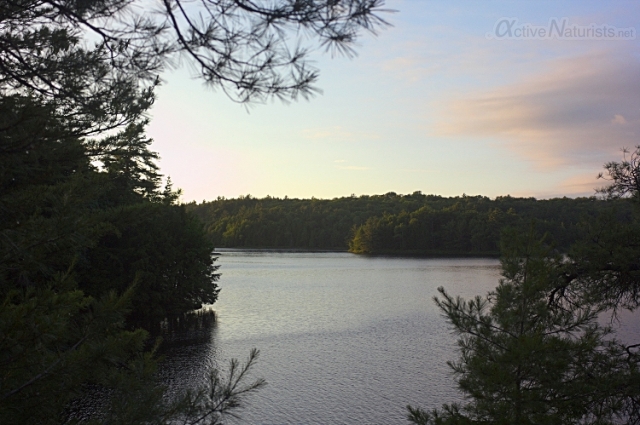 At the very northwest edge of that southernmost, densely-populated part of Ontario begins Georgian Bay – the name of both the enormous bay itself, nearly the size of some of the Great Lakes, and the land immediately surrounding it. This part of Massasuga Provincial Park is a favourite area of mine to go camping and canoeing. While it can get very busy during the spring, summer, and fall on cottage- and fishing lakes, especially toward the south end of the bay, the farther you continue north, like the rest of Ontario, the wilder it becomes – and wild is the way I like it. So this year I went with my better half during the middle of the week, and we planned on a few hours of paddling and a couple of portages to find an entire lake to ourselves. We were not disappointed.

Isolation was especially important because, inspired by this site, I hoped to spend as much of the trip as I could in the buff. (Bear in mind that nudity and “indecency” are illegal in Canada, but the laws, confusing and open to interpretation as they are, appear classically Canadian: Please don’t offend anyone, thank you. Steer well clear of other people and you should steer clear of the law – though don’t mistake my advice for a lawyer’s.) Little did I know that my account of it would end up here, so pardon me if the pictures are more illustrations of what I saw than a documentation of the trip itself.

After a long drive through rain we came to our launch point and the clouds blew away as if the sun knew we were coming. We had arrived in the confluence of the northernmost reaches of the great eastern forest of North America -with its sprawling hardwoods and firey fall colours – and the southernmost edge of the continent’s boreal forest, characterized locally by towering windswept white pines that spring as if by magic from cracks in the earth, with blankets of ripening blueberries 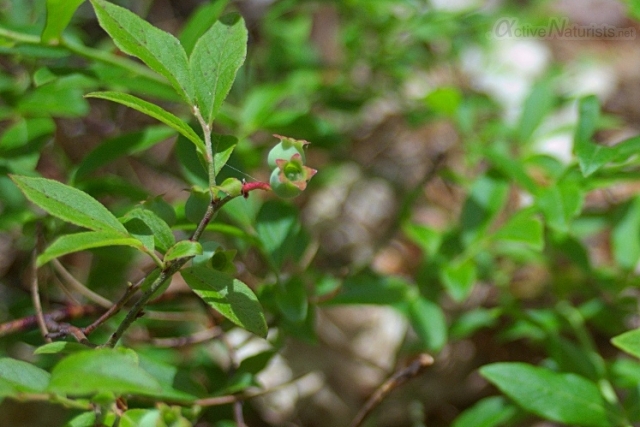 wild strawberries (now past their peak) 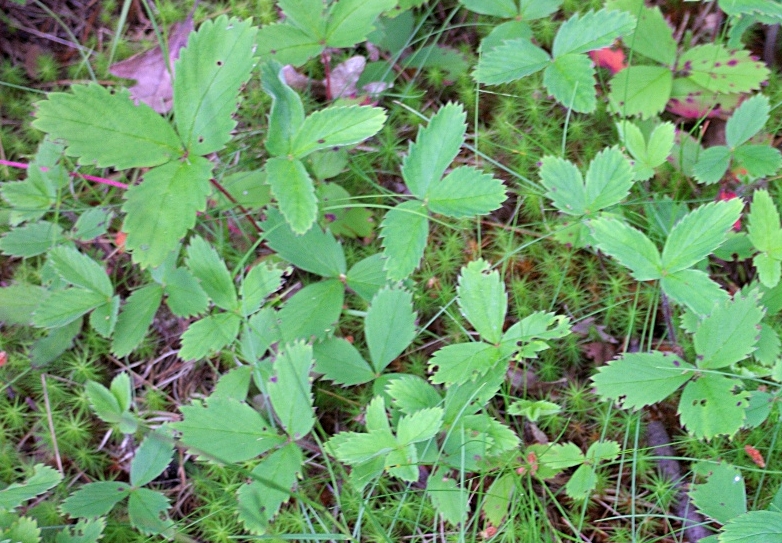 and juniper berries around their roots. 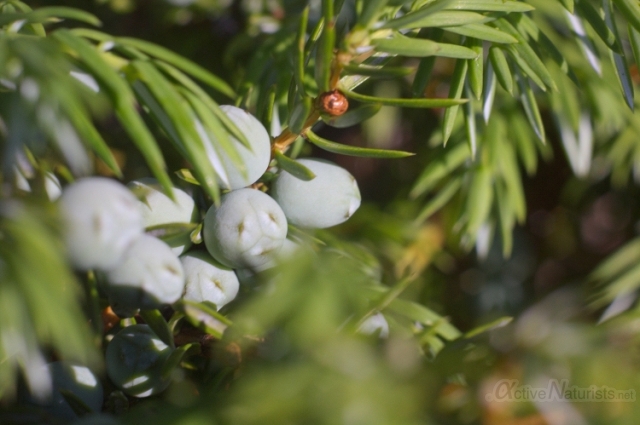 From this edible welcome mat we set off under the warm sun into lakes that were, considering the brutal arctic vortex winter that lasted well into spring in the area, surprisingly warm. Conscious that other paddlers use the launch – and being a little on the bashful side by nature – I left my swimsuit on as long as I was in the canoe.

The canoeing was, as ever, superlative, though we struggled at first against a quixotic headwind, from the port one moment, from the starboard the next. The landscape was pure Canadian Shield, a geological formation that extends far into the Arctic, created during a span of about two billion years beginning over four and a quarter billion years ago, about the same time life and liquid water were forming on Earth.

From under the thousands of lakes around Georgian Bay, the Canadian Shield wells up as sometimes-solitary, sometimes densely-packed islands in the water, like the backs of great stone whales – streaked with the pinks, blacks, and glittering whites of the planet’s younger days. We wound among those islands, marshes full of songbirds and basking turtles, and, in a bit of good luck, got to take some shortcuts through wetlands where the water was exceptionally high. 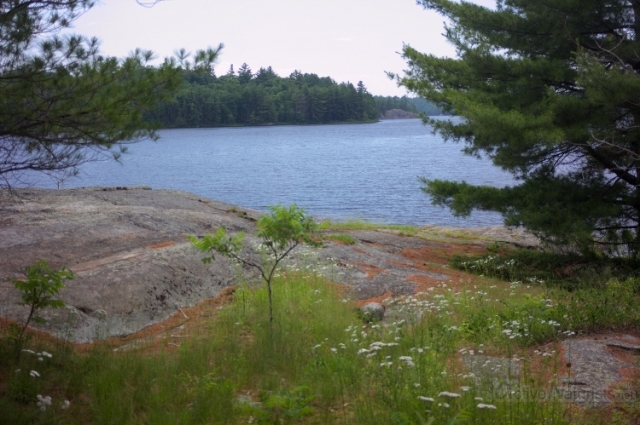 A quick note: Experienced canoers and back woods campers will enjoy adventuring out into Crown Land around Georgian Bay – leaving the busy cottage lakes and fishing lanes for bear country feels like heaven to me – but the less experienced have a bevy of Provincial Parks (clothes required) and naturist resorts to choose from in Ontario that offer a lighter introduction to the wild.

For me it was, as ever, a spiritual experience to explore the quiet coves and calm waters of the lakes and rivers we paddled through, each bent by eons of geological forces and scoured by receding glaciers into a kaleidoscope of shapes, like sworls and splatters on the map. There’s something sacred about them, a reminder of my place on this planet, a passing, precious second in a story longer than I can truly understand.

When we put in for our first night, it was in an out-of-the-way spot with a broad rock beach and a thick row of oaks, white pines, and juniper bushes that blocked the breeze from reaching our tent and provided privacy from the sum total of two canoes that passed by all day. 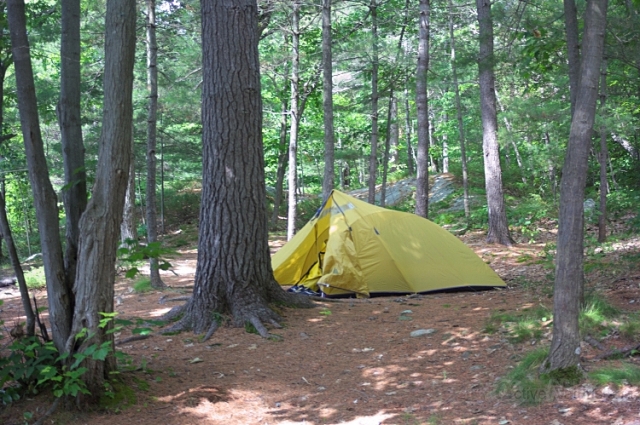 After paddling in the sun for the whole afternoon, and the wind having died back for the last hour, I was ready to swim as soon as we stepped out of our canoe onto the warm rock shore.

Still a bit skittish, and despite not having seen a human at least an hour, I got into the water with my swimsuit on after we set up camp. As soon as I got into the water I could feel my body asking me “what are you doing with these stupid shorts on?” So I took them off.

Well, bliss until a snapping turtle surfaced from the deep, I panicked, and in the confusion lost my rather expensive new swimsuit. I spent about an hour looking for it – which, as it consisted of swimming and diving for an hour in the summer sun in an isolated lake, was not any hardship at all – before my co-adventurer offered kindly “Maybe this is the universe’s way of telling you you’re not meant to use a swim suit for this trip.”

I choose to believe he was right, and dried off on the wavy slab of rock that sloped into the water where we set up camp. Sitting on that rock that was warm from the sun, that had sweetgrass growing from the cracks, that was older than the the oceans themselves, while feeling and watching the same breeze blow across the lake, the forest, and me, was a sensory experience I that I just can’t do justice to with words. If I wasn’t a naturist before, after that moment I don’t know how I couldn’t be. 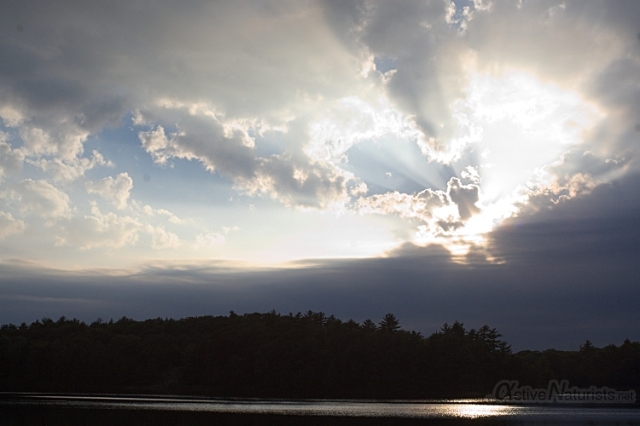 In the evening that first night, when the mosquitoes came out, I laid in a bowl in the rock, where I could see only treetops and sky, and where the gentle wind and emerald-coloured dragonflies kept the bugs at bay. The next day I woke up first and followed a brook back through the melange of maple, beech, and red and white oaks, and stands of enormous white pine and hemlock. The mix of forests makes the area great for tree lovers like me, who could spend hours wandering the woods and identifying species. In the quiet of the morning I felt more comfortable naked and confident that I was alone than I had the day before, and I worried only about the last of the mosquitoes that come out around dawn.

We spent the morning swimming and exploring the hills behind our campsite, and when I put a pair of shorts on again before we got in our canoe to move on through the wilderness, I must admit clothing felt entirely unnatural. 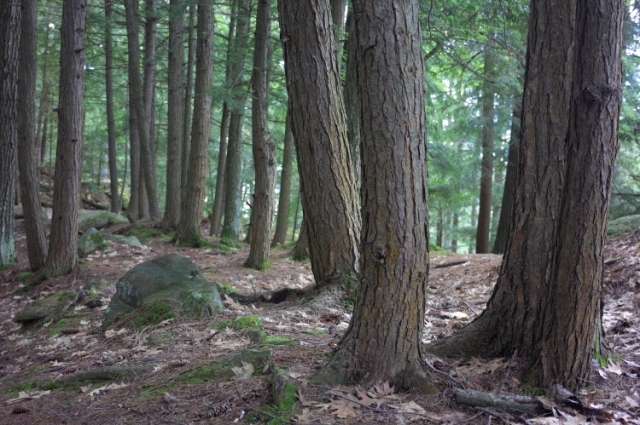 We settled down in a bay that day high on the Shield, set back in a forest of hemlock forest. 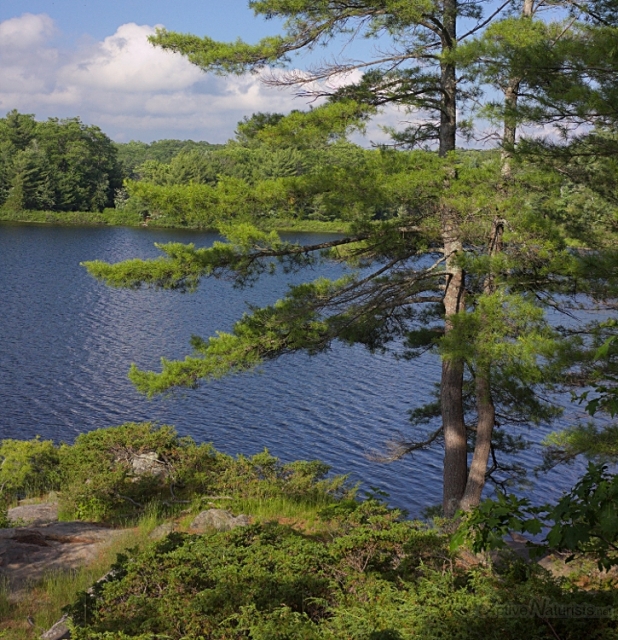 We shared the beach with turtles, crickets, various birds, and even a rare eastern ribbon snake. 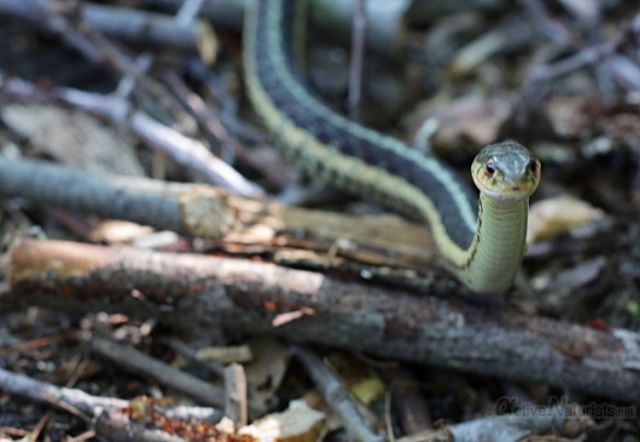 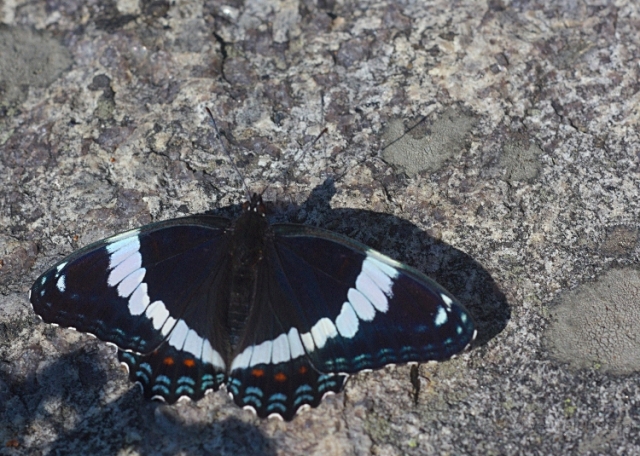 After hours of swimming and exploring the woods we had dinner and, tired from the day, strung our hammocks just back from the tree line. After dinner we read and talked until the mosquitoes came out to play.

That night the weather turned fickle again, and the unusually cool air returned. We canoed back to our car early in the morning, sad to go but with many stories and pictures to bring home.

Any many, many memories.

Perhaps my favourite is of lying on those warm rocks as the last light of of our first day seeped from the western sky and the stars revealed themselves in great swaths; of listening to ethereal loon song as the silver light of the moon held me, and knowing that I lay skin to skin with one of the most ancient places on Earth.