Skip to content
Felicity, a blogger from Young Naturists and Nudists America, has recently raised a question whether it is possible to draw an objective line between naturist photography, nudes in art and pornography in her blog. I am sure there are photos with naked people that no one would call art or porn, there are pieces of art with nudes that do not refer to naturist lifestyle and are not sexually stimulating, and pornography that is neither artistic nor naturist. But some imagery is much more difficult to classify. Felicity referred to the case of Modigliani paintings that at the time of their production were banned from display as pornography. 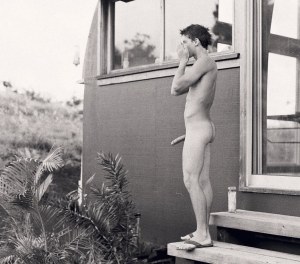 This guy might just sneak out his house to breathe some fresh morning air; he has an erection but it does not seem to be directed at anyone, there is no sign of any sexual behavior and the whole setting looks perfectly naturist.

And on this photo, the erect penis only adds artistic aspect to it, as it points in the direction where the archer is shooting. Otherwise, the image would be classified as almost casual naturist, so to say, as some naturist resorts, including the famous village de La Sablière, offer archery courses.
So while I understand that many naturist networks and forums are reluctant to let anything remotely erotic and even more so pornographic be posted, because they don’t want to sexualize their websites, in the end this does not sound any better than strict rules of Facebook forbidding any kind of frontal nudity, and the criteria are even more difficult to set objectively.