It’s been a month since the devastating earthquake in Mexico City, and let’s hope it will recover well, to be better than before. I saw quite a bit of this city in June during one of the most fun events imaginable: the World Naked Bike Ride! Already in my first ever WNBR – in Madrid 2009 – it was clear that such rides provide an amazing way to see the city, and in the company of hundreds naked (or so) people. Can you think of a better city tour? And it’s all for a great cause to promote cycling to be the major mode of urban transportation in response to ever increasing pollution and overpopulation. Nudity here helps to get the message across: cyclists use the pure power of human body (so, show that body!) – and yet we are the ones who are most prone to the truly indecent exposure to the traffic and vehicle pollution. 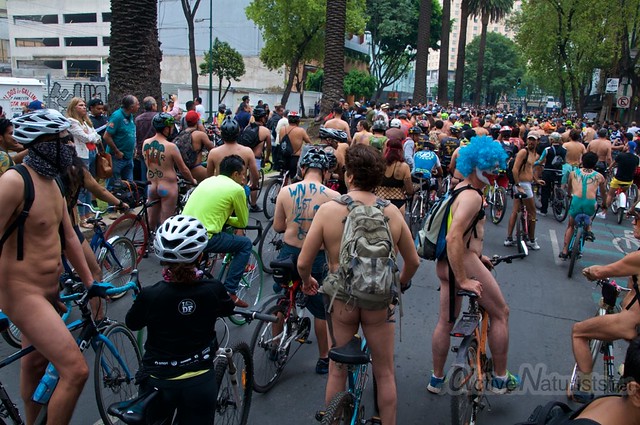 And it doesn’t hurt to get some more specific messages written on those naked bodies, so in the beginning of the event, many people spend time with body-painting and decorating themselves in other funny and creative ways. I had ‘energía pura’ written on my thigh, 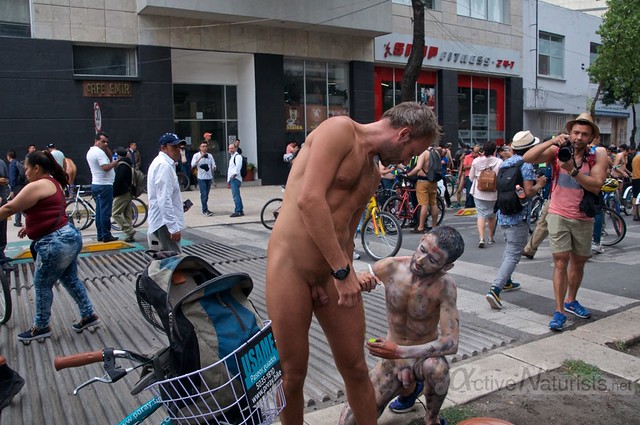 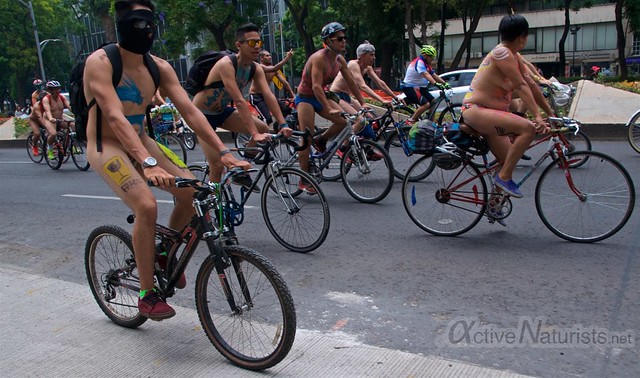 another reminded to keep the distance of 1.5 m away from cars (‘distancia de autos 1.5 m’), 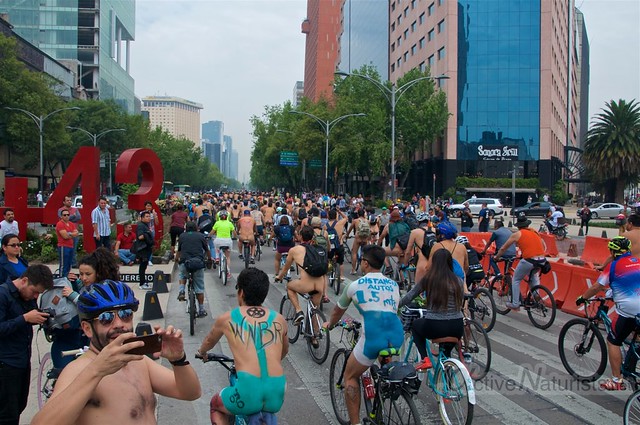 others just acknowledged their love to cycling, 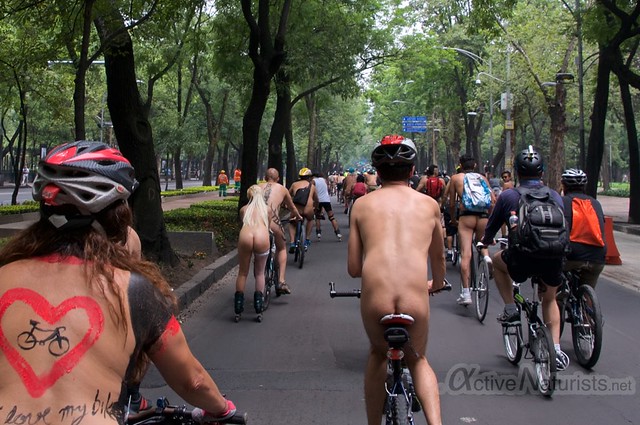 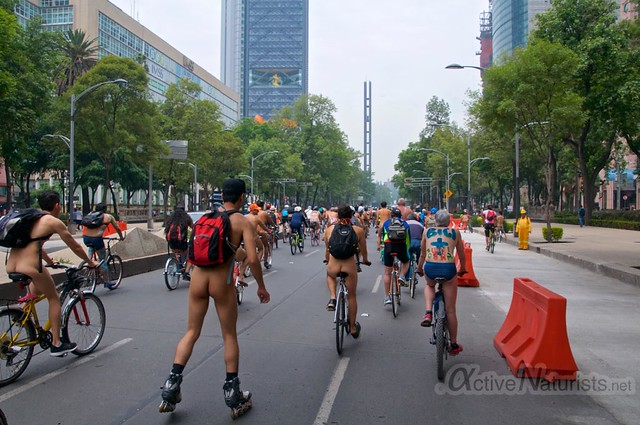 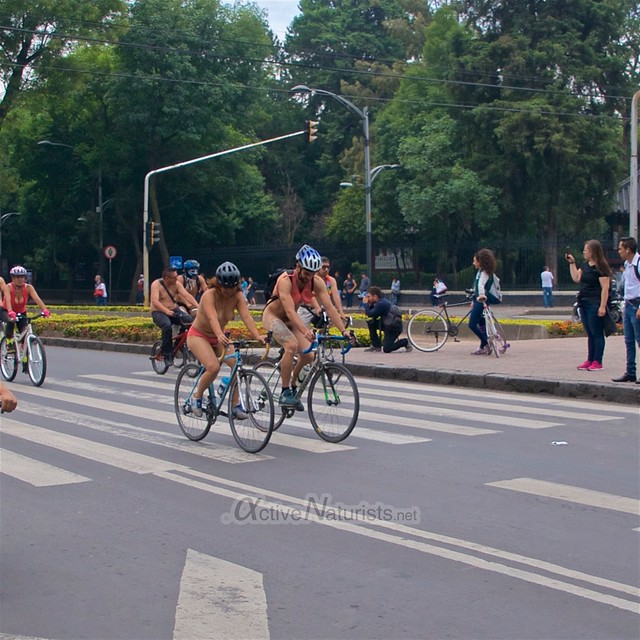 WNBR brings all kinds of people together, 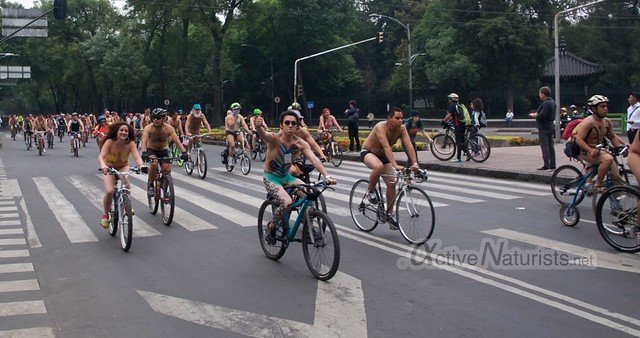 and naked, we feel even more united. 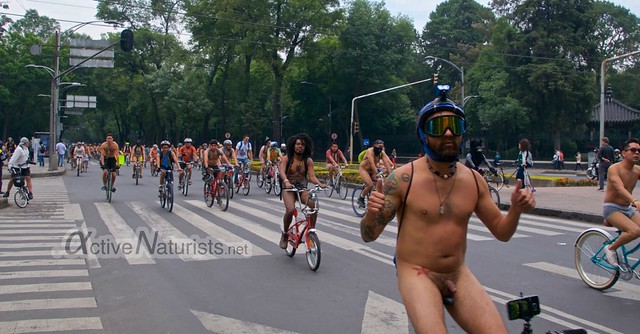 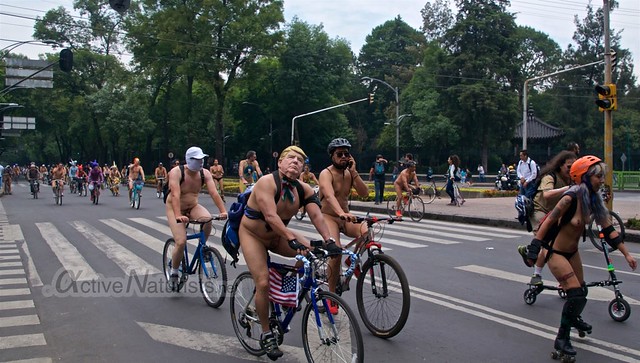 Haha! Oh well, that would have been quite revolutionary, but with his views on climate change and lack of respect to (at least female) bodies, this must have been just a sarcasm. By the way, one of the chants at the WNBR in Mexico City was ‘si Zapata viviera, en bici anduviera’ (if Zapata lived, he would go by bike). But he is not around anymore, and other prominent politicians are notably absent from the WNBR. So, can we only hope for superheroes?

Well, actually events like WNBR show that we all can be a solution, especially if we act together.

As always at such mass naked events, it was interesting to observe reaction of the public, and while the majority seemed to be quite intrigued by the parade, some were not as amused. 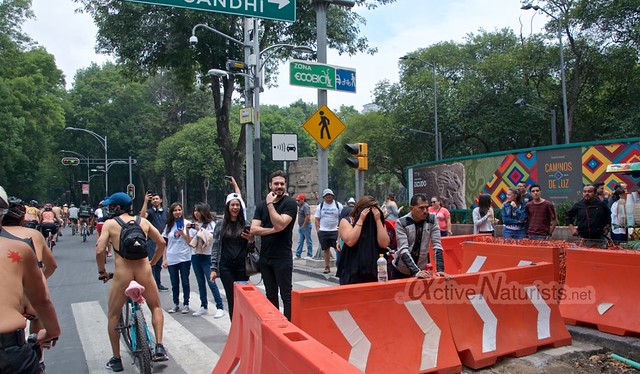 Certainly it’ll be helpful if not only general public but some businesses recognize the value of such events (though maybe that ‘Uber eats’ guy  just joined us on the way from work). 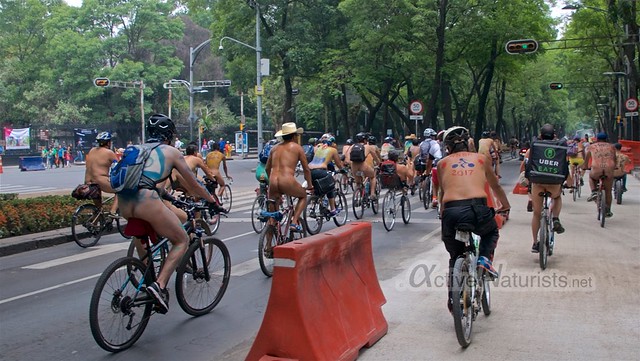 Well, bike rental services would be the most obvious interested party, and actually there were some offering special deals for WNBR in Mexico! 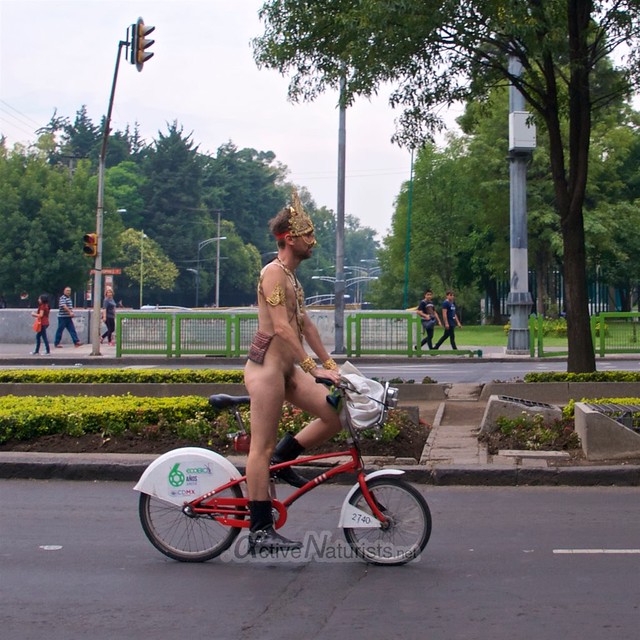 It is always nice to see other body-powered modes of transportation at these rides, such as skateboards and roller blades, as well as various forms of bicycles – tandem, 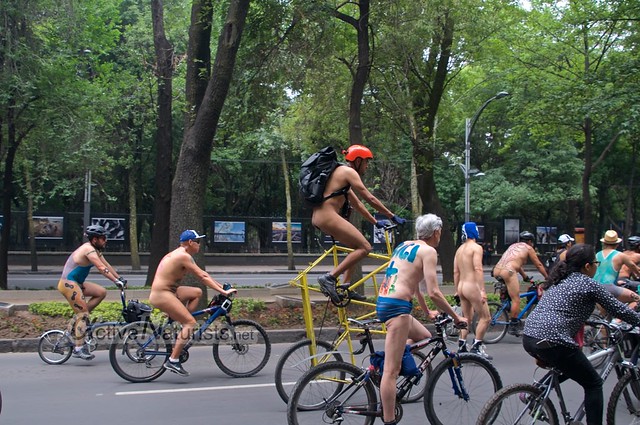 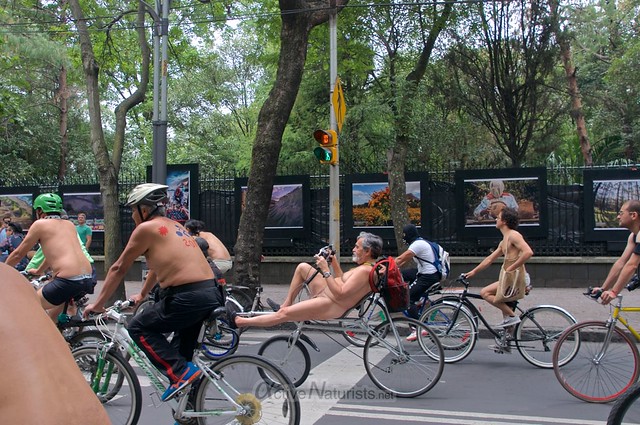 And this sculpture was seemingly participating too, though it attracted a bit less attention. 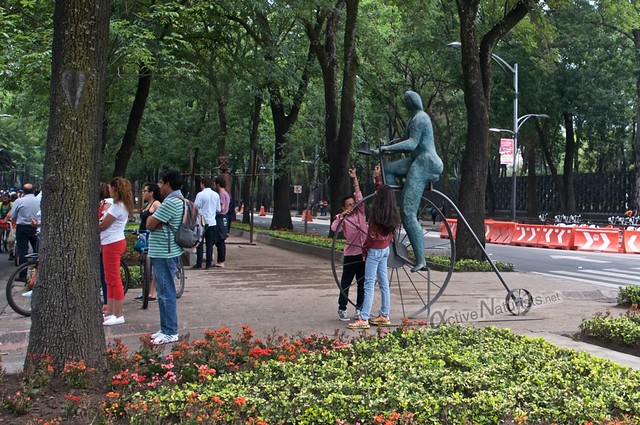 We had a brief stop at Auditorio Nacional on the avenue of Paseo de la Reforma, 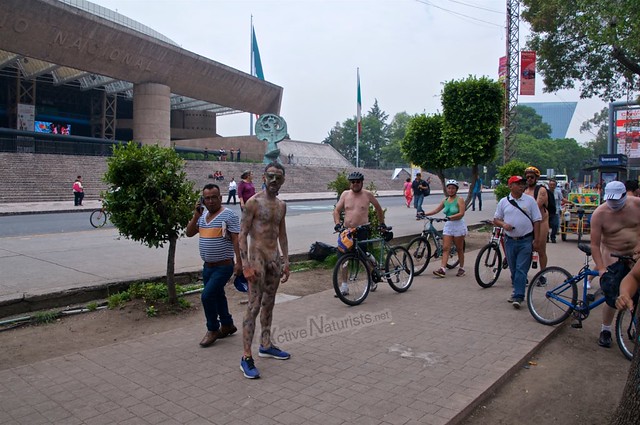 but quite a few people also stopped to take pictures with the sculpture of Alas de México (Wings of Mexico). This is apparently one of the most photographed places in Mexico City (well, as it is obviously set up perfectly for a portrait), but I guess there are not many possibilities to take a nude photo there, even though its sculptor, Jorge Marín, would surely approve that, as most of his creations are nude or almost nude. 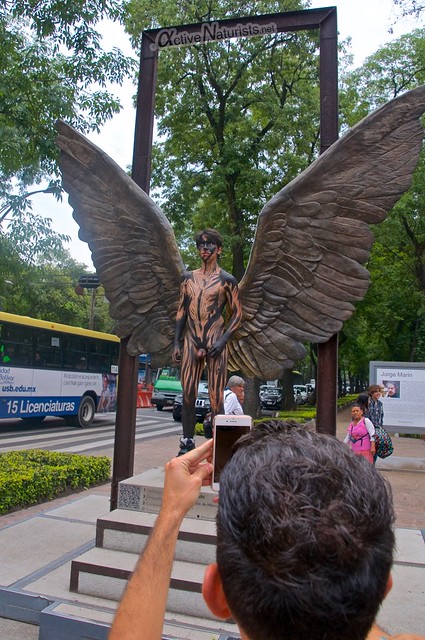 After that, we were back to the streets, 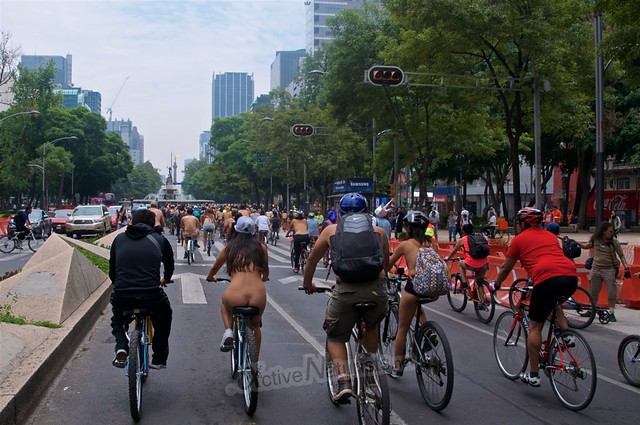 in the true spirit of the World Naked Bike Ride.

Unlike in New York City, but similar to other major cities that host WNBR, this manifestation here was sanctioned and supported by police. The route has to be coordinated in advance and changes every year. Sometimes it goes through more parts of the city, sometimes fewer; this year it covered a decent section of the center, but apparently there’ve been longer rides in its history. We ended at the same spot where we started, which was nice to take some photos with another landmark – Monumento a la Revolución. 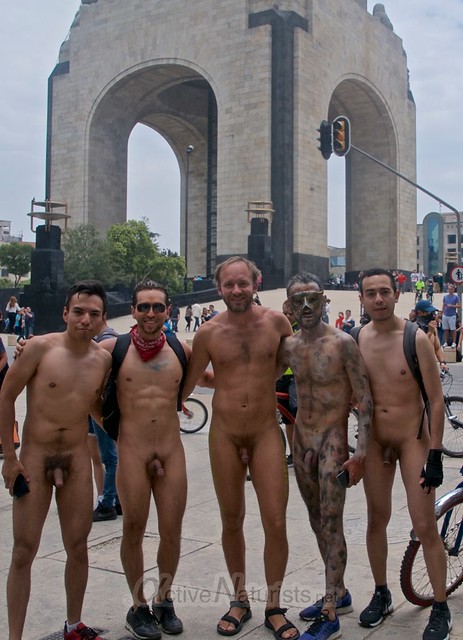 With so many participants, in the end there were still some that I hadn’t seen during the ride with interesting body paint (Día de los muertos style), 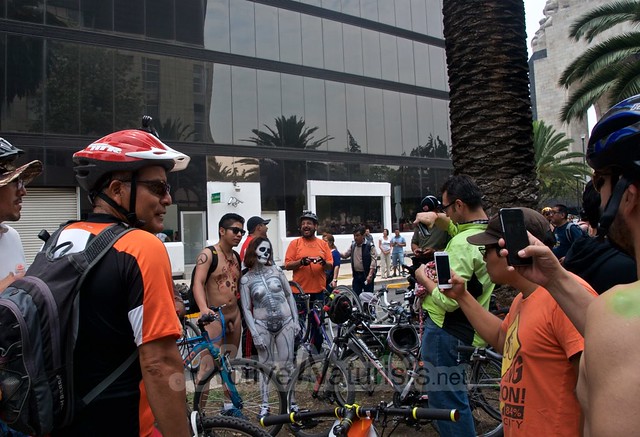 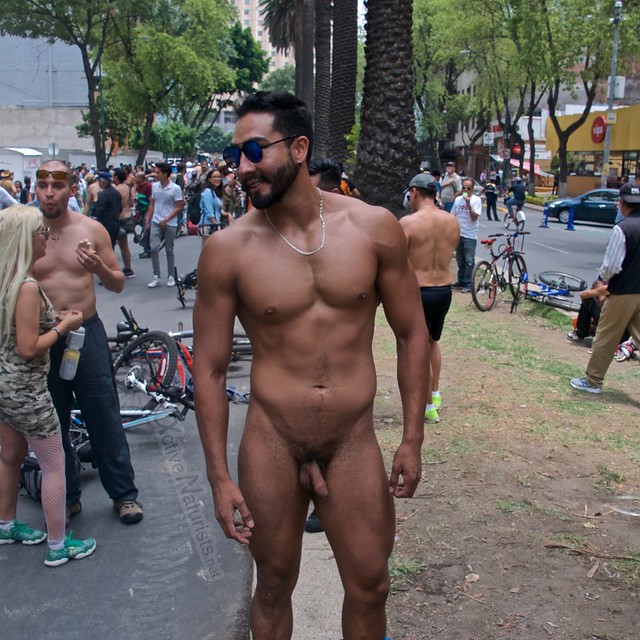 There also was a street vendor with ice-cream, which was perfect after the ride. 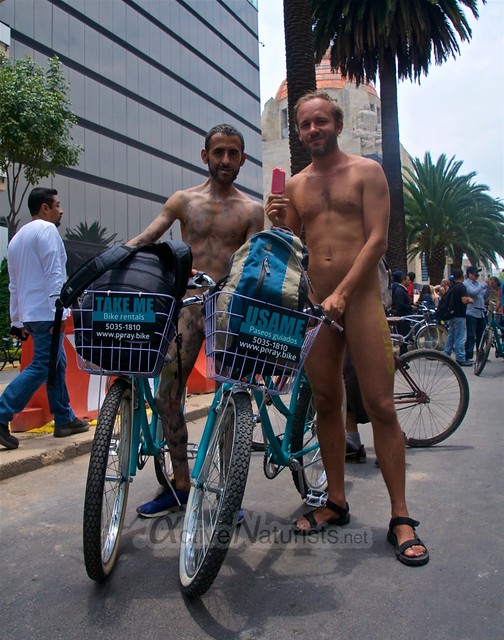 And I enjoyed a few minutes of just being naked on the street, as if it was just another day in the city… but without clothes. 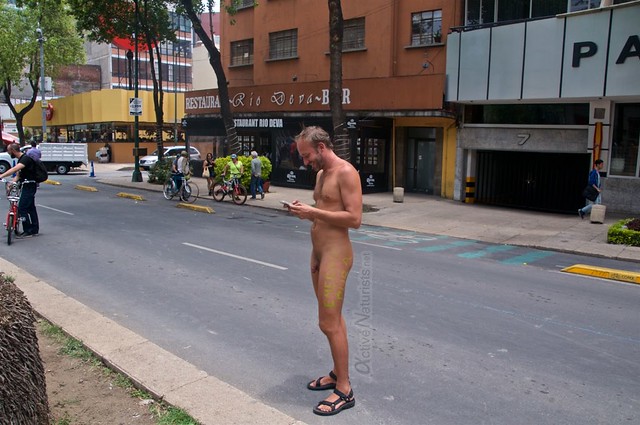 One can dream! But World Naked Bike Ride certainly helps with body acceptance and thus may make that dream come true!

Here is a bonus – a 15-minute video excursion through the center of Mexico City with a bunch of naked people.