After participating in the Naked Volleyball Superbowl last year, I got the volley bug and now want to visit as many such events as possible. Before I get to the report from Volleyball Super Bowl South, I’d like to announce a few other naked volleyball tournaments in which my friends and I are going to partake this year:

– Banana Rum Cup on the weekend of 20-21 June at White Tail Resort in Virginia (this one I personally will skip, because I don’t want to miss a trail race that’s become a yearly tradition);

– Sunny Bowl on the weekend of 25-26 July at Sunny Rest Resort in Pennsylvania;

– and again The Original Naked Volleyball Superbowl on 10-13 September at White Thorn Lodge.

For a fuller list of naked volleyball tournaments in North America refer to Nudist Volleyball website (and if anyone knows of similar lists for other parts of the world, let me know!)

As to my report from Volleyball Super Bowl South, I have to disappoint right away that there won’t be any pictures or videos from the volleyball tournament itself, as photography is not allowed at this event, just like at White Thorn. You can see what I think about such no-photo policies at naturist resorts in my previous post, but I still hope that one day I’ll be able to produce a complete reportage with video footage from one of these volleyball tournaments, just like you would expect from any other sport event. The picture below is the only photo with volleyball you will see in this post, and it’s not even used for playing 😀 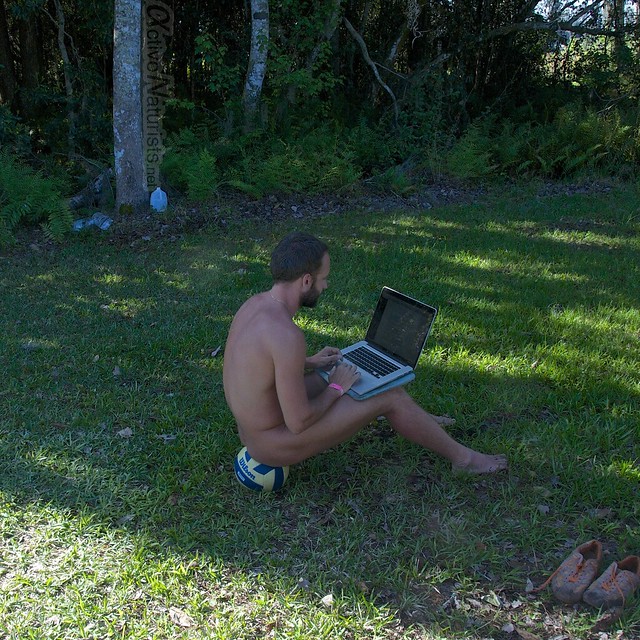 Super Bowl South takes place mid-March at Lake Como naturist resort near Tampa, Florida, and attracts a couple of hundreds participants – a lot fewer than the event at White Thorn but still an impressive number. And I guess I can’t help but compare these two events. I saw many familiar faces, and perhaps because of a smaller crowd and less busy program, there was more opportunity to socialize and get to know other participants.  But if at White Thorn I had an impression that the entire resort, including the residents, was involved in the Super Bowl in some way, it seemed like most Lake Como residents were rather detached from it. It still very well organized, however, and there even was a small fair on the weekend.

Most players camped at two lawns at the front of the resort. 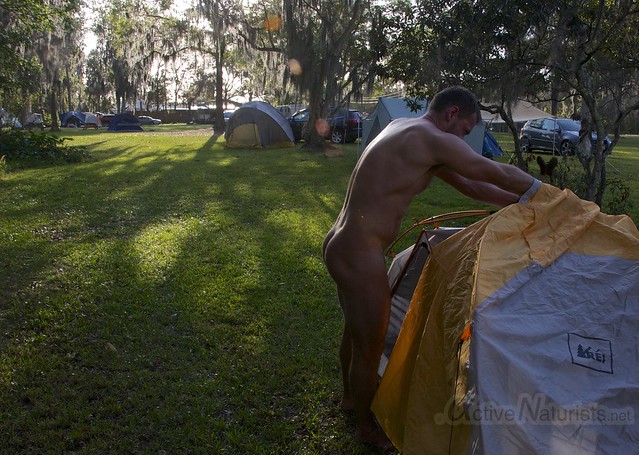 The grass was very nice and soft, and there was also enough shade from cypress trees covered in Spanish moss.

Majority of younger people were a part of Tiki-Tombas group and camped near the entrance to the lake. I joined their team from Novice+ division. Besides a few volleyball matches during daytime, we had lots of fun playing silly games by the fire at night. The rest of the time we spent mostly hanging out at the pool and hot tubs, and a bit of hiking. By Saturday, we had to have the teams formed more or less, and played several matches to determine teams’ levels. Our team did very well, winning 4 out of 6 games, so we were all hyped for the main game on Sunday. Between the dinner at the local restaurant (it was pretty good, but typically for a naturist resort, without too much of a healthy selection) and relaxing in a hot tub, I went back to the court to practice serving with my glow-in-the-dark ball, I just couldn’t get enough! However, on Sunday our team didn’t do so well, losing almost all matches. That’s when you start saying that you participate in such events to have fun and not necessarily to win 😀 Well, fun was certainly had, irrespectively of results! After novice league was done, we enjoyed watching the pros of A and AA level, and thankfully they kept on playing well into the early evening.

Even though I don’t have any volleyball-related imagery to share, there is still a couple of photos from Lake Como resort in line with Active Naturists’ credo. 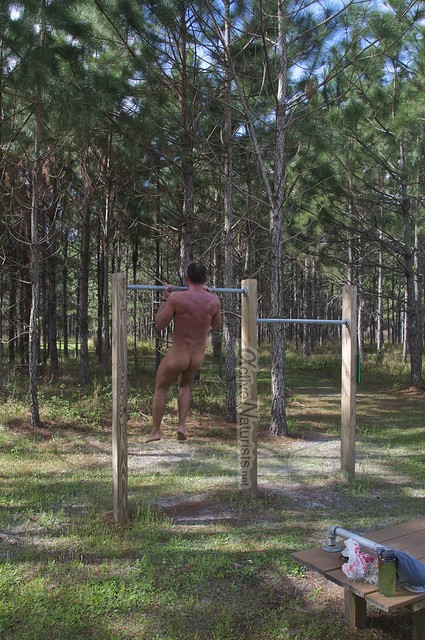 At the outskirts of the resort, next to the pine woods, there was a couple of apparatuses for calisthenics. I hadn’t done calisthenics outdoors since October, so I was happy to do it out in the open, and even more so naked! I shared my routine with Peter, and he gladly did some exercises too. 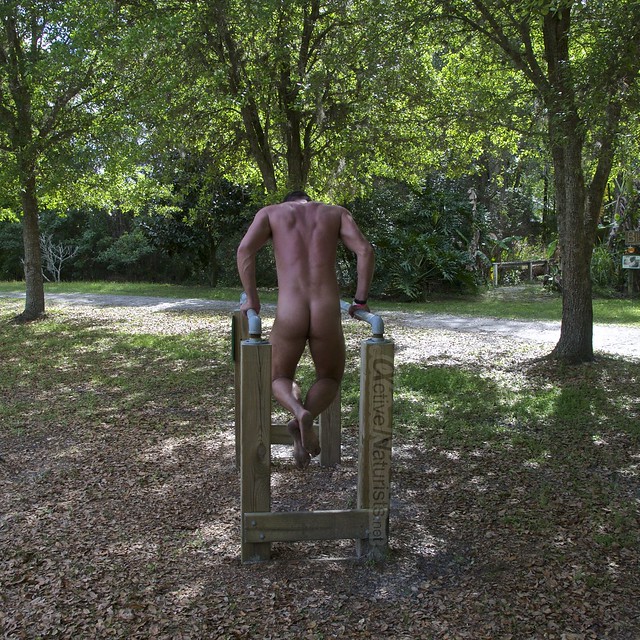 The trail around that pine grove is adorned with wooden statues, mostly of animals. 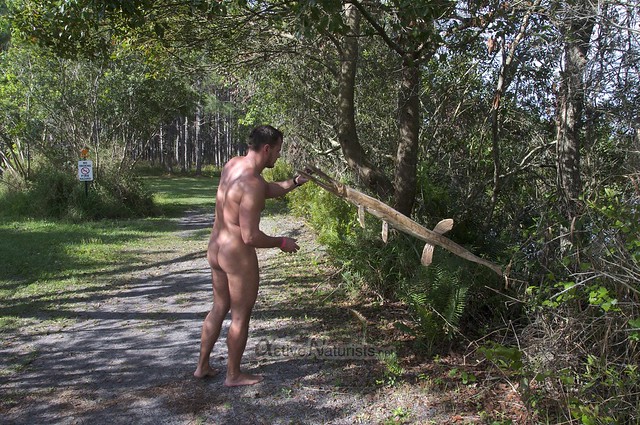 Some were more naturalistic than the others, 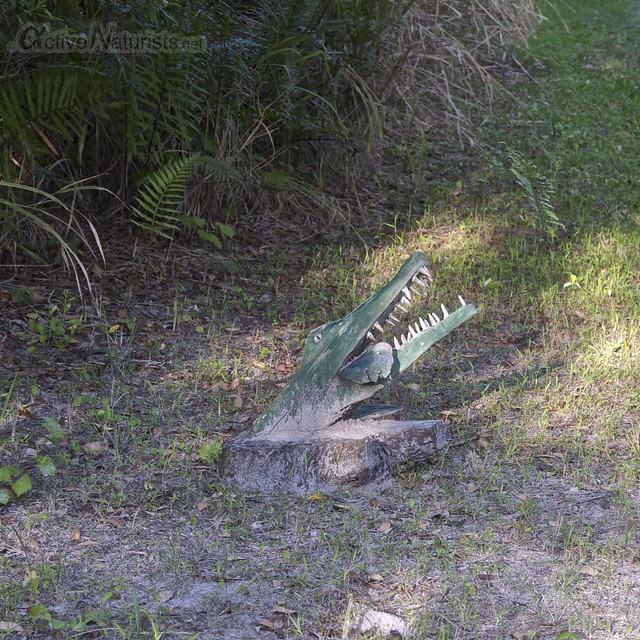 and some were clearly made to be photographed with 🙂 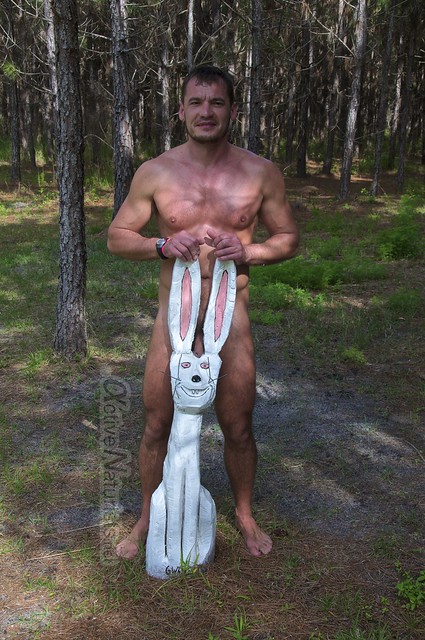 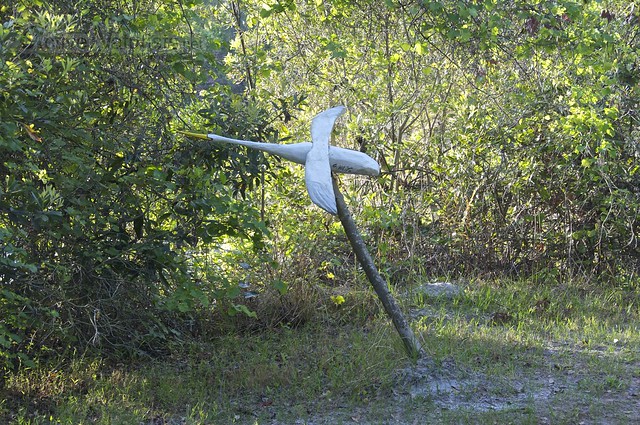 we saw some real ones too. 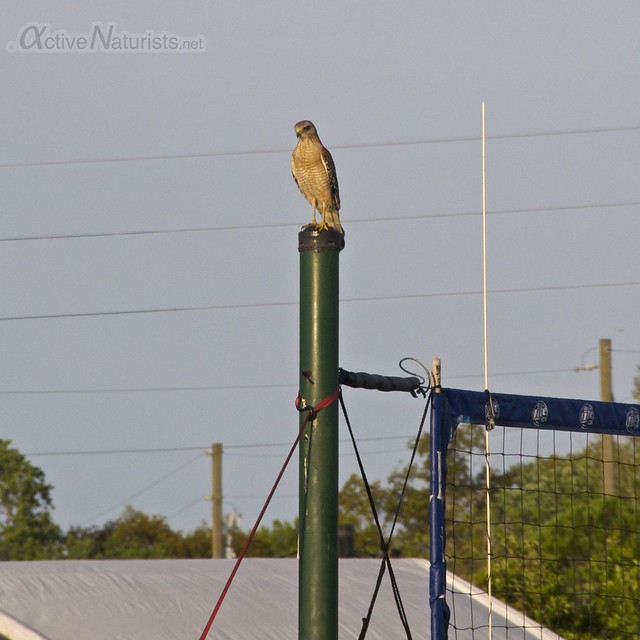 This falcon favored one of the volleyball fields as its hunting ground. 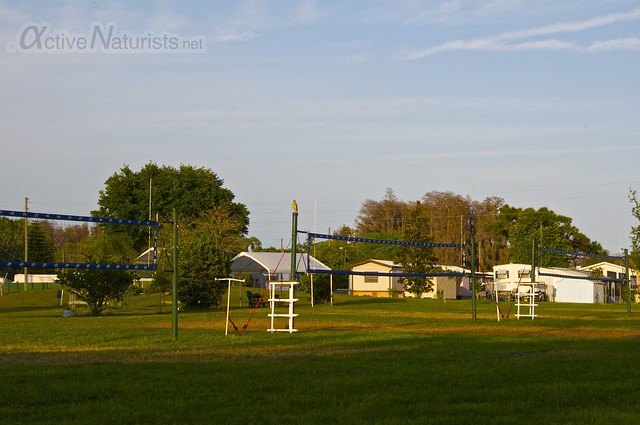 (Again, ironically, the only imagery of a volleyball field from this report on volleyball tournament has nothing to do with the game…) 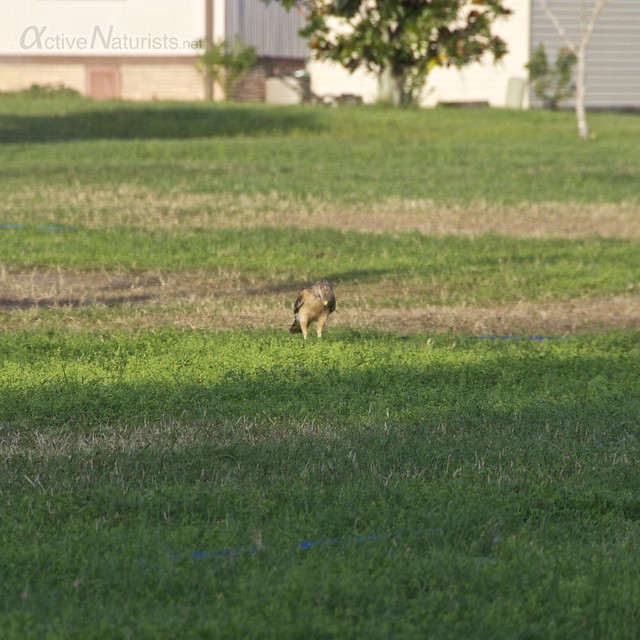 I wasn’t sure if the falcon’s hunting efforts were successful, but I was glad to be able to shoot it (with a camera!) in the nice late afternoon light. 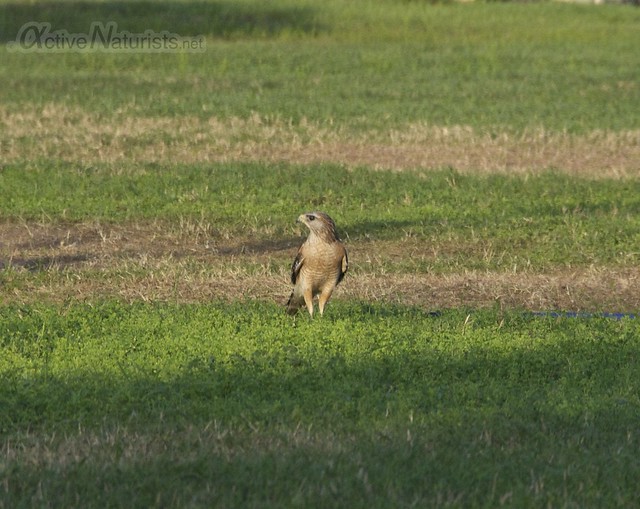 This was also a fruiting season for loquat, which we ate plenty. 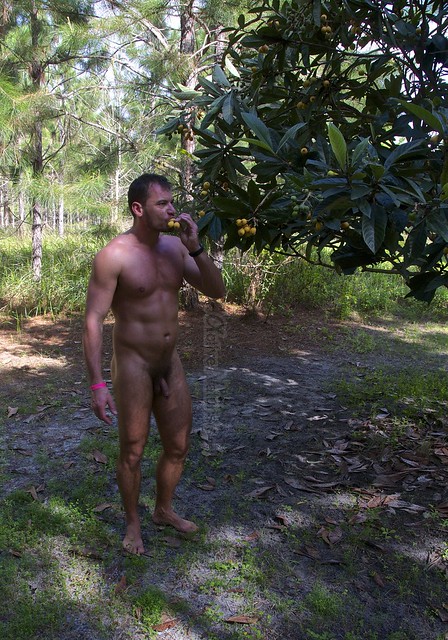 There were various fruiting citrus trees as well, but only one of the mandarins had a couple of ripe fruit at the time. 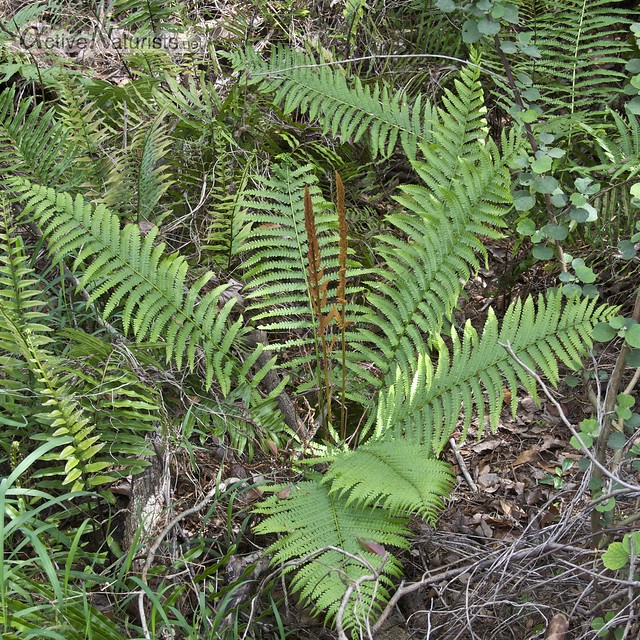 Cinnamon fern, despite the name, was among the plants that we could only enjoy visually, so as this aroid below, 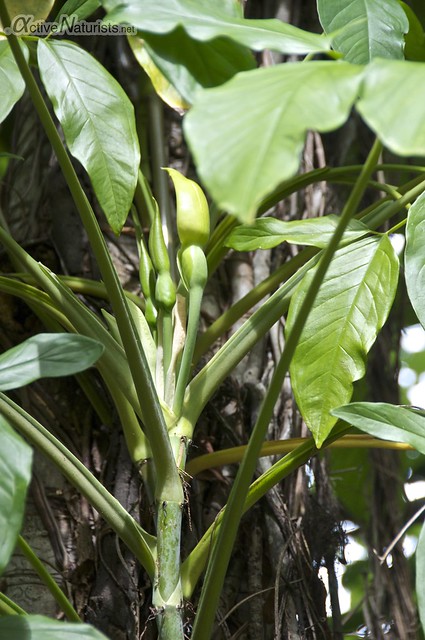 and huge Spanish moss “beards” swaying in the wind. 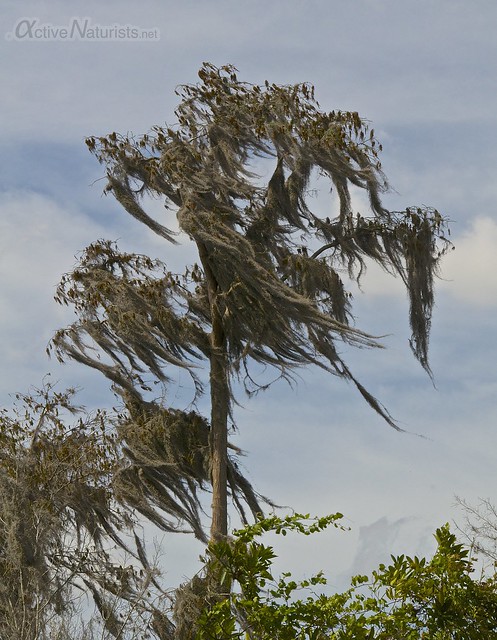 We were puzzled by some fist-sized round fruit that lied on the ground in many places without any sign of a plant that could produce them… until we finally saw one dried exemplar. 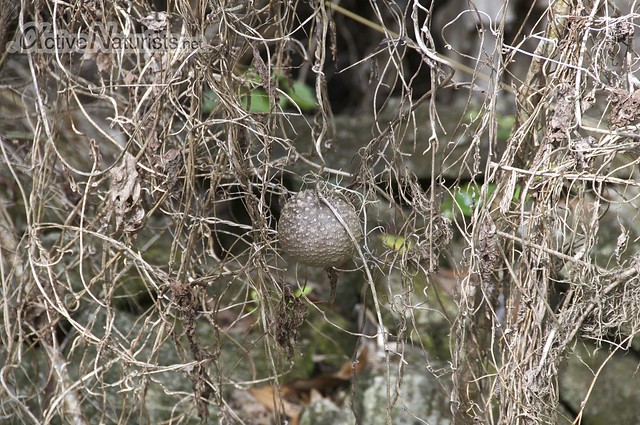 This bromeliad found a perfect spot to grow, looking as if planted there by someone on purpose. 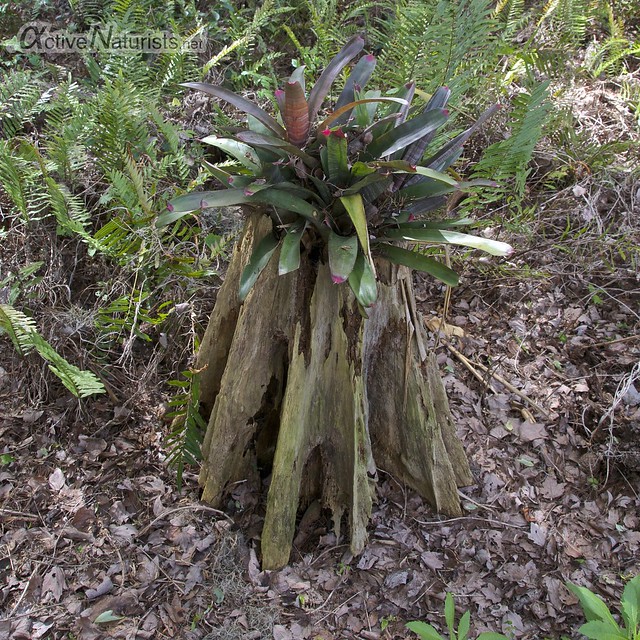 Thus, there is a couple of short but quite diverse trails at the premises of Lake Como, providing an opportunity to get in touch with a bit of Florida’s nature while being naked, as [hot Florida’s] nature intended 😉 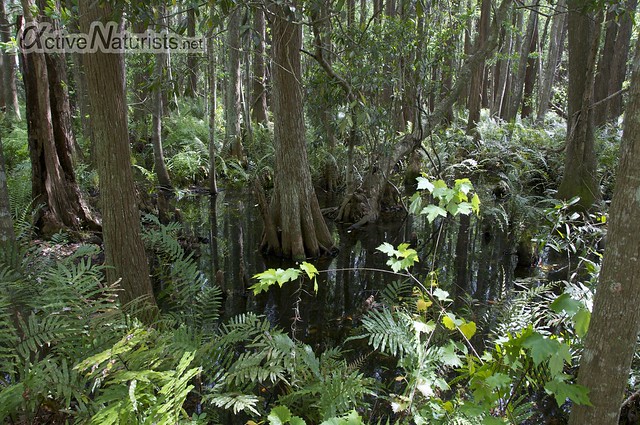 One of the trails is called ‘Sea of Ferns’ for obvious reasons.

And in addition to plants, here are two more pretty specimens from the trail: a lichen, 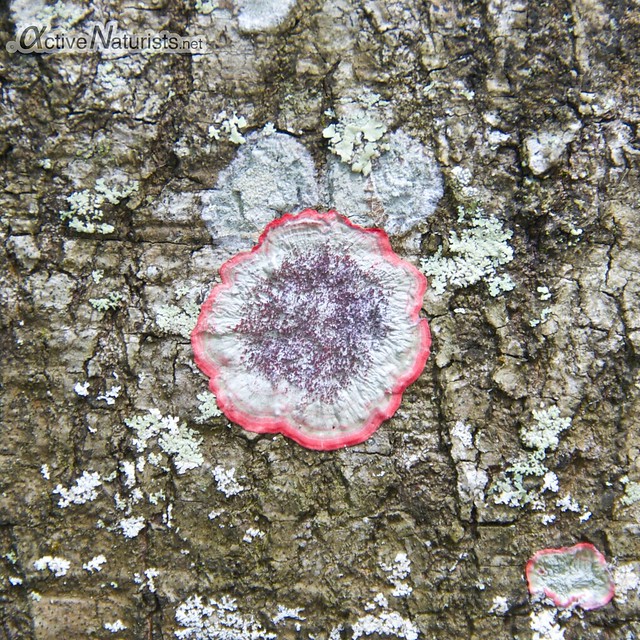 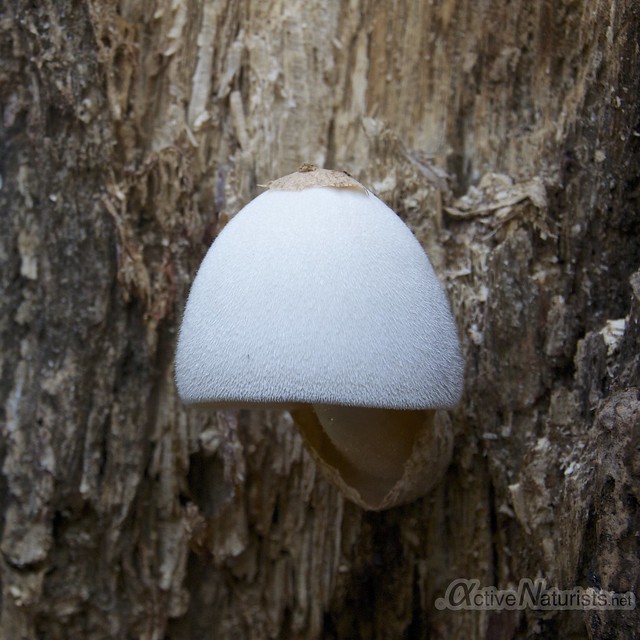 Another branch of the trail is called ‘Sunset trail’, also for obvious reasons; 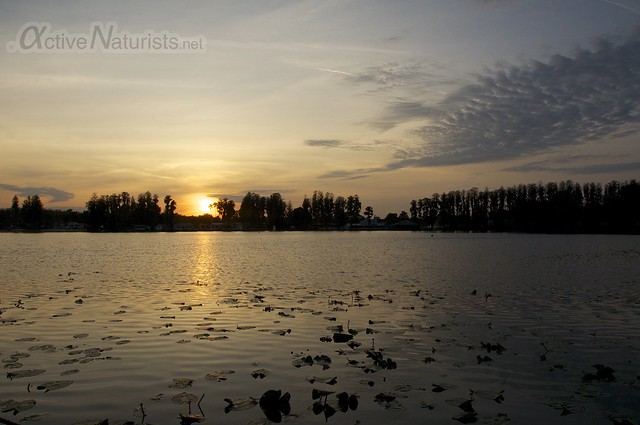 there you get a nice view of the resort from distance. 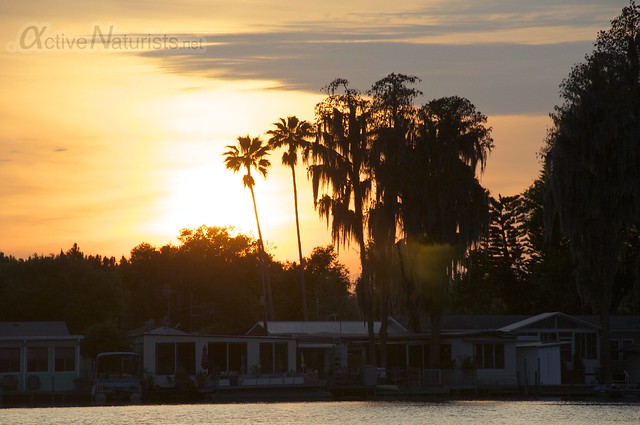 That’s about it, and if you want to hear more about Lake Como resort itself, check out the recent review from Young Naturists America.

As we were about to leave, I noticed another bird of prey right above our campsite. It made that disturbing high-pitch and quite human-like call, about whose origin many campers had been wondering, and not necessarily out of pure curiosity, as it often came about at dawn… Well, still I would shoot this bird only with my camera 😉 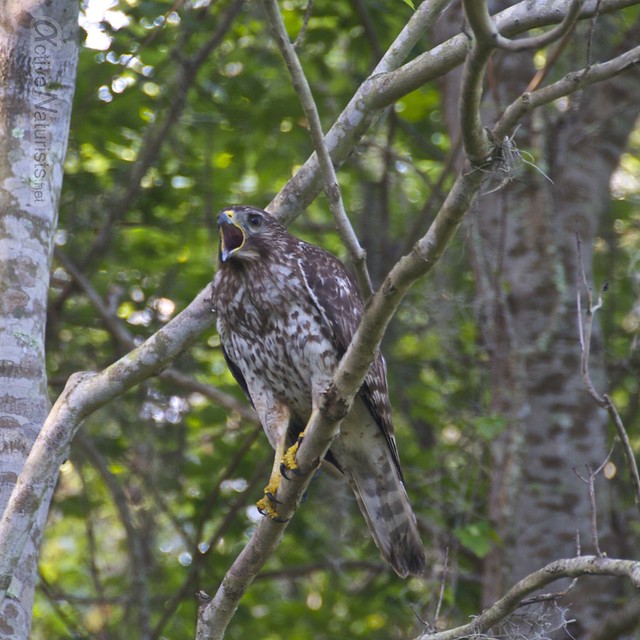 I hope I’ll be back to Lake Como next year again, to play volleyball in the buff with friends and strangers, and be ‘welcomed’ by this screaming bird 🙂